We found 9 Reddit comments about 30ft dia. Professional Weather Balloon, 1200g. Here are the top ones, ranked by their Reddit score. 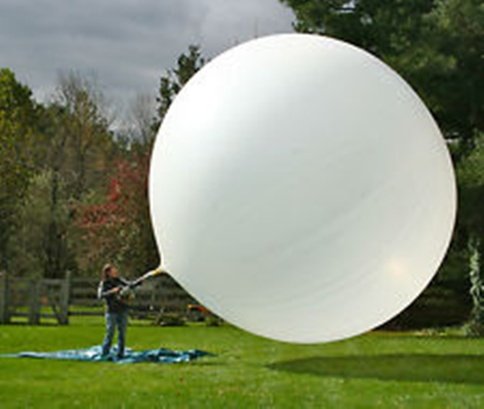 With a camera, some helium, and a $200 balloon, you can have real evidance for a flat or spherical earth. Evidence that you controlled the entire time. If you can get a picture at 92k feet that doesn't show a curved horizon, you might actually be able to present it as evidence instead of these youtube videos.

Hell, if you are around San Antonio, TX I would help get this off the ground. It would be great to watch ya'll try to explain away the footage from your own cameras.

This weather balloon from Amazon plus a GoPro. Switch out the fish eye lens, strap it to the weather balloon, it has a max altitude of 115,000 feet more than enough to see the curvature of the earth.

For less than $1000 he could prove or disprove a flat Earth. He's doing this rocket stuff for publicity

Read the reviews,
People have sent this to the edge of space already

Stratospheric weather balloons, and no, as it has been here for decades ;)

Heck, you can buy them on amazon.

https://www.amazon.com/30ft-Professional-Weather-Balloon-1200g/dp/B00513FWQI here's a cheap wether balloon, take your own photos of the horizon with a camera you have verified isn't fisheye.

Well, that's the thing, I'm not sure how sugar rockets differ from traditional model rocket engines. Then again I'm sure someone could just get the certification needed to buy an O power rocket motor, or find someone who does. You would think when making it that air would get trapped in there though, since it's just compressed by hand. There's just a lot of unknowns, since even high power model rocketry never gets to the stratosphere. It will definitely go significantly higher per stage, provided everything works as it normally does at sea level. The chances are almost guaranteed that something goes wrong though, with a relatively unstable launch platform and handmade engines that are using a powder fuel. Also, there's little way without instrumentation to detect how far it goes to see if we're even successful, so what we should hope to do is use a GPS tracking system(they actually already use these in model rocketry and with retrieving the weather balloon stations). The GPS system is probably around $300(we might need two, one for the platform, another for the top of the rocket). The weather balloon costs about $100, while the platform itself would probably be handmade out of balsa wood(if we don't care about retrieving it) or more expensive if we do want to try to retrieve it, and the multistage rocket would be hand made using ~$50-60 in materials(stump remover, cardboard tubes, powdered sugar, clay plugs), and then the cost of helium(or other lighter than air gas). We could also use a much cheaper balloon, a timing system to ignite the rocket when the balloons pop, and a single stage rocket to just do a practice run and not care about tracking it, and just trying to follow it with binoculars/telescope(you could also get a much cheaper radio transmitter that doesn't have GPS and a handheld directional ham radio and track it as it goes up - you should be able to get an idea of how high it reaches from the angle you have to point to get the strongest signal, though it leaves a lot to be desired). So there's the ideal experiment, and a super cheap version.

That depends on how big the balloons are, doesn't it?

Get a bunch of them together. Bet $500 each you can prove it. Buy one of these and a GoPro. Send it up. Profit.