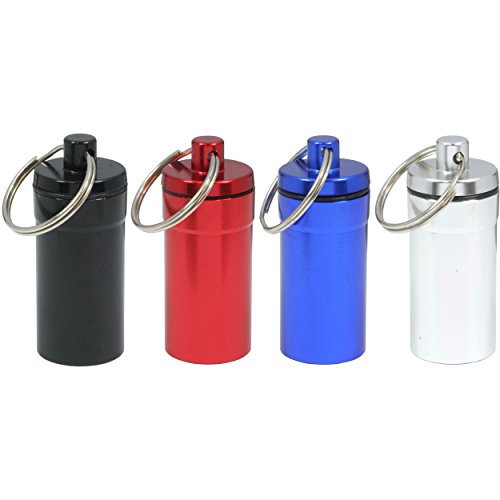 Specifically designed to hold a side putting pills in and for many other usage waysA rubber O-ring seal around the top keeps the container secure, airtight waterproof up to 30M4Pc medium size with interior dimensions - 5/8" Diameter and 1 3/4" Length including the topLightweight yet practically indestructible and made out of machined aluminumAssorted colors may vary from the original manufacture
Check price on Amazon

Moisture can break down pills, and it gets worse if you cut them in half because you're getting rid of the outer coating and exposing the center to ambient moisture.

If you're just cutting them in half, leaving them on the nightstand, and taking them the next day, it shouldn't do anything. If you're leaving them cut in half in the bathroom, exposed to the air, they're going to break down more quickly. Sometimes you can see the physical degradation of the pill, but that shouldn't happen unless you completely forget about it or you're trying to wear it down.

If you're taking them with you, use a metal pill holder that attaches to a keychain. If you're just putting them in your pocket, already cut, the inner bit is vulnerable to rubbing against the foil or the fabric as well as ambient moisture, including your sweat.

To add to this:

I use these. each color is a different kind of trees and one is for AVB.

I just grind it up and use a funnel to fill them.

Each one holds a couple few trenches, but the reason I like them is you can just tap the sides and your herb just kinda falls into the trench.

Nice idea. I would suggest whether it is Rx or not that they all be clearly labeled, so that you or someone else doesn't misidentify something and take it. I'll probably be adding something like this to my first aid kit soon. Or perhaps a set of those aluminium tube cases one for each type of pill so there is no cross contamination and to prevent a leak from ruining all the pills at once. Each individually colored and labeled.