We found 7 Reddit comments about A Girl Called Jack: 100 Delicious Budget Recipes. Here are the top ones, ranked by their Reddit score. 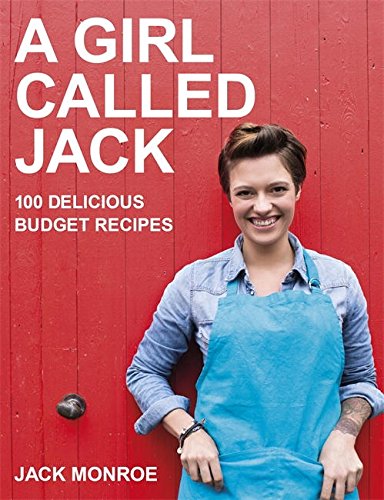 My wife and I try to cook at least one meal a day from scratch. We have old favourite recipes to fall back on and love to try new ones.

It's a great way to get good food, spend time together and learn new skills. It's actually cheaper that pre-prepared meals too. Jack Monroe's cookbook is a great place to start.

So I went and read that report you referred to (or at least, what they said in the Washington Post about it):-

I must admit that some things do sound a little odd to me. For example, here is one passage from the Washington Post article:-

&gt;“I’m not going hungry per se, but there are days I’m just not going to eat,” she said. “Today, I am kind of hesitant to buy food, because I have less than $100 and I need to do laundry. Do I want to do my laundry or do I want to eat today? That is the kind of question I’m dealing with.”

OK, so I'm a bit confused here. Does doing your laundry in a laundromat cost the best part of $100 in the USA?

Is food really so expensive in the USA? If I walk down to my local British equivalent of Kroger or Walmart I can easily find a 16 ounce frozen spaghetti bolognese or chicken curry with rice or shepherds pie that is going to cost me a pound (US$1.40 - and that's including tax) that I can quickly do in the microwave in four minutes without any problem.

Do these sort of things not exist in the USA? The spiritual home of fast food?

Then. I know that it can be a real pain to cook for yourself while at university - but there again I managed it living with three other guys and we didn't starve or live off take outs (apart from a Saturday night kebab [gyro for Americans] after a couple of beers).

I think that u/horse19 referred to this in another reply but it is certainly more than possible to live spending US$100-150 per month on food.

For example, there is an English food blogger, author and activist by the name of Jack Monroe (she's also done a TEDx talk here )

This is a bit about her on Amazon:-

&gt;Jack was a cash-strapped single mum living in Southend. When she found herself with a shopping budget of just £10 a week to feed herself and her young son, she addressed the situation with immense resourcefulness, creativity and by embracing her local supermarket's 'basics' range. She created recipe after recipe of delicious, simple and upbeat meals that were outrageously cheap. Learn with Jack Monroe's A Girl Called Jack how to save money on your weekly shop whilst being less wasteful and creating inexpensive, tasty food.

and this is the blog:-

There is a similar author in the US that I'm aware of by the name of Leanne Brown:-

&gt;Cheap Eats: A Cookbook For Eating Well On A Food Stamp Budget
&gt;
&gt;When Leanne Brown moved to New York from Canada to earn a master's in food studies at New York University, she couldn't help noticing that Americans on a tight budget were eating a lot of processed foods heavy in carbs.
&gt;
&gt;"It really bothered me," she says. "The 47 million people on food stamps — and that's a big chunk of the population — don't have the same choices everyone else does."
&gt;
&gt;Brown guessed that she could help people in SNAP, the federal government's Supplemental Nutrition Assistance Program, find ways to cook filling, nourishing and flavorful meals. So she set out to write a cookbook full of recipes anyone could make on a budget of just $4 a day.
&gt;
&gt;The result is Good and Cheap, which is free online and has been downloaded over 700,000 times since Brown posted it on her website in June 2014. A July 2014 Kickstarter campaign also helped her raise $145,000 to print copies for people without computer access. And on July 21, the second edition was published with 30 new recipes.

It's also available on Amazon:-

Now before anyone starts saying that the recipes are likely to all be tofu and lentil burgers - no that isn't the case. I just had a quick check on her blog and one of the latest recipes was Sausage &amp; Bean Casserole which, quite frankly, was exactly the sort of thing I lived on in university.

She claims that this recipe would feed four people at a cost of 60p (84 cents including tax) each. If this was a family of four with two children I could quite believe it but, if it were teenage guys living at university then it would probably only feed three. But there again, that still only works out at 80p (US$1.13 including tax) each.

I certainly remember that I had to be very careful indeed about what I spent my money on - are things really that significantly different nowadays? Or are students choosing Netflix over food?

If you want to feed him, cook for him but don't be giving him money because you can't trust his judgement.

There is a British one. A Girl Called Jack don't buy it from amazon, check ebay and other 2nd hand book places. Or keep an eye on the amazon kindle price (she's knocked it down to 99p a few times).

It's the premise of the entire book, and a later one called cooking on a bootstrap.

If you really can't afford it, check out her website. She archives all of her recipes on there, she also blogs political stuff aimed at the austerity stuff in the uk, because she's been there. But you don't have to read through it to get to the recipes.

Any techniques she mentions that you're not sure on, have a look as t the BBC Good Food website, they usually have tutorials for anything little bit complicated.

I wish she'd been writing cookbooks when I was in that position!

She's gone vegan in recent years, but not all of her recipes are because she started writing cookbooks before she went vegan, and she still writes non-vegan recipes because she is writing for her audience. Although, there's not loads of meat because its expensive.

Her newest book, tin can cook, is aimed at people who are relying on food banks, most of which give out tinned food to people, so if you are in that situation, there are recipes for that too.

And I'd also head over to r/frugal to help get through your financial stuff, if you haven't already. Most of us have been there and it's shite, but you can get through it. I think the best advice I ever got was to sit down and deal with it head on, make a full list of how bad it is so you can make a plan to deal with it.

Good luck and if you just need to talk to someone, to vent or anything, I'm only an inbox away x

I find the recipes by Jack Monroe to be delicious as well as very cheap to cook. They're on the website Cooking on a Bootstrap but I think the book A Girl Called Jack is definitely worth the money.