We found 11 Reddit comments about A Guide to Old English. Here are the top ones, ranked by their Reddit score. 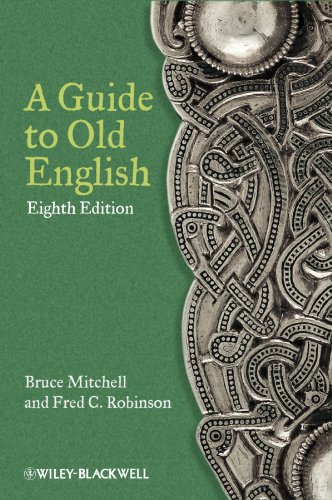 I'm really glad you enjoyed my reply. It's difficult to learn about these things, unfortunately, and it takes some special study. It's a very foreign time period, and because we know so little about Anglo-Saxon England, everything we do know has been very hard to come by. The world of AS scholarship is very small, and there is very little incentive to reach out beyond that world.

But don't stop pursuing it! When I was in high school, I hated Beowulf and used to joke about how bad it was. We read a terrible, outdated translation from a text book and it couldn't have been more boring. It wasn't until I read the original in college that I saw something in it. But I have the highest respect for high school English teachers. I remember telling my English teacher in my senior year that I was going to be a literary critic, and she told me she believed I would. I can still hear the sincerity in her voice to this day, and it motivated me for years. Actually, now that I think of it, it still does. You do incredible work and probably don't even know it most of the time. I can tell you that I never saw Mrs. Fennimore after leaving high school, and it took me years of reflection even to realize that I'd been so deeply influenced by her.

As to how I know all this crazy stuff: I studied OE for years, ultimately culminating in a phd in English, and I can tell you that OE meter is not something that even many professors of OE lit have a strong grasp of (it was just something I was particularly interested in, so I learned a lot about it). I was lucky enough to study with some of the world's best medievalists, and I learned history (it was my minor), paleography, codicology, dialectology, and historical linguistics, in addition to reading the literature. Most of the professors who were influential to me are retired now. They were old school, and had a very different perspective, and different training, than many current medievalists. The old guard talked about "training" and a "well trained medievalist" like you'd talk about a well trained doctor or mechanic, and I love that. My dissertation adviser is thanked by Heaney in his translation, and produced an illustrated version of it for Norton (it's a beautiful book!).

But academia was not for me. I couldn't help but look around at all the incredible research we were doing, and wonder why no one knew about it. I was in England visiting libraries to do some codicological work one time, and a man and woman struck up a conversation with me in a small, local museum in Winchester (which used to be the capital of England in the AS period). They asked me what I was doing there, and I mentioned that I was studying the Anglo-Saxons. It turned out that they hardly knew who the Anglo-Saxons were or what they did. This struck a chord for me, and I realized that I wanted to do something different with ancient history.

I loved teaching more than anything else I ever did in academia, but there are a lot of sacrifices in time and energy just to keep your job. I made the decision to try to do something else with all the incredible research we've done on the ancient past over the course of the 20th century. It just seemed such a shame that it all seemed so inaccessible to everyone but hardcore specialists. I don't see the point in producing so much incredible research, that people have devoted their lives to, while it just gathers dust in the library. And academia, as you probably know, doesn't recognize anything but monographs and articles as worthy of the scholar's time. I had to choose whether to keep on doing what I was doing, or strike out and try to express all this incredible stuff we've learned about the ancient past, and what's more important, the incredible feeling of engaging the past.

So to do that, I've begun working on the first of what will hopefully be a series of historical novels. If I accomplish a fraction of what I hope to do with the first one, I'll be happy. If few people read it, that will be fine, because no one read my academic stuff either, outside of the very small world that is the International Society of Anglo-Saxonists! As for work, well work's work. It's there to pay the bills so you can do the important stuff.

I wish I could point you in the direction of some resources for self study of OE lit, but there isn't much out there. If you have the time, you could work through a book like Mitchell and Robinson's Guide to Old English, which is what I first learned with. I know that Richard Hogg's An Introduction to Old English is well respected by some of the Anglo-Saxonists I know too. If you know anything about German or Latin, the grammar won't be so foreign to you, since Old English is a case based language. But even if you don't, you could still learn to read OE with some determination and a few months time. To be honest, reading Beowulf is hard, but most other OE poetry and prose isn't that challenging once you get the hang of it. The Beowulf-poet is legitimately on another level though--Beowulf is the crown jewel of OE lit, and reading it with pleasure takes work but it's definitely worth it.

Thanks for your interest. Good luck with your studies!

It’s a great little book, Mark Atherton is a brilliant scholar of Old English (and his work on Tolkien is equally good, if you’re a fan). It starts very easy, then works up through real texts and cultural context. The same is true of Hough &amp; Corbett’s Beginning Old English– lots of original sections of prose and poetry, starting with basics and building enjoyment alongside the language.

If you want something that’s more academic from the start, I’d recommend Peter Baker’s Introduction, which contains a good grounding in grammar more generally, or the more linguistics-based one by the late Richard Hogg. The best overall textbook is undeniably Mitchell &amp; Robinson’s Guide – but it is dense and (despite what the authors claim) not easy to use in independent study. Their sections on syntax are vast and comprehensive, however, so that might be what you’re looking for.

It's great that you're interested! However, you're asking for two different things.

This should be a nice book of the [Anglo-Saxon Chronicles] (https://www.amazon.co.uk/Anglo-Saxon-Chronicles-Michael-Swanton/dp/1842120034/ref=sr_1_1?s=books&amp;amp;ie=UTF8&amp;amp;qid=1521744983&amp;amp;sr=1-1&amp;amp;keywords=anglo+saxon+chronicle) in translation, for a non-academic reader.

As for the language, that's a bit more tricky. As Old English is basically only taught at universities and the ubelievable greed of academic publishers, the prices are more than 20 pounds or dollars for a paperback copy. And these are textbooks for learning the language, mind you. They will explain the pronunciation, the case system, the nouns and adjectives, the grammatical gender, the declension of verbs, the poetic metre, etc etc. They also have some shorter texts in Old English, both poetry and prose, with a glossary at the end.

There are not many grammars of OE out there that cover syntax. If you want a quick overview for beginners, you could read the first half of Bruce Mitchell and Fred Robinson's Guide to OE. Mitchell, who recently died, was the expert on syntax (If you want all the details, check out his two-volume Old English Syntax from the library.). You will find most other grammars of OE cover phonology and morphology and that's about it. There is, however, a small section in Lass's OE: A Historical Linguistic Companion.

As for Middle English, I don't know the bibliography as well, but the introductory Book of ME by Burrow and Turville-Petre have a short section on syntax.

I have A Guide to Old English, Introduction to Old English and Old English: Grammar and Reader at home and they all are pretty useful if you are interested in the language (plus Clark-Hall's dictionary). I've never tried to study it as a live language - I just wanted to read some old texts :)

There is also Complete Old English - not sure how good it is but you may want to look at it.

I guess for next time, if there will be, I will have to read up more thoroughly on my source and cite it. You are right though, that an academic community demands the same level of rigor and proof.

To my knowledge there isn't an online translation tool for Old English. UToronto has a dictionary/corpus that may interest you.

If you can get it, the Mitchell and Robinson Guide to Old English is a great book for learning translation (though they do standardize the OE texts substantially).

When I took an Old English module a couple of years back we used a couple of different resources for learning the language: