We found 8 Reddit comments about Abus U Mini 40 Mini Round Shackle U Lock, 5.5"/15mm Heavy Duty Compact Bike Lock. Here are the top ones, ranked by their Reddit score. 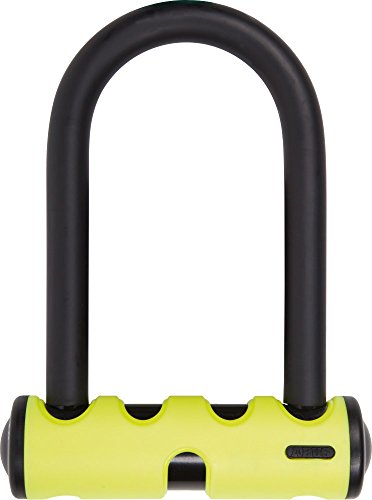 GERMAN ENGINEERED 14MM HARDENED STEEL- Abus uses only the highest grade, special temper hardened steel for its components and has been doing so since 1924. These decades of experience and commitment to quality have made Abus one of the premiere lock manufacturers, keeping people’s bikes safe across the globe.INDUSTRY LEADING CORROSION RESISTANCE- Don’t open yourself to easy thefts by using a degraded and corroded lock. Abus’s corrosion resistant coating and through-body shackle technology featured on the U-Lock keeps your bike secure for years.LIGHT WEIGHT AND COMPACT- The U-Mini 40 lives up to its name by wrapping an incredibly strong, durable and secure bike lock into a small unit that can easily fit in your back pocket, won’t weigh your bag down in transit, and easily mounts to your frame.ABUS PREMIUM CYLINDER PROTECTION- The general idea of a bike theft is that someone came with bolt-cutters and after slicing and dicing through your bike lock, they took off on your ride. This isn’t the only form of attack though and this is why in conjunction with the absolute best torsion resistance, Abus offers you their Premium Cylinder technology that protects the entire locking keyed mechanism from lock picking.DOUBLE BOLTING SHACKLE- The Bolting Mechanism locks in two places, offering an elite level of security and doesn’t leave any weak spots in the armor for a bike thief to take advantage of. The U-Mini 40 makes it incredibly simple for you to ride where and when you want without fear of what could happen to your bike when you’re not rolling. The Soft Touch Coating even ensures that your paint job won’t get the slightest hint of a scuff.
Check price on Amazon

The weight of the kryptonite mini U but the shackle locks on each side so you have to cut through each side to open the lock, just like the $100 Kryptonite NY standard and fahgettaboutit.

Its a small shackle but I use the Sheldon method all over Chicago with this lock and never have to look for a place to lock up. Also don't just buy a lock based on the price of your bike, buy the lock based on how inconvenient/ badly you want the bike to be there when you get back. I have had to leave my bike out overnight way more times than is wise and it, and my bike have always been there when I get back.

The Kryptonite Standard 2 is not going to be cut easily with bolt cutters. Proper locking technique will go a much longer way to bike security than lock upgrades. Don't be this guy.

Bike thieves are largely opportunists. Good locking technique, securing both wheels, and using a decent u lock should prevent 99% of issues. You can't prevent 100%.

I found that the Standard 2 was sufficient for me, though I've switched to the Abus Mini 140, which is a bit tougher and only slightly more expensive.

In your situation, I would get the standard 2 + cable, or the Abus mini and a set of locking skewers if you wanted to upgrade.

Having a second u lock exclusively for home (double lock when at home, take one when out and about) is reasonable -- but probably not necessary. You could buy two Standards for less than one Faghettaboutit anyway.

Don't buy the Faghettaboutit without thinking about securing your wheels, too.

How much you willing to spend? The best money can buy is the Kryptonite Fahgettaboudit but it's pricey.

What I use is the ABUS one. Used it ever since freshman year and still have my bike.

I would suggest ABUS locks, I agree with the other guy ortlieb panniers are amazing! I would also take into consideration what clothes you need to bring to work, amount of clothes, food, etc. If you don't want to carry a backpack but need too carry a fair amount of stuff snag some ortlieb panniers.
Of course a nice pair of lights, i just got my lumos helmet (built in lights and turn signals!). Figuring out layers that you could wear, base layer, maybe wool long sleeve possibly a light jacket?

if you don't want to have to change clothes at work i also really like the betabrand bike to work britches and jeans! check em out on Valancia street.

I recently started using an Abus Mini 140 in conjunction with a cable for my wheels, after using cheap Kryptonites for years. It's small, thick, and has a double shackle. (Kryptonite's double shackle locks are the very heavy and expensive ones). Since its size is minimal, a potential thief can't fit a car jack inside it, and a pry bar won't have much leverage.

Been happy with it so far. Even though it's not big enough to lock a wheel and my frame simultaneously, it gave me a good excuse to carry a cable loop for the wheel I was always neglecting for years anyway. Frame to post with the U-lock, then loop the cable through both wheels and hook it on each end of the U-lock before putting the head back on.

This is their equivalent to the Mini.

A post I made about bicycle security practices is here.

do you still use the krypto with the mini?

https://www.amazon.com/dp/B004HXJRA0/ref=twister_B005F3GW9A?_encoding=UTF8&amp;amp;psc=1
This is the U-lock that I have, does its' job great, but really any will be a step up from the cable lock. Also in general the smaller the U-lock the safer it is.