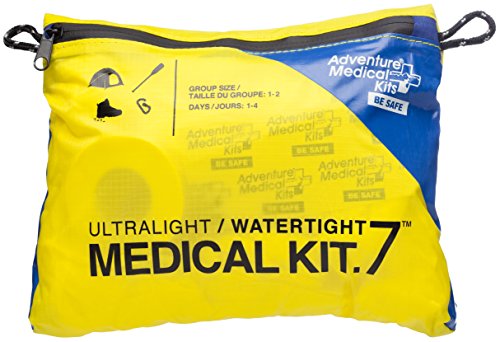 This one is the one I plan on picking up Friday. It is waterproof which is a big plus and seems to have a good selection. I watched a review video on youtube where they listed everything. Once I get it I will be going over what I should add with my brother who is an EMT.

What price range are you looking for? Do your parents generally spend over $100 on your for gifts?

Here are some basic ideas:

This is the exact one I take with me everywhere. Only weighs 6oz. I throw it in my summit pack when doing multipitch, hardly even notice it's there...until I need it.

I never go out without a med kit. This is a nice one. https://www.amazon.com/Adventure-Medical-Kits-Ultralight-Watertight/dp/B000G7WRBC/ref=sr_1_3?ie=UTF8&amp;amp;qid=1480984349&amp;amp;sr=8-3&amp;amp;keywords=waterproof%2Bmedical%2Bkit&amp;amp;th=1

I carry the Adventure Medical Kit .7 in my back pack. Depending on your level of training, you may want to look at quick clot, a tourniquet, maybe extra bandages and trauma shears. It really depends on what you think you might need to use it for. This is a cool video, he goes into his first aid kit around the 8:50 mark

I have placed an order with everyone's suggestions in mind for a starter BOB. Thank you everyone for your input.

Here is what it is looking like so far:

Bag: I'm just going to use a northface bag I have that still appears new after 4+ years of use. Was my college bag originally so was used everyday. Very well built.
Here it is for reference

Knife: Since I freed up some money, I went ahead and picked up the Kabar also grabbed a leather sheath. Hopefully I don't get flack for it having a USMC logo on it. It is their knife anyway after-all.

Multitool Decided I probably would need a multitool of some sort.

Nalgene bottle and cup Thanks for alerting me to the cup, I didn't know these exist and should come in handy.

First aid kit based on suggestions.

Saw chain was questioned but after watching the user video of him sawing through a tree in like 5 seconds I'm sold. I've tried cutting wood with machetes and hatchets and it is a PITA.

Emergency Blankets can't be too warm I feel.

Rations I will be taking at least 6 days worth.

Emergency Tent Will need to see how big this is. I might just get a tarp for my eno.

I also have a Ruger LCP with ~100 rounds I will toss in. I need to make copies of all of my documents to include. I already have a tactical flashlight to put in but will need some extra batteries. I have extra glasses to include. Have some flint and steel and bic lighters to include. Considering some sort of magnifying lense. The eno hammock, some jeans, a sweatshirt, rain jacket, and cap will be included. Also some sunglasses. I need to grab some duct tape, charger/radio, some sort of ereader or survival book, and probably a dozen other things I can't think of right now.

I will also need to make one for my 100lb black lab since I realized I wouldn't be able to leave him behind. Going to start training him to hike and carry a pack etc to have him ready. Ultimately he could become a major asset.

I stay in the States (at least for now), and have this first-aid kit with me.

It's not perfect certainly, but I ride street and don't get far from civilization. I adore how compact these kits are.

For that price you won't be getting ultralight on the big 3: backpack, sleeping bag, and tent. Unfortunately those are the largest, heaviest, and most difficult to go light weight on a budget. The majority of the other items are pretty good UL gear. You can, for example, get a lighter titanium stove. It'll save you about 2oz and double the cost. Eventually the 2oz there and a few more oz here and there on a number of pieces of gear really add up so you may want to swap it out as you upgrade your gear over time. But for right now one in the price/weight range I suggested is really good ultra light weight bang for your buck.