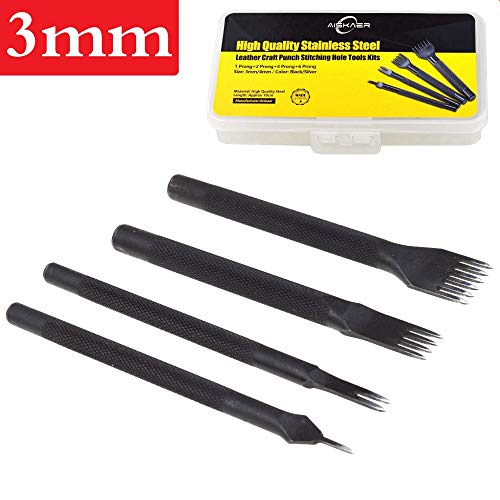 The skull is great, but the stitching and edges could use work.

I highly recommend you look into getting a set of leather stitching punches like these (I don’t know anything about this brand in particular, just linking to an example). It makes hand-stitching way easier and indistinguishable from a machine stitch in terms of aesthetics.

The cheap route of producing a wallet you'll be happy with:
Sharp knife(exact or utility work) like $5-$10 if you don't have one

Diamond Chisels- $18 3mm https://www.amazon.com/dp/B006OVYU5K/ref=cm_sw_r_cp_api_jo-PBb7M287N4
There are cheaper ones but I've used these so its what I can recommend. You could just use a cheap Awl to punch holes but it won't look nearly as nice since it's your first project. If you go the awl route then make sure you get a small one

Thread- $7 Ritza 25 Tiger thread .06mm at Rocky Mountain Leather Supply. You can cheap thread but it is harder to work with and doesn't look as nice imo.

Needles- Use the smallest needles you have that will fit the thread, if you don't have any needles then get John James Saddlers Harness Needles Size 4, $7.50 at Rocky Mountain Leather Supply


Those items will let you make a decent product. You still may want something to clean up edges. If its veg tan you might want an edge beveler and you can use a piece of canvas or jeans to burnish. If it's chrome tanned then you'll want edge kote($8) or something similar. Or you can just leave it as is if you like that look since it's your wallet.

In doing my research, I found that the kits on Amazon had a bunch of things that aren't really necessary or particularly helpful. So I opted to build my own.

Instead of a kit, I would walk into a Harbor Freight and buy a wing divider, blow hammer, knife set. Then order a diamond chisel set, skiver knife, and edge beveler. That is a $50 set, that although inexpensive, is going to be better than the all-in-one sets off amazon. You can likely find an old kitchen cutting board, sand paper and ruler around the house (if not a ruler is cheap at Harbor Freight). I grabbed some needles from my mother because she quilts, but you may need to buy a couple of those.

Most sets don't include consumables (leather, quality thread, glue) so I did not include those in the list for comparison. The kits often include items that aren't necessary or are genuinely useless at least for starting out (thimble, groover, multiple of the same tools, 4 different awls, stitch markers when you have chisels, items your not interested in like bad thread, cheap buttons, etc.)

I suggest this style upfront for all hobbies (inexpensive but not crap) so people can get a feel for what they think is worthwhile to upgrade. While some of the items will prove to be plenty sufficient.