We found 18 Reddit comments about American Born Chinese. Here are the top ones, ranked by their Reddit score. 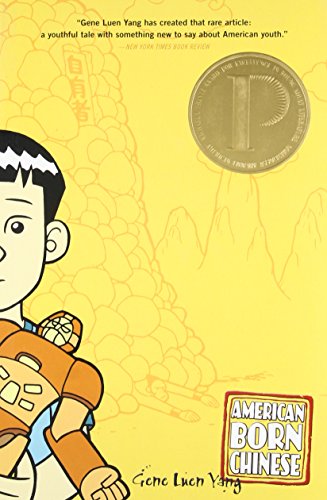 I recommend the graphic novel, "American Born Chinese" by Gene Luen Yang. It is a coming of age story of a Chinese kid dealing with his identity (the good and bad). It really resonated with me.

Being Asian American is something unique and weird, the hardest part is that you feel normal, but everyone around you treats your like you are different. Let me just say as an older Asian American having been through it... you can never change enough for people not to see you as Asian. You have to accept who you are, embrace your identity because your identity does not change. It is a part of you, just like everything else. The harder your run away from it, the more painful it is when you are snapped back to reality.

I don't read a lot of action-y graphic novels, so I can't really help you with finding more stuff like Watchmen, Wanted, etc. (However, you have to promise me you'll read Frank Miller's The Dark Knight Returns.)

But I can recommend more laid-back graphic novels if you're ever in the mood for something different! Give American Born Chinese, Anya's Ghost, or Daytripper a shot sometime.

Persepolis and Maus are also graphic novel must reads, no matter what genre you usually favor. And Scott Pilgrim was super popular recently, with great cause.

And, if you're willing to settle down for a long haul and read your comics backwards, I really can't recommend Fullmetal Alchemist enough. 27 volumes, but it's the best action series I've ever read and one of my all-time favorites of any sort of media. Check out a stack of it from the library and you'll fly right through it. That's what I did one afternoon, and my time has never been better spent.

Barefoot Gen is written by a survivor of the atomic bomb on Hiroshima. It's very moving and raw and personally I think it's better than Maus or Blankets. It should be required reading in all schools.

Persepolis is another amazing read. It's written by someone who grew up in Iran and witnessed and ran away from the revolution in the late 70's. It shows that the people in Iran and that part of the world are just like us, though because of America's (and other foreign powers) intervention, has become really conservative and hostile. I think this is another book that should be required reading in schools.

Fun Home is another personal tale about a woman's recollections of growing up and about her father.

American Born Chinese Gene Yang writes about growing up as an Asian American.

Epileptic French, David B writes about his Epileptic brother.

I'm really excited for this series. Yang is one of the best writer working today and I've read a lot of his work. American Born Chinese, Boxers and Saints, The Shadow Hero and his Avatar Books. He's one of those writers who writes an all age books that can be enjoyed by a teenager or someone in their 30s and different people can take away different things from his work. His writing is very simple but it also have all these fantastic ideas and delve in mature themes. Best comparison I can make is his work is sort of like a Studio Ghibli film. I hope this book does well and I hope it can add a lot to the legacy of Superman and mythology of DCU.

If you're not convinced, get American Born Chinese. It might not convince you to pick up New Super-Man but you'll definitely have read a fantastic book.

&gt;ive been in US for twelve years, and its always the westernized asians having this identity crisis.

Since this is the comicbooks subreddit, I'm simply going to recommend reading American Born Chinese by Gene Luen Yang. I feel like it does a good job at explaining a lot of the issues felt by second-generation immigrants in the US.

Have you thought about using a graphic novel? They're quicker to read and might appeal to students who aren't as engaged with regular novels. My English teacher friend teaches American Born Chinese as part of her seventh grade curriculum; I don't know if it would be accessible to sixth or not. I also found Laika - about the dog who was the first animal in space - to be a good, thought-provoking graphic novel, and it could lead to some very engaged discussions in the classroom.

how about comic books (Graphic novel)?

The protagonist is Japanese American but it's the same struggle of the Asian American male's identity, relationship and hankering of white women.

Just my opinion but I didn't like Blankets all that much...Fun Home is awesome though!!

But, in addition to the others mentioned:

Drinking at the Movies

Ooh! I used to love reading new things that teachers left out for us when we finished tests early or whatever. I don't know what kind of reading you typically arrange, but can I suggest bringing some comics? Even when the subjects aren't distinctly for teens, the medium can be a good way to introduce new topics and characters that they typically wouldn't pick up (kind of like your "ooh, Teen Vogue -- just kidding, it's also political news" plan).

Off the top of my head, I can recommend March, which is about John Lewis and the civil rights movement; Ms. Marvel, who is a young Muslim American superhero; American Born Chinese, which is a really well done coming-of-age story. Just something to consider if you ever want new things to bring in for teens.

On the distorted view on American Perception of China:

The Problem of China - https://www.amazon.com/Problem-China-Bertrand-Russell/dp/0851245536

I know what you're saying. I would attribute a lot of this to (1) parental influence and (2) model minority effects.

OP, you would probably really enjoy this graphic novel by the great Gene Luen Yang: https://www.amazon.com/American-Born-Chinese-Gene-Luen/dp/0312384483

I've posted this before, but I'd recommend:

Infinite Kung-Fu is a really cool and gorgeous kung-fu comic.

King City is hilarious and fantastic.

The Nao of Brown is great, but a lot more serious the other two.

Same with Asterios Polyp, more serious but it's a beautiful book and a really good read.

American Born Chinese is a great book about appreciating your identity.

For anyone who hasn't read it, I'd recommend reading American Born Chinese, it about the monkey king and its written and illustrated by Gene Luen Yang who also did the Avatar graphic novels.

Instantly subbed, these guys are cool.

Also, if anyone wants a little after story of Sun Wukong getting out from under the mountain, you should read American Born Chinese, it's a great comic about Sun Wukong mellowing out.

Fresh Off the Boat by Eddie Huang - This memoir is what the upcoming ABC sitcom is based on, and it's what WSJ journalist Jefff Yang has said, if unedited, will be "a game-changer for Asian Americans on screen." It's a witty and insightful story of how Eddie Huang bridges his old school parents' background and the American lifestyle of hip-hop and Air Jordans.

American Born Chinese by Gene Luen Yang - graphic novel that weaves the story of the Chinese tale of the Monkey King, a second generation kid who moves into a primarily white neighborhood and doesn't want to be considered a "Fob", and a white American boy whose Chinese cousin "Chin-kee" visits.

No-No Boy by John Okada - A Japanese American returns home after being interned during WWII and struggles with where he belongs in US society. The term "no-no boy" refers to how interned Japanese Americans answered to a "loyalty questionnaire."

Native Speaker by Chang-rae Lee. The protagonist is Henry Park, a Korean American whose identity as an American with a Korean upbringing has impacted all facets of his life, including the strain on his marriage and his excellence as a spy. He goes further into cultural turmoil when he is assigned to spy on a Korean-American politician who during his run for mayor of NYC has to deal with tensions between Blacks and Koreans.

Shortcomings by Adrian Tomine - graphic novel whose protagonist Ben Tanaka is in a struggle with his own identity. His girlfriend is politically active and is involved in the Asian-American community, which he doesn't care much about. Ben denies the relevance of race, yet he has a certain attraction towards white girls and complex about his own attractiveness as an Asian male. Ben is bitter and angry, and his rejection of many things, including his own race distances him from people.

I also liked American Son (story of two Filipino brothers and their mother navigating violence and a new culture in America) by Brian Ascalon Roley and The Dead Do Not Improve by Jay Caspain Kang. The latter is Kang's first novel and it was not spectacular, but I did like his writing style and his use of pop culture from the view of a Korean American. He incorporates the story of the shooter Seung-Hui Cho, which he originally wanted to write a book about to reflect on Korean American male anger. Jay Caspian Kang is already in the media for his journalism pieces, but I'm looking forward to more of his writings and possible continued foray into literature.

I love that graphic novel!

I see, I haven't really read any actual books on the subject of being hapa/asian in the US. But I remember vividly during middle school, I stumbled upon this comic book in the library. It is surprising mature for a children's book and deals with identity, self-hate, racism, bullying, emasculation of Asian men, which I think hapa males can relate as well.

This book summarizes all asian stereotypes. sad thing is, it was written by a Asian-American man. https://www.amazon.com/American-Born-Chinese-Gene-Luen/dp/0312384483

seriously, just look at a random page in the book and TELL me you dont see what im coming from.