We found 7 Reddit comments about Bayou Classic 800-408 - 8-Gal Premium Brew Kettle, 6-Pc Set. Here are the top ones, ranked by their Reddit score. 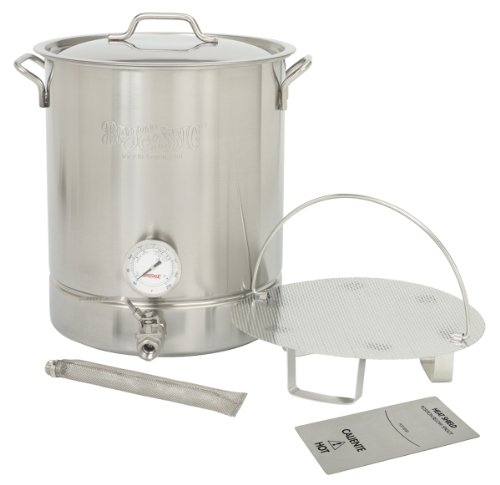 For $20 more you can get the triclad bottom version w/ a false bottom, thermonmeter, and screen.

Currently an extract brewer here, but I bought this kettle awhile back hoping to move to all-grain. Can I mash in this? Also, would I leave the propane burner on while mashing to maintain a constant temp? Would my best bet be just to get a cooler setup like I see in most post and just use this for the boil stage?

This is the one I bought a few months ago. It works great http://www.amazon.com/gp/aw/d/B008EMD6C0. I'm not doing full grain yet so this is more than sufficient for my current needs. When I expand it will be a nice part of a larger setup too. Might want to go larger if you can afford it. Get the built in thermometer. It's a life saver

I have a Bayou Classic 8 gallon rig. I have been very pleased with it, came with valves, themometer, and false bottom, couldn't be happier for under $200.

Does anyone have any good suggestions for a good kettle for a beginner? I have my eye on this one

I'm not sure what you mean by that. Whats a weldless thermowell?

I'm using this kettle with their thermometer.

So let's talk physics and thermo dynamics... So the question is, will a smaller diameter brewkettle help keep the boil going? Will moving down to an 8gal kettle (which is the same size as the burner) solve the problem?

I started with a 5gal brew pot. Seems to work ok, but I still have concerns about topping off the wort with fresh out of the tap water to bring it to 5gals... I really want to do full 5gal boils.

After doing a bunch of reading here and homebrewtalk, I decided to skip the 8gal brew kettle and go right for the 10gal.

We're still brewing on the stove, it's a glass electric burner. Even on high, we needed the lid on to get the wort boiling. Once we'd take the lid off to stir it would lose the boil. (I have no idea what effect this would have on the beer... ^[1])