Reddit reviews Being Mortal Illness, Medicine and What Matters in the End

We found 8 Reddit comments about Being Mortal Illness, Medicine and What Matters in the End. Here are the top ones, ranked by their Reddit score. 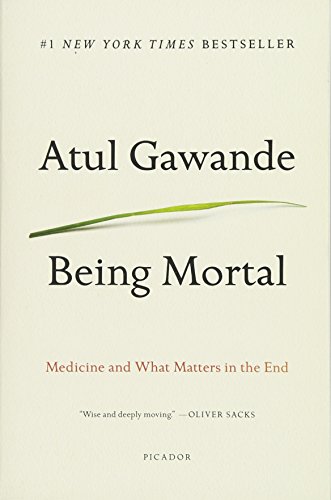 8 Reddit comments about Being Mortal Illness, Medicine and What Matters in the End:

Ars Moriendi, the art of dying, I feel, is often a lost concept in modern society.

Dying with dignity is an oft shunned topic of discussion, but when approached with a level headed understanding, can save tons of suffering for the dying, and even more than that, can save a lot of depression associated with people caring for the dying and their regrets about not making decisions that comforted the dying in their final days, weeks, months, or years.

It's a hard conversation for even doctors to have in industrialized nations, because the expectation is that everyone is just one medical miracle away from recovering some life they used to have, but the reality, in many cases, is that way of life may already be gone.

Expecting that way of life to come back and crazy interventions that may make the patient worse are something people often pursue towards the end, instead of accepting what they are facing, and living out the best life they can while they still have time.

If you are still reading this here, I would highly recommend the book Being Mortal by Atul Gawande as it has given me an unparalleled understanding of the expectations of aging, mortality, and dying, that I could never express as eloquently

When you're done with those, may I recommend Being Mortal

Are you caring for your aging parents at your age?

I recently read the book "Being Mortal", and I highly recommend it. It's a look at the very flawed way in which we view dying, medical care, and other end of life concerns. It was a very good read.

I completely agree. There are two topics the whole:
&gt;The most important part is not a conviction but staying alive.

thing reminds me of.

1 - Daniel Khaneman in his book Thinking, Fast and Slow discusses the differences between the experiencing self and the remembering self. Briefly, the way we experience an event is very (very) disconnected from the way we remember and event.

Prioritizing survival of rape suggests that the memory of rape is less painful than the experience of rape itself. Arguments to the contrary get into territory of suicide, which is just as hard to discuss as the topic of rape.

2 - Atul Gawande in his book Being Mortal talks a lot about people diagnosed with terminal illness. For some, the focus of their lives becomes less about survival and more about controlling the narrative of their story, and how they're remembered.

At the point of diagnosis, many people will opt for painful chemo/radiation even for an extremely slim chance of a few extra years/months. Others disregard treatment and focus on controlling the parts of their lives they value the most - friends, family, unfinished projects. The latter group understands they're possibly shortening their lives, but choose to do so in order to retain control of their life story.

You're 100% right. I have no real idea what I'd actually do in the situations this thread talks about. I know what I hope I'd do.

&gt;Let's hope none of us ever find out!!

Everybody should read Atul Gawande's Being Mortal.