We found 7 Reddit comments about Boba Wrap Baby Carrier, Grey - Original Stretchy Infant Sling, Perfect for Newborn Babies and Children up to 35 lbs. Here are the top ones, ranked by their Reddit score. 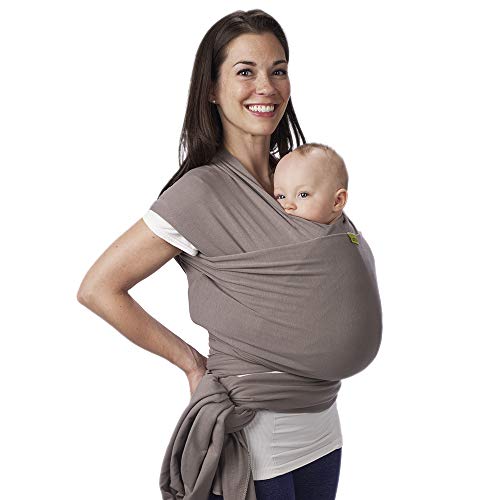 Simple, no-guess tying instructions and just one size make this wrap your GO-TO BABY CARRIER for the first three months of parenthood <3 It was the first of its kind and the simplicity of the idea has kept moms and babies together for 10 years.Stretchy and SOFT, machine washable fabric that will keep your baby close. So much easier to clean than a stroller or carseat! You can machine wash and dry this wrap, making life just a little easier for new moms.ERGONOMIC seat for baby, ergonomic weight distribution for mom and dad! Each time you tie the wrap, you create a CUSTOM seat for your baby. Knee to knee support every time!EASY to tie and easy to breastfeed in. It even acts as a privacy shield for nursing moms because you can nurse while wearing it, without taking your baby out of the wrap.Bond with your little one while getting back into the swing of things: you'll be able to tie this once and then wear it out and about. 95% Cotton, the Spandex in our wrap allows it to retain its shape and not loosen or sag as you re-adjust to nurse or take baby out to go for a ride in the car. Just like your favorite yoga pants, the wrap stretches and supports you and your baby.
Check price on Amazon

Cloth diapers - flour sack towelsfrom amazon as the stuffers - cheap and clean easily. Bamboo liners for the poop. Rubber gloves for swishing it in the toilet for the parts that don't come off with the liners. Lot's of covers that can be used from newborn to 35 lbs. You can use any bum cream if you use the flour sack towels as well FYI because it doesn't ruin them. Also pick up a couple of these laundry bags. Wipes.

Cleaning is easy - "quick wash" with a bit of soap, then a hot long wash for extra soiled diapers.

Baby nest was nice to have but not a necessity. Blankets/towels can help. Also a wrap is nice for the first 6 months but not necessary.

A pump, even hand pump will be handy. Especially in the first few weeks she's regulating her supply.

One thing I know that I wish I had at the beginning is a Boba Baby wrap. That thing is amazing! My daughter loved to be held, but its hard to get stuff done with no free arms. This thing worked great and would she slept great in it.

I have used the moby and ergo. I love the moby for when they are still very little (like the first 4 months). I wouldn't say it's easy though, there is a learning curve with the scarf and there were a lot of things I didn't like about it. Because it wasn't so easy to put on and off many times I ended up wearing her for longer than I wanted to because I didn't want to deal with taking her in and out (like when I went to the bathroom). No one else was able to really carry her, I put it on my husband a few times but it's not an easy thing. I don't know if I just never got that good at it, but it take a few minutes to put on and because it's super long if you are out some where pieces of it are on the floor while putting it together. However, once it was on I loved it. I was able to nurse very easily in it, baby felt super secure and snug, and it was really comfortable.

The ergo, you need to use the insert for the first 2-3 months. I found the insert to be a bit annoying, but it was easy to take on and off. I've heard instead of the insert you can use a receiving blanket as well. My son is 12 months old and we still use it. it's just two clicks so it's simple to put on and off (even my bachelor brother put it on with no issues), baby has a nice M position with it's leg, and I like the cover it has for when you're nursing or baby is sleeping. I found it hard to nurse with the ergo, but from watching a lot of Youtube videos about it I found there could be a big learning curve to it. I am not a regular baby wearer, so maybe I just never did it enough to get very good at it. I was able to do it, it just wasn't as easy as the Moby. Now that my son is older he likes to be worn on the back which is fun. I haven't figured out how to get baby to be worn on the back by myself though. I don't know if baby has to be older, but for us it's a 2 person job.

I got a couple I know one of these baby wrap slings and both mom and dad loved it. Dad really liked it because he is a gamer and could just strap the kid on and chill on the couch. Much better than one of those ones with the straps and buckles that look like a baby backpack.

Start wearing your child in it and get him to learn to relax that way. My wife wore my son almost the entire flight outside of eating and he was happy as could be.