We found 14 Reddit comments about Born Fighting: How the Scots-Irish Shaped America. Here are the top ones, ranked by their Reddit score. 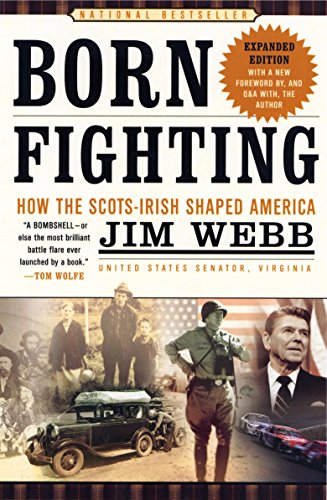 14 Reddit comments about Born Fighting: How the Scots-Irish Shaped America:

Edit: I found the original article that this map comes from, and it explains everything I was trying to say below much better than I ever could. It's well worth a read!

&gt; But the closer to the equator you get, the more religious people are and that consequently probably affects politics.

What? My 'oversimplification' meter just broke. (Edit: I retract this statement. I accused u/3ii3 of oversimplifying and then I oversimplified in the next sentence. Doh. See u/Ruire's far more informed view on the matter below.) You can't really divide America (or the world) into cultural regions based on temperature.

I think you are correct that geography has a greater influence on modern American regionalism than do the British roots of Americans. I mean, how many Americans can actually name a specific region in Britain that they can trace their ancestry back to? However, it's not entirely accurate to say that 'most Americans are of German descent.' British-Americans still represent the largest group of white Americans, they've just been here so long that they no longer identify as British. From Wikipedia:

&gt; In the 2000 census, self-identified German Americans made up 17.1% of the U.S. population, followed by Irish Americans at 12%, as reported in the 2000 U.S. Census. This makes German and Irish the largest and second-largest self-reported ancestry groups in the United States. Both groups had high rates of immigration to the U.S. beginning in the mid-19th century, triggered by the Great Famine in Ireland and the failed 1848 Revolution in Germany. However, English-Americans and British-Americans are still considered the largest ethnic group due to a serious under count following the 2000 census whereby many English and British Americans self-identified under the new category entry 'American' considering themselves 'indigenous' because their families had resided in the US for so long or, if of mixed European ancestry, identified with a more recent and differentiated ethnic group.

Going back to the relevance of British roots in early America, I'm currently reading Born Fighting: How the Scots-Irish Shaped America by Jim Webb, and it's really fascinating how a lot of animosity toward the English carried over to America when the Scots-Irish were banished to the mountains and to poverty by the English planter aristocracy. He makes a really fascinating-to-think-about point that the American Revolution and Civil War were kind of an echo of the Wars of Scottish Independence and the English Civil War, with wild, Celtic mountain-men going to war against a more settled Anglo-Saxon civilization trying to drag them kicking and screaming into the global order.

So next time you see a Southerner (who is likely of Scots-Irish descent) waving a rebel flag (which is not coincidentally based on the Scottish St. Andrew's Cross flag) and cursing damn Yankees (of English and continental European descent), even though they are probably not aware of it, they are resurrecting old animosities that date back to the medieval British Isles.

. . . . says the author of Born Fighting: How the Scots-Irish Shaped America.

&gt;Their cultural identity reflected acute individualism, dislike of aristocracy and a military tradition, and, over time, the Scots-Irish defined the attitudes and values of the military, of working class America, and even of the peculiarly populist form of American democracy itself.

Jim Webb's Born Fighting is a great read on this

He wrote a book on the very people in these areas, and is one too

Oh, and read this article

Slightly off topic: If anyone is interested in learning about some of the history of the American psyche, I highly highly recommend the book "Born Fightin'" by Jim Webb. He traces the immigration and influence of the Ulster-Scots (known here as Scots-Irish) in the US, and the ways that they have influenced, and continue to influence America, from militarism to suspicion of outsiders and government to country-western music to feuds in Appalacia.

What you are talking about is people asserting an Anglo cultural norm as the Norm and then faulting black people or whomever for "falling short".

"This is part of their culture."

Interestingly this is a feature of the specific cultures in West Africa that are ancestral to African Americans, specifically in the Yoruba language area. Hausa and other northerners remark on this and it is something of a stereotype. As it happens it's also a stereotype of Germans in Europe, one that Germans are aware of and are a little sensitive about.

Class and ethnicity are linked in America - obviously WRT to African Americans but it also true for Scotch Irish and others. James Webb has a really good discussion of how Scotch Irish culture has become emblematic of blue collar people in general: http://www.amazon.com/Born-Fighting-Scots-Irish-Shaped-America/dp/0767916891

It's How the Scots Invented the Modern World. Similar titles include How the Irish Saved Civilization, How the Catholic Church Built Western Civilization, and Born Fighting: How the Scots-Irish Shaped America. None of them are by the same author, but they're all interesting historical books with similar titles (How some great culture did great things that built what we have now), none the less.

I would love to find similar titles about other countries, cultures, and civilizations. They're always so interesting!

I've become a fan of Webb since I moved to Virginia, so I decided to read his book. Really enjoyed it too.

Also liked Just a Geek by wil, even though I'm not a Trek fan at all.

Country club does reference federal minimum security prisons -- however the "ultimate" ones tend to be like, in Connecticut-type WASPy places. (My dad enjoyed one.)
California has significant mestizo and even some Scots-Irish, that place is huuuuuuge and diverse.

New York has significant Scots-Irish, Russian, Irish and Italian populations, and I bet the max security in Russia is less nice than "Little Siberia" in NY.

This tracks the true scope of the Scots-Irish diaspora (many who just put down 'American' or 'English' on the Census: http://www.theatlantic.com/politics/archive/2009/10/the-scots-irish-vote/27853/

Here is a book on the feisty feists: https://www.amazon.com/Born-Fighting-Scots-Irish-Shaped-America/dp/0767916891

Maybe, but it's not only outsiders who say these things. I've read a number of books written by Scotch-Irish authors from Appalachia said the same thing. This was one of them, written by Jim Webb, the former Senator who ran against Hillary last year. https://www.amazon.com/Born-Fighting-Scots-Irish-Shaped-America/dp/0767916891

All y'all Scots Irish ain't neither. You're probably border English that Cromwell sent over to displace the true Irish.

This might be me though, we'll see what my 23 and Me says

Edit: But if you are, embrace your heritage. Jim Webb wrote a tremendous book on the Scots Irish

Well, you are kinda right.

Large portions of the South, the Appalachians and the Midwest were populated heavily by Scots-Irish settlers... And this heavily overlaps with those working class rural white populations in the US that are typically called Rednecks.

Former Senator Jim Webb wrote a great book about it.

Gun, Germs and Steel. That is what Jared Diamond says, that is why they won.

But then there is also the James Webb thesis: Born Fighting. While Webb is writing about the Scots-Irish in America I think some of his conclusions can be extended to all of Europe. North Europe held one of the last people to have a warrior culture, one of the last places to be civilized. Perhaps they (and we) carry the seeds of that in their genes, making them more willing to fight than most other cultures that have a longer history of civilization.