Reddit reviews But What If We're Wrong?: Thinking About the Present As If It Were the Past

We found 10 Reddit comments about But What If We're Wrong?: Thinking About the Present As If It Were the Past. Here are the top ones, ranked by their Reddit score. 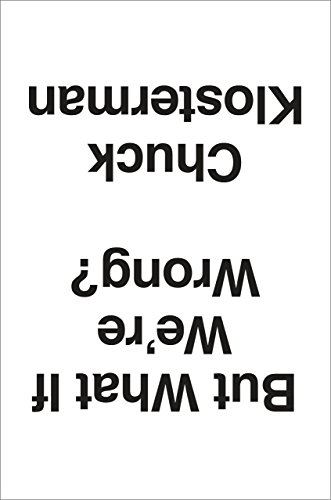 10 Reddit comments about But What If We're Wrong?: Thinking About the Present As If It Were the Past:

The latest Chuck Klosterman book deals with this a bit near the beginning.

Currently enjoying But What If We're Wrong?

But What If We're Wrong?: Thinking About the Present As If It Were the Past by Chuck Klosterman

I know you were just proposing an example, but I just want to say that the earth is in fact round and we do orbit around the sun. We have sent so many people into orbit, and so many probes into space that give you such a clear view of the earths shape that I personally can't take the idea that the earth is anything but round. I would also urge someone who believes the earth to be in another shape that isn't round to take some time and look at the science of satellites, GPS, and time keeping. They all run on precise measurements based on the earths round shape. If the earth wasn't round, these systems just wouldn't work.

A simple way to prove yourself of this, is to tie a gopro to a weather balloon and launch it. In the footage of the gopro, you will see the curvature of the earth. Now, I digress...

&gt; Does it make me crazy in "your" opinion that I believe it is "possible" that there is a great conspiracy concerning the truth of mankind that we are taught versus what is reality?

It really depends on what you believe and the basis of that belief, along with how quickly you're throwing away the basis of our current understanding of what our reality is. If you're basing your theory one some headline you saw in a tabloid or a small article buried deep in the web, I am going to consider you crazy until you can present to me a lot of facts on why you believe.

I really don't think that providing facts is too much to ask.

&gt; Why do some people think it is insane to question the "facts" that are fed to us?

I highly believe its our education system and how we teach people along with how the scientific community works. We essentially teach people that once you graduate college you know everything, or at least that what people think, that these are the facts. They are taught this is the world, there is where we are, and now go add to it. So people come out with a sense of entitlement when it comes to their knowledge and education. People are rarely ever taught to think for themselves, but rather that the answer is in the back of the book.

I think there is a good number of scientist out there who do question everything. But the problem they find themselves trying to balance is their own credibility while trying explore new findings. So much of what the science community does is based on things they already view as fact. If you introduce a new theory that disrupts all of that, you best have a pretty solid basis to do so. Otherwise you will find yourself discredited and it will make it harder to find funding. On the other side of that you also have scientist who have worked their whole life on a particular subject matter. So when someone comes along and says, "well, what about this?" there can be a lot of push back. Some people just don't want to loose their authority, or loose their life's work from someone who is on the outside.

If you propose questioning science in a public forum to a scientist, they are going to tell you that the science is sound due to peer review and the scientific method based on multiple experiments. That really is the key, multiple experiments that have been peer reviewed. So it can be pretty understandable when someone comes from the outside and says "well, what about this?" that it is immediately met with skepticism. I think you would be pretty hard pressed to find a scientist who doesn't question something. Its what they do for a living. If they don't question it, and scrutinize it, they are probably not a great scientist.

I might suggest to you a great book called But What If We're Wrong? by Chuck Klosterman. In it I think you will find a pretty deep book that examines our current understanding of the universe and questions what would happen if there was found a fundamental aspect to knowledge, that if discovered, would cause us to rewrite everything we currently know.

But What If We're Wrong

Coincidentally, Chuck Klosterman just released a new book like 2 days ago - But What If We're Wrong? So that's an option.

In that vein, I also really enjoyed Gene Weingarten's The Fiddler in the Subway, which is a collection of his features and columns for the Washington Post. The headline story is about a stunt where they get a world class violinist to play in a DC Metro station to see if anyone will notice, but the other stories are quite good as well.

A book that sounds relevant to your class that might interest you (full disclosure: haven't read it yet) is Chuck Klosterman's But What If We're Wrong?: Thinking About the Present As If It Were the Past.