We found 3 Reddit comments about Captive State: The Corporate Takeover of Britain. Here are the top ones, ranked by their Reddit score. 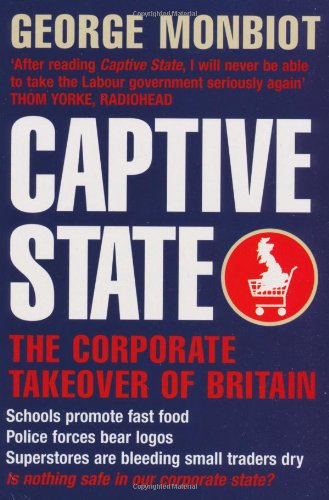 3 Reddit comments about Captive State: The Corporate Takeover of Britain:

Captive State: The Corporate Takeover of Britain by George Monbiot [2001]

&gt; The Dome, the lottery, the Scottish Parliament, the Manchester tram scam, the destruction of the railways and London Underground: these are all scandals we know about and which make us think the lunatics are running the asylum. We feel bewildered disempowered, ripped off and plain scared for the future of our country and the world.

&gt; None of these episodes is covered in this book. Yet through its coverage of the Skye Bridge, the Coventry hospitals, the “regeneration” of Southampton, genetic engineering in agriculture and medicine, the takeover of our universities - and much, much more it explains everything about the decline in quality of life, accelerating gap between rich and poor, and the total destruction of anything remotely resembling “democracy” which is going on all around us while we sit there swigging Special Brew and watching reality tv.

&gt; If Monbiot never wrote another thing he would have entirely justified his existence with this book which is quite simply THE most important book on politics in Britain this century. In reading it you realise that you are not mad after all and neither are “they”!

I wouldn't say the expenses scandal was particularly bad - it was mostly pathetic petty theft in the grand scheme of things. The real cronyism and corruption is the links between government and business - whether that's through behind the scenes lobbying or the rather more open use of advisers (or even ministers) who have come straight out of companies with massive vested interests in the policies that they are advising on.

George Monbiot's book Captive State talks about how pervasive this was under Labour, and it's far from improving under the current crowd.