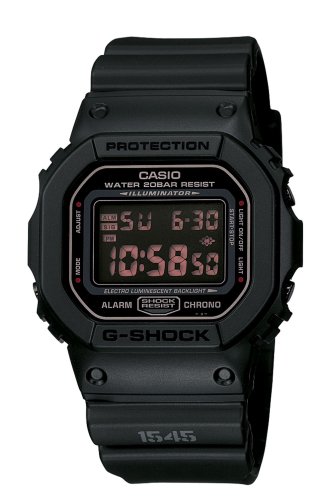 This is an old school DW5600MS-1CR Military concept, much like the first G-Shocks Casio made that I decided to configure into the perfect military styled watch for myself from aftermarket parts bought from Jays and Kays on ebay after watching a great video on youtube from watch nut channel The Urban Gentry. (If you're reading this, thanks!)

I initially had some concerns about the visibility under low light conditions, but really it hasn't been any issue whatsoever. I'm sat in a dark room right now and can read it clearly just from the glow of the monitor.

In hindsight, the 5 ring Zulu was unnecessary and the extra bulk the double looping causes always gives me issues, and the way the adaptors the strap threads through work make the entire purpose for a 5 ring pretty much redundant. So if you do this, mind you get a 3 ring with PVD fittings to match the bullbars. Again, Jays and Kays has this and their service and quality are just fantastic. I'm really pleased with how it all came together.

Here's everything if you fancy doing something similar.

The video that turned me onto the idea: https://www.youtube.com/watch?v=yaZ5frKL9Iw

The bullbars, adaptors and strap: http://stores.ebay.com/JaysAndKays

Muted, as in the LCD display is more blackout:

G-Shock 100%. There are a couple military ones with blacked out reverse dials, however they can be more difficult to see in certain light conditions than the normal dials. Here are a few models that military personnel use and some others:

DW6900-1V: This one is similar to a very popular G-shock used by a lot of US military, the DW-6600. I don't think they make it anymore though, but this is pretty close.

GD350-1B: This one has a yellowish tint to the digits so it's one of the easier reverse dials to read.

DW5600MS-1CR: For this one there is a really cool mod you can do for about $35 more to make it look really tactial and military.

G-shock are pretty time tested as far as extreme environments go. I would put down a little extra money over the Timex just to make sure that my watch doesn't break in Siberia.

Any G-Shock, I used this one.

Makes sense. You should still take a look at some of the G-shocks out there too since there are so many that fit your requirement. You might be a fan of these since they look so similar (square instead of round G-Shock) and are both Casio. They've got some big improvements (features and water resistance) for just a bit more $.

I recommend the Suunto Core. I have the all black/negative display version and it is awesome. Like ebbies7 said, you can get a regular display version for ~$150. Also, the Marathon Navigator is a nice black analog with tritium dials. I wear the Core, Navigator and the two below all the time when casual and not wearing a dress watch.

I've used a G-Shock Military for the past 3 and half years. link


It's been through desert exercises, wet RHIB rides, oil and fuel splashes, and gets banged up every day on a metal ship. I replaced the batteries a few months ago, and it's still working great. I only wish that it had multiple time zones and multiple alarms.

If you want to get your kid a watch, like, you're dead set on getting him a timepiece, feel free to get him some sort of moto bullshit. Just make sure you purchase something nice quality, obscure, and preferably give him the receipt with it. Also, I'd suggest making this more of a 'dress up' time piece and not an every day carry sort of watch, that way your son doesn't feel obligated to wear it other then when he's around family if it doesn't want to.

Regarding tacti-cool time pieces, I'd wait as well. It's a marvel that most Marines can even tell time, and you want to get him a pricey ABC watch (altitude, barometer, compass) that he'll either break or never use properly? Nothing cooler than a data Marine or a mechanic that can tell you which direction north is from the motor pool.

If it was me, I'd go to his graduation if it was feasible (dress the women-folk down, the DIs have been breaking their leashes lately), and just be supportive. I'm not sure what kind of kid you have, your relationship with him, or his maturity level, but trust me when I say he's going to need your help in the future.

Also, if you want to wear a watch with an EGA on it as a sign of support, then go for it man!

For the majority of "military" applications, a blacked out Timex or Casio with glow-light function will serve him overwhelmingly the majority of the time. Ensure it's digital, with a seconds readout, and easily replaceable because Marines are dumb, and equipment breaks all of the time.

though, the price is because of the rarity, i believe.

The Rangeman is really nice but it's also very large and thick so it can interfere a lot with daily tasks. Slimmer profile watches are better for not getting in the way. I would check out the 5600 or 6900 series watches:

i got one of these from amazon

I'm sure some will laugh at this suggestion, since this is recommended by someone no matter the question, but have you looked at the [SKX007] (https://www.amazon.com/Seiko-SKX007K-Divers-Automatic-Watch/dp/B000B5MI3Q)?

I don't know anything about [these guys] (https://www.artificehoroworks.com/shop/stealth/), but they advertise a "stealth SXK007" that's admittedly out of your price range (but well below the Nomos).

Another out of the box minimalist option: [Casio black-on-black G-Shock] (https://www.amazon.com/Casio-DW5600MS-1CR-G-Force-Military-Concept/dp/B001QFYDEC/). You're unlikely to find a more rugged waterproof watch.