We found 1 Reddit comments about Computer Forensics For Dummies. Here are the top ones, ranked by their Reddit score. 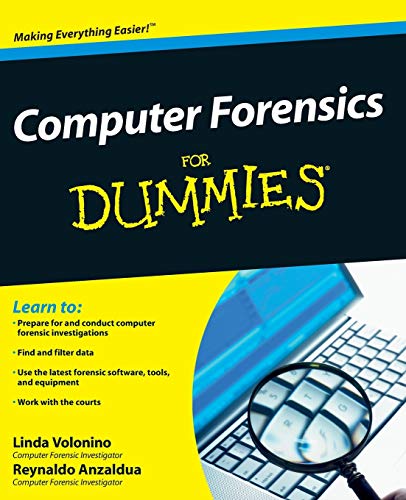 For Dummies
Check price on Amazon

First off, I never said any of the things you're arguing against. You need to learn how to read posts.

&gt;Then you talk about untraceable data steals. If you get any data from it and want it back it's traceable, this includes your "untraceable" attacks.

this is untrue. Tracing is determining information about an attack or attacker in a postmortem, after the attack is complete. If you go to www.bonkofomerica.com and get phished, that's not traceable unless the bonk of omerica site is still up, and even then it requires significant work. If there's a keylogger agent on your machine, on the other hand, it's possible and even easy to determine what it's sending and where. Even if the information is being collected by zombies, that information can be used to shut at least some of those zombies down, or better yet determine the Leader of the botnet and shut that down.

I'm not saying "unrelated things" to try and "win". I don't care if I "win" an argument on the Internet. But you're spreading disinformation, and that's not okay. Seriously, I recommend getting yourself a copy of this book as a decent primer to Computer Forensics, in spite of the bad reputation that the Dummies series has it actually covers the conceptual bases pretty well. As far as knowing about the state of modern antivirus products, read industry stuff. Tech Republic is okay, Microsoft blogs are usually pretty good (though clearly biased), really I think even the New York Times had an article last year about the ineffectiveness of antivirus in the modern world.

Seriously, though, you're not going to make any headway in this discussion by pretending that AV products are good and useful, or even meaningfully different. It's seriously a closed case, an ended discussion. third-party antivirus is dead. You'd do tens of thousands of times better with a modern adblocker than a modern AV.