Reddit reviews Consciousness Beyond Life: The Science of the Near-Death Experience

We found 5 Reddit comments about Consciousness Beyond Life: The Science of the Near-Death Experience. Here are the top ones, ranked by their Reddit score. 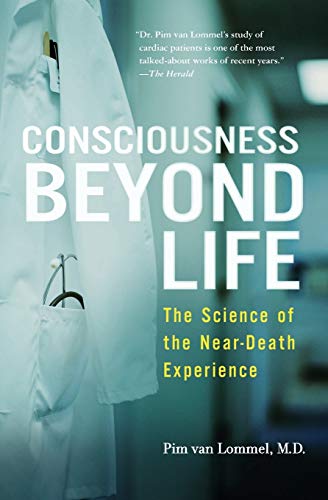 Consciousness Beyond Life: The Science of the Near-Death Experience
Check price on Amazon

5 Reddit comments about Consciousness Beyond Life: The Science of the Near-Death Experience:

Read Pim van Lommel's "Consciousness Beyond Life" It's a fascinating book, and arguably the most credible of a topic where there's not a lot of credibility to go around. He tries to refute the kinds of arguments made in articles like the one referenced here.

To be fair, his book and approach is an example of a very intelligent MD trying to do original research, and thus has limits, and he speculates in ways that few PhDs would, but on the other hand, I don't think a reasonable person can dismiss the book out of hand or disregard many of the experiences he includes.

The unnerving thing for me is that as I have mentioned the book to others, I started getting stories back of people who had NDEs.

Not sure how religious you are.
I'm pretty science oriented and quite sceptic about religious themes. However, I came across this book, talking about Near Death Experiences from a very scientific standpoint. The author is(was?) a renowned cardiologist and decided to research in this field after many unexplainable incidents during heart-surgeries.

After reading the book, I'm actually quite convinced that there is something that transcends humanity.

Maybe that helps you - I wish you all the best

Reading. Not just about first hand accounts, but also about scientific-method based studies that have been done. There's also a fair amount of decent research out there on the paranormal. I love reading books that propose theories for the existence of paranormal events, such as potential relationships between quantum physics and consciousness.

Examples of the kind of books I mean:


The ESP Enigma: The Scientific Case for Psychic Phenomena


Consciousness Beyond Life: The Science of the Near-Death Experience


I wouldn't necessarily say I believe in demons/angels/spirits the way they are explained by most believers, but I know that some of these experiences must be legitimate. I am open to the fact that they may have some sort of non-spiritual or non-religious explanation, but I believe in them because it is too improbable for me that across the world, in nearly every culture, the concept of ghosts exist. That, and in nearly every culture, across all religions, near death experiences share great similarities - black welcoming tunnel with light at the end, being welcomed by someone friendly, experiencing great joy, having a life review where they are not judged, etc. It can't be coincidence that people from vastly different religions, including atheists, share this story. Some studies have supported the notion that these experiences are NOT due to the biological reasons one would guess. (neurotransmitter release, apoxia, etc)


I wish that people would keep more of an open mind to it, instead of just immediately saying "this stuff can't be true because it's not yet supported by science."


Every single current theory we have was at one point, not supported by science, or even ridiculed. If we all had such a closed minded, and frankly, ignorant perspective, we'd still go around believing in the plum pudding model of the atom, or that the world is flat, or that Higgs couldn't possibly be right about the Higgs Boson theory. Why people can be such closed minded science fanatics when the foundation of science relies on open-mindedness to new theories is embarrassing.


I have also had personal experience in the form of first hand accounts from people who wouldn't make it up (mother, close friends).

I'll just provide the resources that I used to learn about this. I'm no expert by any means, I've just starting delving into this topic so I'm just presenting what I've learned so far as you or OP expressed an interest in wanting to believe otherwise.

When you are surveying and cataloguing hundreds and hundreds of stories, it really helps to read a good sample ofthem. A lot of people just dismiss their findings as "arbitrary, anecdotal" and unscientific. If you actually read through them all, you understand the findings much better.

This article hits on some of it (https://www.liveabout.com/common-elements-near-death-experiences-2594675) but it's only based on the Atwater study. It doesn't get into the certainty that experiencers have that what they saw was "nothing like a dream" and is"more real than reality" (paraphrase).