Reddit reviews Cults in Our Midst: The Continuing Fight Against Their Hidden Menace

We found 4 Reddit comments about Cults in Our Midst: The Continuing Fight Against Their Hidden Menace. Here are the top ones, ranked by their Reddit score. 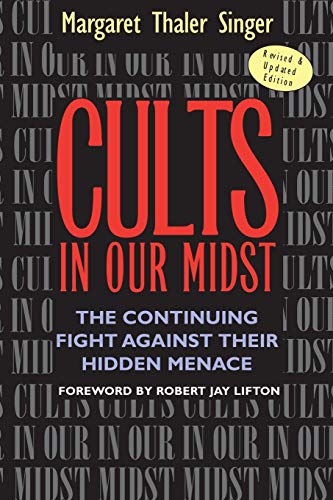 4 Reddit comments about Cults in Our Midst: The Continuing Fight Against Their Hidden Menace:

Brainwashing uses various techniques including making the target get a low self esteem, mixed messages, information control, and an us-vs-them mentality. There are several books on the subject. Some of the most important is "Cults in our midst" by Margaret Thaler Singer, and "Combatting cult mind control" by Steve Hassan..

Not all cults work exactly the same way, but they have similar characteristics. Perhaps the best way to put it is that a person in a cult is similar to a person in an abusive and manipulative relationship. Doubt is interpreted as treason, obedience is seen as love. Little by little, the cult draws you in, moves you away from your loved ones, requires you to ask for permission about every single thing you do with your life. Fear is abused, and imaginary enemies are planted in your mind (the CIA, aliens, the Illuminati, the devil, bad spirits, whatever), and the cult is seen as your only salvation from these dangers. More aggressive cults assign you an "elder" partner to watch "over" you, to keep you under control. It's like getting swallowed by a giant snake: The fangs prevent you from getting out, and draw you in, until escape becomes physically impossible. Expect harsh punishments for trying to escape, often voted in favor by the flock. That's how loyalty is manufactured.

And the more you obey, the more you give away the means for escaping: You give them your money, your time (even your sleep time), your goods, they become your managers, and so on. Most cults also plan your activities to reinforce their morals and to stop you from thinking to much.

Eventually, the morals of the cult become universal, and you'll lie, cheat and commit illegal acts in the name of the cult, or the cult's deity, without realizing that you've become the deceiver, and that had you known all you know now, you wouldn't have joined in the first place.

Suggestion for both you and u/AckligJDub...

Learn everything you can about the REAL origins of the bible.

Once you've learned that, your entire world-view will shift, and if you're suffering from fears of "Armageddon" that knowledge I've suggested will totally wipe out those fears.

What I'm going to post is just the tip of the iceberg when it comes to modern-day knowledge about the origins of the bible:

Also a few videos on the characteristics of cults:

&gt; Maybe someone needs a book but really most people dont " need" a book about Jehovas witneses ( maybe 100 Best Door Slaming Techniques) See what I mean

I DO see what you mean, and I agree completely! I mean, I've got this library of SGI books and out-of-print books about the SGI, and there's only ONE that I've found anyone to have any independent interest in - Hirotatsu Fujiwara's "I Denounce Soka Gakkai" - and that was simply whether I thought it was the authors siggy inside the front cover! I'll pull out a few paragraphs from these, maybe, but I certainly don't expect anyone else to go to the investment of time and energy to read the damn things!

Reading entire books is the stuff of college courses and grad school, not an anti-cult activism/cult escapee support site!

&gt;the question what is sgi is misleading any way as sure the cult itself love to have a neat little introductory book So dont give the culties ideas

They've already got that O_O

OMG! YAAAS!! Or at least some scenes reminiscent of "Weekend at Bernie's"! I think I could actually do that - I'll need to brush up on my Photoshop skillz. Stay tuned - probably not today, but perhaps this week.

&gt;I am kind of thinking getting a UK British ex sgi facebook page or something I would like to meet other ex sgi and exchange thoughts / support other people escaping

Well, over here, there's a "Meetup" site where you can advertise for people to get together, and they contact you through that site and confirm so you can get it all set up - that's a pretty easy way to do it, I suppose. wisetaiten back in the day tried, but there was only one person who responded and wasn't close enough, so she didn't try again. Facebook's a good resource, though - why not? And I don't think there's any worry about copyright or anything - don't worry, they'll let you know if there is, but there's plenty of SGI stuff on Facebook. wisetaiten even set up an SGIWhistleblowers Facebook page, but I can't get into it now...

&gt;You do that Brilliantly here on whistle blowers

&gt;I do also think some Drs mental health psychologist are needed for some explanations for some people .

"Religious trauma syndrome" is a pretty new definition; I believe the field of psychology is still in catching-up mode as far as cult damage goes. I don't know of any book about cult effects from the medical perspective; for now, Steve Hassan's "Combatting Cult Mind Control" (updated 2015) remains the gold standard; I'd follow that up with Margaret Thaler Singer's "Cults in Our Midst: The Continuing Fight Against Their Hidden Menace" - while I have not read either of these (prolly should, yo), I've used excerpts from them that I've found online and I believe wisetaiten read the Steve Hassan book and posted here about it. The Thaler Singer book is from 2003 and while it includes some cult specifics (Aum, Moonies, among others) it doesn't seem to identify SGI specifically - the Ikeda cult is just that irrelevant. That's another reason that writing such a book is an unappealing prospect - there just isn't much demand for it outside of this little group. Look at our subscriptions - thus far, we're less than 900. There are pages on reddit with millions of subscribers! THEY should write books!

It certainly is. I know people are often flippant, even silly, around here, but I hope we demonstrate how seriously we take the effects and communicate that appropriately to our visitors.

&gt;like you cant actualy be real unless you go over to hall 1 and bang out load of chanting for 30 minutes before you start activity

Gotta get you in that compliant, gullible, obedient, cooperative trance state first!

&gt;spend 10-20-30 years beliving that stuff and then find out its all a crock of shit if that dont mess ya mind up what will ?

I know. Some say we should just forget all about it, leave it behind like used toilet paper and not give it any more thought than that wad of used toilet paper, but people's minds don't work that way. Of course our SGI critics want us to shut up and they try everything, like shaming us for "focusing on what's in the past, maaaan".

And THERE ya have it, folks!

The downhill process was a slow decline that happened the longer she was involved with them (it's been more than 8 yrs now I think). The last I talked to her, she was using one of their life coaches and was coaching people herself. She's also involved with another GT member so she's in it to win it, so to speak. I learned from Singer's book that telling someone they're in a cult will just drive them further into it, so I didn't express my concerns to her. I tried pointing out some inconsistencies in GT's teachings, but that made her hostile so I stopped. I cut off contact with her a few years back, I don't know how she's doing now.

I'm sorry to hear about your mom, I know how frustrating it can be. I wish I had more answers, I'd just suggest keep reading good-quality sources on cults and get as much info as you can. Also, if you have someone to talk to about it (like a counselor) that can make it easier too. Hope things start getting better for you all.