Reddit reviews Deep Survival: Who Lives, Who Dies, and Why

We found 7 Reddit comments about Deep Survival: Who Lives, Who Dies, and Why. Here are the top ones, ranked by their Reddit score. 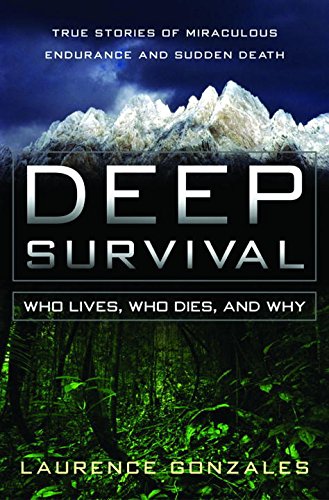 7 Reddit comments about Deep Survival: Who Lives, Who Dies, and Why:

In the book Deep Survival, there is a section that talks about an individual's age and their likelihood of surviving being lost in the wild. Interestingly enough it was the 4-9 year olds that survive the most often out of any age range, due to the way their brain processes their model of the world. 9-13 year olds are the least likely to survive. I may be off by a year on either side for those age brackets, but that's the gist of it. I don't have my copy of the book on hand for a more detailed retelling.

A one year old would have absolutely no chance. Unless, of course, they were adopted by a pack of wolves and befriended a bear and a black panther.

Hoow. Well, I'm in the middle of re-reading The E-Myth, since it's a good refresher and I find myself having to scale up one of my businesses.

I'm in the middle of The Social Animal, by David Brooks, which I adore. I think I'm going to keep it. (That's saying something, since I read voraciously, but I have only one shelf of books I felt was worth revisiting.) The way he's tackled the book is very interesting and it's incredibly deftly done.

I have Republic of Thieves out from the library, the newest in the Gentleman Bastards series. I don't know when I'm going to get to it. When I start a fiction book I tend to read it straight through, and nothing else gets done, so I'm loathe to start one.

I also have TapDancing to Work the new Warren Buffet autobiography, The Compass of Pleasure (which has been on my wishlist so long I've forgotten what I wanted it for) and Medieval Mercenaries a book about the history of mercenaries. I've always been very interested in mercenaries. I don't know why.

Today a friend recommended The Small Business Life Cycle which I already own, so it will be moving up on the list. I really admire the author, a US Army veteran and philosopher.

Good point. A lot of people tend to underestimate Mt. Hood, but people still die up there regularly enough that folks should take it seriously. I just finished reading Luis Gonzales book Deep Survival and he has an entire chapter where he talks about Mt Hood and uses it to point out how people often underestimate how dangerous situations can be.

Hey there. YES. Touching the Void is a must. If you like it, go ahead and read Deep Survival. That book changed my life. So amazing.

By no means a how-to manual. But it does a great job explaining the psychology of what we go through and why so many people make poor decisions in a survival situation.

Actually this is exactly what would have happen.

Crazy that you have an intuition on it.

Go check out the book 'Deep Survival'. There is a chapter in it that mentions a study on done on lost children in wilderness areas. Children under the age of five have the highest survivability rate out of all age groups. According to psychologists this is for two reasons:

(1) They don't have a concept and mental appreciation of 'lost' and;

(2) Children revert back to survival better than adults. They will go and lay under a log, look for shelter, and just sit and sleep. Out of dozens of children found after being lost, they were more often than not found sleeping under shelter areas like logs etc. Also, conserving energy in survival situations is important, as well as either staying put or backtracking. Many adults tend to 'push on', ending up more lost, and losing energy.

Also, interestingly, children aged from five to teens are the worst survivors. Because they start to appreciate the concept of being lost, and have become civilized (in a sense). Notice in the story as well the kid wanted to go back and ride his 'boat'. He didn't have a mental appreciation of an emergency.

The book has a lot of this psychology applied to survival situations (with appropriate sources). It is worth checking out.