We found 42 Reddit comments about Destiny The Collection - PlayStation 4 Standard Edition. Here are the top ones, ranked by their Reddit score. 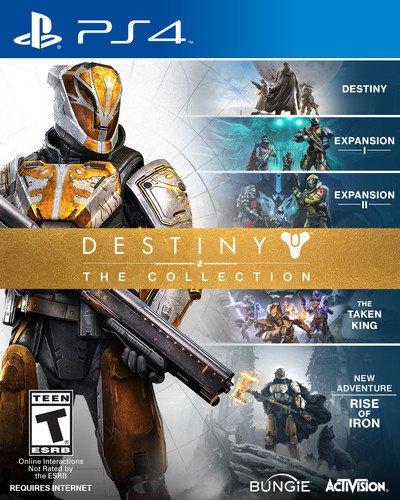 I've heard Destiny 2 has lost it's momentum from the first game. Why spend $30 on the base game or $53 on the base + season pass when they will likely release something along the lines of The Taken King edition and Rise of Iron edition/Collection?

But you can get Destiny: The Collection for pretty cheap right now. I've played it for over 1500 hours since it first launched.

If you wait a bit, it's sure to drop in price even more!

The new game is coming out in September, but there is sure to be a good sized community still playing Destiny for the near future.

If you bought everything day one, then yeah. Now you can get all the content and the most recent expansion for $60.

Um, yes there was

It's called Destiny The Collection.

Buy the collection and read the new player guide

If you have a current-gen console, I wholeheartedly recommend Destiny, especially in its current state. There's always some deal on the game + all DLCs, and by now there's a staggering amount of content.

Edit: this is what I mean. You can get the entire game + all DLCs on sale for $25 on Amazon right now here.

Thats everything, currently on sale at amazon $25

Exactly how hard did you look?

Questions from a DLC perspective:

What specific copy of the game do you have?

It's cheaper than the single Rise of Iron DLC would've been, and it includes The Taken King (an absolute essential, basically Destiny 1's Forsaken DLC).

Destiny: The Collection is the best way to go imo. It comes with everything. (link above is amazon $39.99)

There is a "Complete" edition you can buy for PS4/Xbox One. I bet you can find a used copy for $25 or cheaper. Has all the DLC and is ready to go!

You can get a more current and accurate answer on what the game would be like for a new, DLC-less player by asking r/DestinyTheGame.

But if you already have the game in hand, it seems like you'd be better served giving it a try and seeing if you even enjoy it before starting to consider whether or not to buy all the DLC (which you can probably do cheapest by buying the collection.

It's $60 on PSN unless you're not in the United States.

If you're fine with getting another disc and are in the US:

The Taken King was worth the original $60 price in my opinion (it had an actual story and the April update made the grind negligible!). Year 1 Destiny absolutely did NOT earn it's price.

Year 1 Destiny had a bunch of problems, but you have to hand it to Bungie because they listened to our feedback and improved the game drastically to answer that feedback.

The only problem is you'll have a hard time catching up since the whole community will be focusing on Rise of Iron. But there will be new players you can find.

Thank you for the feedback! As far as I know, the Destiny Collection will also include The Rise of Iron DLC bundled in,(https://www.amazon.com/Destiny-Collection-PlayStation-4-Standard/dp/B01K63R7HY/ref=sr_1_1?ie=UTF8&amp;amp;qid=1474046056&amp;amp;sr=8-1&amp;amp;keywords=destiny+collection+ps4) so I won't have to pay $90, only $60. And I really enjoy RPGs so this may be the move.

Loot's a lot better since The Taken King's release last year. If you're interested, see if there's a Trial available on your console, and if you're willing to take the risk, [Destiny The Collection] (https://www.amazon.com/Destiny-Collection-PlayStation-4-Standard/dp/B01K63R7HY) releases September 20 and will get you all the content, including the newest expansion.

This is what you need to buy. That Limited Edition you bought doesn't include any of the current content.

I don't play Destiny but would This be a better deal ?

Hey /u/spirit32, I've been playing Destiny since the alpha and I've only just recently been comfortable recommending it to friends. Destiny, the base game, is a trial, you won't feel too satisfied with it. I, personally, consider Destiny: The Taken King as the "base" version of Destiny.

Prior to its release, it really really irked me knowing (but not confirmed) that there was a third subclass locked away behind a paywall. They not only introduced more story with TTK, but also fixed a lot of the way the game handles itself up to that point. (I'm sad you won't get to experience Destiny with Peter Dinklage).

I have Rise of Iron and, while its fun, idk if its a good buy. However, being familiar enough with Bungie, you'll be "punished" for not having it so I'd just go all in. If you can be a little more patient, I think black friday would net you a great deal to buy 2 copies of Destiny: The Complete Collection. Getting into Rise of Iron allows you both to play the best part (to me) of Destiny: The Iron Banner. Previous to ROI, the event was held in "the tower," now its held in a new social space that is exclusive to ROI.

At it's current price of $48, I think this is a fair price for all the content it brings with it (complete collection).

I'm confused, the collection pack does come with ROI?

Very doubtful honestly. I've been keeping a close eye on sales for Destiny 2's DLC and it's never happened. Either the base game is the only one that goes on sale, or sites with voucher codes (e.g. GreenManGaming always excluide Destiny 2's DLC as an option for using the discount.

There could potentially be a sale on the season pass as we approach the September expansion? Maybe? It's more likely that they'll put a new version of Destiny 2 on sale in December which has the base game, Curse of Osiris, Warmind, and the September expansion all bundled into one (much like the Legendary edition of Destiny: The Taken King and Destiny: The Collection) I honestly don't know though.

Your post has been removed for the following reason(s):

Rule #4 - Please link direct to the deal whenever possible. Do not link to other "deal" websites or pages. Please repost using the direct link below

[Message the Mods](https://www.reddit.com/message/compose?to=/r/PS4Deals&amp;amp;subject=My submission was removed&amp;message=I have a question regarding the removal of this submission:) if you feel this was in error. Thank you!

You can find the Collection available pretty much everywhere for $40 - probably cheaper if you want to dig more.

I think you want this

It's 40 dollars for the physical version, 60 for digital a code. maybe you can find a better price used? also, it's a lot of content for 60 bucks, and the digital version means you don't have to keep the disc in the system, which is nice if/when you become obsessed with the game.

the newest expansion by itself is 30 dollars, so it really doesn't seem that bad to pay 40 for the entire game, or 60 for the digital version.

But I'd recommend getting Destiny 2

You could purchase Destiny 1 right now and sprint through enough of the story to understand what's happening before D2 comes out. Get this edition (maybe wait til it's a little cheaper). You won't collect-em-all but it's a fun universe to experience - and you can do all the story missions with 2 other friends. As for the raids, likely would have to get carried through those or just read a wiki about the story from them.

Well theres not much to do unless you get all the DLC. Try and keep an eye out for The Collection to go on sale.

If you want a game to hold you over till sept, it is fun. where did you leave off?

You arent buying the correct collection. It should be around 60$ and include ALL dlcs. see here
The game is super fun to play with people and so if you are playing alone you will find it hard to stay up to date with the highest level stuff without using 3rd party lfg programs. It is heavily reliant on guns rather than abilities but at thwe same time the game feels very different depending on which class/subclass of abilities you are using. If you can find a friend or two to play it with i highly recommend it

Yes, Amazon. Roughly 27 USD. I bought this when I switch to PS4. Definitely worth it.

You can grab the collection here The collection is a 60 dollar package will ALL dlcs up to date. I also recommend checking out /r/DestinyTheGame


Tl;dr buy the 60 dollar collection with all the dlcs

That releases on the 20th and has the base game plus both full expansions included. (and a token to jump one character to max level)