We found 11 Reddit comments about Directing Actors: Creating Memorable Performances for Film & Television. Here are the top ones, ranked by their Reddit score. 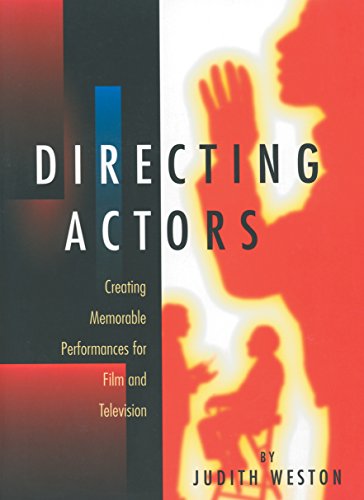 I'd like more directors to read and understand Judith Weston's book. You might just need to take a different approach to get them out of their funk, and the Weston book offers a lot of different tactics for working with actors to bring them to a safe creative space, even describing how different approaches to communication can resonate better with certain actors depending on age, training, and temperament.

Anyway, if you want to understand the difficulties of acting, take an acting class. Seriously. Be on the other end, without the safety net of your own writing and your own set, being evaluated and stared at and trying to find truth in the moment. It'll make you a better director, because you'll know what your collaborators are going through.
Here's a basic primer on what actors go through. Read it the whole way through.


Back to the 'difficult' actor thing. Mostly, 'difficult' actors should be weeded out during casting. That's square one. But if an actor's being 'difficult' on set, something is off in the creative relationship, someone isn't feeling full trust or safety or respect in either direction (or is a callous asshole, always a possibility). A problem actor is probably too much in their head and feeling offended/disrespected (whether justified or not). You need to get them out of that headspace, give them another target to focus on, reconnect with their scene partner, and give them an area where their work feels 'important.'


I was once working on a television show where a very well-known actor was having a 'difficult' day. It was late into a sixteen-hour shoot day, he was tired, he was frustrated, he disliked the section of the scene they were working on because he thought it was sappy and dumb, and he was having trouble and tripping over the exact sequence of words in his speech, we couldn't even get a master of the whole section. You could see it building into a situation where he was closing himself off from everybody. We could have sat there and stewed in the difficulty, but the director came up and went at him a little obliquely.


He said, "Hey [BLANK], I actually just want to get a good look here for the first part of this line, we're gonna be on [SCENE PARTNER]'s coverage anyway for that next bit. Don't worry about the rest of the speech, can you just give us the first half of the line a couple time so we catch that moment where you put him in his place? [SCENE PARTNER'S CHARACTER] wasn't really listening a second ago, so just stop him in his tracks with that opening phrase."
Well, of course he could commit to half of a line even if he's frustrated with the scene as a whole, sure, whatever. So we went back on a bell and rolled camera, called 'action.'
The actor started the line, trailed off, started it again by kind of teasing his scene partner, who pushed back a little, smiling. He did it again, this time really demanding the other actor's attention. He had something important to say, so he'd better listen. His eyes lit up as he spoke, the weight of the long work day fell off his frame and his whole demeanor opened up. Instead of a cranky man having a rough day at work, I suddenly saw that performer I'd watched on the screen as a child, saw him play. For a little while at least. He got through most of the first line, (well past the halfway mark) and had a little hangup on a word at the end of the sentence.
"Cut."
"Great, wonderful. [SCRIPT SUPERVISOR], how did we change the wording of that joke that comes after this? Thanks. Hey [BLANK], we'll be on his coverage there anyway, but can we do the back half of that line transitioning into the next bit? We won't need all of it, but just run that little section before you tell him [whatever the next line is]."

So we did the next section and saw him manage to open up again, this time fully present for the second half of the line and the following sentence. We moved forward, bit by bit, until we had captured him being engaged in each part of the coverage of his little 4-line speech. Then we went wide, got him entering and exiting, and sent him to his trailer.


That was about as 'difficult' as a professional actor can be on the basics--not knowing his lines fully, getting locked off, angry and frustrated, but the director guided him into something workable, got him off the set, and got us back on schedule. He had to give his editor less to work with than he'd like to and live with what were essentially pre-decided cuts, but because he'd planned well and worked at not embarrassing or overloading the actor who was being a bit of a diva, production was able to move forward. When the episode aired a few weeks later, the sequence flowed fine.

Read this. As a non-actor this really helped me.

use action verbs instead of adjectives http://www.amazon.com/Directing-Actors-Memorable-Performances-Television/dp/0941188248/ref=sr_1_1

Lumet's book is good, but the best practical book I've read is by Judith Westin. She used to teach workshops in LA and I learned the most from her.

On Filmmaking by Alexander Mackendrick
http://www.amazon.co.uk/On-Film-making-Alexander-Mackendrick/dp/0571211259
It's dated but still has tons of applicable information, plus it's very inspirational to boot. Best book on filmmaking I've read.

Definitely see if you can get your hands on this book

Also there are a lot of YouTube interviews and and behind the scenes videos with directors and actors talking about the process :)

This sounds like a broken down summary of the first few chapters of "Directing Actors" by Judith Weston.

I just ordered this and I haven't received it yet, but I'll still go ahead and recommend it to you: http://www.amazon.com/Directing-Actors-Memorable-Performances-Television/dp/0941188248

&gt; Listening shouldn't be a problem really, if anything it's more that I don't stop listening in some cases

That's not a bad thing. It's actually a really good thing. Listen for two things: 1) a cue to respond, and 2) the attention of the other person. You can listen and talk at the same time, so sometimes, when the other person throws you a cue, you can just start talking. Just make some sort of sound and see where it goes.

Also I feel ya about the people beating to the take... it's like dude! I'm listening to you, can you please listen to me? Or be patient? That's almost more on them, because listening is a two way street.

Oye, that's rough, having to do a scene with someone, and you're required to do it with someone before moving on... sounds like Fiasco, which while I love the idea of that game, is really intimidating. Also coming up with a character on the spot can be a challenge.

Maybe try this: have a list of action verbs for a scene. Those are the things you are going to do. Just literally have them in the back of your pocket, and when it comes time to do your scene maybe take a minute and ask the others what are you literally doing. Then pick one of those action words and let your character run with that. You have your secret goal, you have the group goal... maybe pick two? One will do if that seems rather difficult. I'm going to pretend the game is Fiasco for a second for simplicity. Let's say you are robbing a bank. You are the driver. You are talking to the guy who is leading the heist. You are literally planning the heist with this guy. But now, what is your goal, and what is the groups goal?

OK: your action, which is where that action verb is coming in, is how you are going to play the scene. Are you hostile to his idea? Are you going to interrogate him for the info because you feel there is something more to him then meets the eye? Are you going testing him, because you want out of the group and want to see how far he'll take the situation if shit hits the fan? Are you giving him a litmus test to see how much of a psycho he is? Or are you the psycho, seeing if he'll take it far enough? You just pick that action word and stick to it. Maybe you can do two action verbs, one for the primary and one for the secret goal. You're pursaive for the primary goal ("we should do this for the plan") while you're more inquisitive for the secret goal ("so... what happens if we have hostages? We have masks so they can't easily identify us right?")

Now again, we're talking action verbs. Things like "To interrogate," or "to persuade," or "to punch" (please don't actually punch anyone... I don't want to end up on rpg horror stories). And those story cubes can help too: maybe they'll give you a clue to what action verb to pick.

Here are a few more links to help.

A book, that has to do with directing actors, but a lot of the concepts overlap. Here's the amazon link but you can also find ebook versions. Think of this as sort of directing yourself.

Here's something that can help with character traits. Blackjack's Character Personal Information sheet. It's for Shadowrun 3rd edition but you can use it as a jumping off point for any modern system, and inspiration for any other system.

Garak's advice on lying (lying is a skill and like any skill needs to be practiced constantly). Not saying you should make rpgs a lifestyle, but the more you try something the better you can get. I mean I'm not saying any of this is super easy, but it can be fun and that's the most important!

Also Garak from DS9 is a good example of the whole action verb idea: he has a goal, he says 1 thing, he means another. I know that's a little overwhelming and it's like "well how do I do that?" and the answer is practice. Also I just recommend Star Trek DS9 in general. It's a really good show.

Here are two screenwriting books that I really love that don't get a lot of love:

Writing for Emotional Impact and The 101 Habits of Highly Successful Screenwriters by Karl Iglesias. Those two go pretty unnoticed but are really insightful.

Directing Actors: Creating Memorable Performances for Film &amp; Television and The Film Director's Intuition: Script Analysis and Rehearsal Techniques by Judith Weston. It really helped give me an understanding on how actors look to find their performances and has really informed how I write both dialogue and character actions.

Let the Crazy Child Write!: Finding Your Creative Writing Voice by Clive Matson is great for just untethering your inner critic in some ways.

Lastly, a bit of an unexpected one The Definitive Book on Body Language which gives some interesting insight on how people behave.