Reddit reviews Don't Worry, He Won't Get Far on Foot

We found 3 Reddit comments about Don't Worry, He Won't Get Far on Foot. Here are the top ones, ranked by their Reddit score. 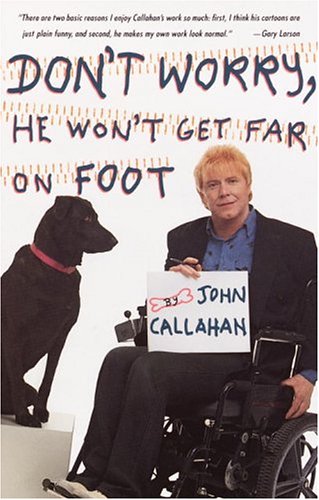 3 Reddit comments about Don't Worry, He Won't Get Far on Foot:

I'm not a doctor and I'm not a shrink, but I'm a guy who got his second DUI after rationalizing my drinking that led to my first DUI in terms of external factors: my divorce, financial problems, having a bad boss, etc. Except that by the time of my second DUI, I didn't really have any of those problems--new boss, over a decade since I'd separated from my wife, money problems taken care of, and so on. I wish I'd scanned one of my favorite John Callahan cartoons; Callahan was a recovering alcoholic who had been paralyzed after being in a drunk-driving accident, and some of his work deals with his addiction and recovery. (I'm pretty sure that it was in Don't Worry, He Won't Get Far On Foot, his autobiography, which is an excellent read, although he has some weird issues with lesbians.) In it, he's in a meeting, listening to others' excuses: "I drank because my childhood nickname was 'Corky'!" "I drank because my shoes were too tight!" "I drank because there's a machine strapped to my back that forces me to drink!" The real joke being, of course, that Callahan is a quadriplegic, which would be an excuse to drink if there was one, except that he'd been an alcoholic before the accident, and was sober for most of the time after it, until his death not too long ago.

I completely get social anxiety, and it was my excuse for a while, until after I sobered up and realized that I drank in no small part to avoid socializing; even though I drank in social situations, I also went to bars with a book to avoid having to talk to people. (It really wasn't just to read, although I rationalized it as such, because I couldn't remember big chunks of what I'd read; it was a big revelation to revisit some of those books and see how they made so much more sense.)

tl;dr--there's nothing wrong with talking to a counselor about social anxiety, but here's a little experiment that you can try at the same time: don't drink for a month. At all. Nothing with meals, nothing with family, with friends, alone, period. If you're just drinking it for the taste, then it shouldn't be a problem. (I like Indian food, but I haven't had any in a while, and I don't wake up in the middle of the night wondering if there are any Indian restaurants open.)

On a professional level, I would recommend something related to anatomy. This is one of the toughest courses in any curriculum and any advantage will be useful.

On a more personal note, I would recommend reading something that gives a patient's perspective -- something that helps us understand what it's like to be a patient or have a disability. Here are a few of my faves:

Others have mentioned books with more thorough discussions of Reagan, so I'll recommend something a bit different: John Callahan's Don't Worry, He Won't Get Far on Foot, the quadriplegic cartoonist's memoir. In addition to a gripping and dark (yet hilarious) portrait of alcoholism and what it really means to hit rock bottom, the book includes a rant about Reagan and just how difficult Reagan's policies made it to successfully transition off of welfare.