We found 7 Reddit comments about Dream It! Do It!: My Half-Century Creating Disneys Magic Kingdoms (Disney Editions Deluxe). Here are the top ones, ranked by their Reddit score. 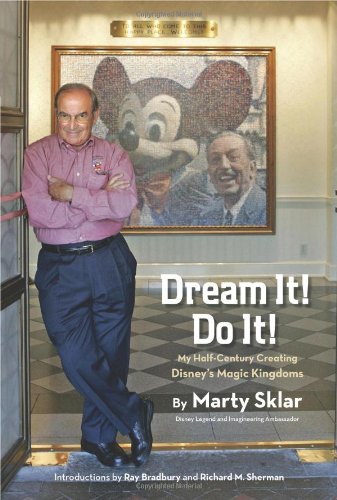 7 Reddit comments about Dream It! Do It!: My Half-Century Creating Disneys Magic Kingdoms (Disney Editions Deluxe):

Oh he was? I guess that's why he and his company championed and produced some of the most effective and anti-Nazi material that's still watched today.

I also guess that's why Jewish employees at his company wrote books dedicated to memorializing his process and the company he founded.

The [Retro Disney World Podcast] (http://www.retrodisneyworld.com/) is extremely well done as far as podcasts go. Every episode is history based.

This is a fantastic book from the man behind so many of the decisions.

Marty Sklar and Rolly Crump's books are essential reads, as far as I'm concerned. I started reading Marty's book for the info on Walt Disney World and Epcot, but came away fascinated by the development of Japan and his business management advice, the most.

There's also a book called Dream It, Do It released last year. I've got it next to my bed but yet to read it. This was recommended by another reddit user and the reviews look good.

I really enjoyed 'Dream it! Do it!' by Marty Sklar, ex Disney Imagineer.
http://www.amazon.com/Dream-It-Do-Half-Century-Creating/dp/1423174062

Marty Skalr has a book. I havent read it yet, but I own it. I saw him talk about it some at the EPCOT's 30th panel he did, and it sounded like a great book.

I also managed to find Building a Dream (the 96 version, not the 2003 version) on eBay for $10. Either version routinely goes for over $40 since its out of print. Its a good book, too.

I also own How to Be Like Walt which has been an OK book so far. There's better biographies out there of him, though if youre looking for ways to apply Walt's life as an inspiration to your own work ethic, this is a good book.

The Imagineering Workout is a book I dont own, but is one that I'll probably be buying soon.

Oh, and also look for two books from Leonard Kinsey (I bought them on my Kindle) Dark Side of Disney, about hidden secrets of WDW, and Our Kingdom of Dust, a fun fictional tale set at WDW. (Both bordering on PG-13/R).

And also a book by the original Dreamfinder Ron Schneider called From Dreamer to Dreamfinder, about his journey from other themeparks to WDW and more, is a good book. Also bought on my Kindle.