Reddit reviews Dynamic Nymphing: Tactics, Techniques, and Flies from Around the World

We found 7 Reddit comments about Dynamic Nymphing: Tactics, Techniques, and Flies from Around the World. Here are the top ones, ranked by their Reddit score. 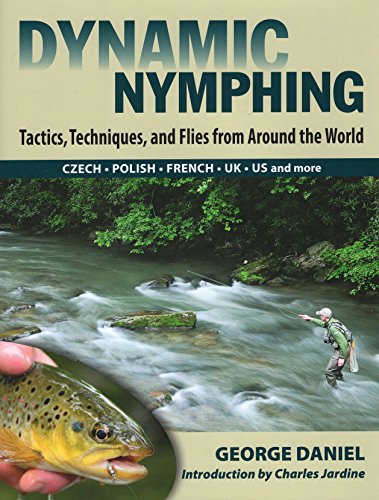 7 Reddit comments about Dynamic Nymphing: Tactics, Techniques, and Flies from Around the World:

There are a bunch of us here.

I run a Cortland Comp 10'6" 3wt with 100gr Cortland nymph line and a custom leader/sighter out here in Eastern PA.

How deep into the nymphing game are you (for others to help w leader set up and suggestions)? Do you own this yet? If not, you should buy it!

Buy this book, it's worth every penny.

Where do you live? CT?


Fly fishing has a pretty serious learning curve, from my experience. I assume being avid fisherman, you are pretty comfortable working a lure such as a Rapala? The very fist type of fly I would suggest you try is streamers. It's very straight forward and you can work the streamer like a standard lure. Buy some wooly buggers in various colors and stick to them for a while.


Secondly, catching fish in february isn't easy. If we're simply discussing chance of success, I would suggest you focus your fishing efforts in April/May/June when the water temps help fish activity.


After catching some things on buggers, I would try nymphing and dry flies. A great book on nymphing is Dynamic Nymphing by George Daniel


Lastly, if you are still struggling, find someone to bring you out and work with you. I'm too far from CT to assist, but you can hire a guide or maybe someone on this board lives up there and would take you out and help.


Best of luck! Would love to see an update to this when you finally do land some fish!

It seriously takes a lot of tying practice to make them not bulky - Use smaller thread, less thread wraps and all together, less material.

If you're in the mood for some deep research and stuff, get George Daniels "Dynamic Nymphing" book - It's not all about that euro, it covers everything. Especially weight.

George Daniel is the master. I was fortunate to take a class with him a few years ago. His book Dynamic Nymphing is probably the best book on the subject.

Two fly boxes = either a newbie, a true veteran, or somebody with waaaay more discipline than I have.

Yeah, I see those E12 caddis-ish things now. Those will probably work, but you'll probably want some EHCs too. It's a ridiculously productive pattern.

Thought of one other thing: you may want some hoppers. You could grease up those muddlers and fool some fish, but they won't float for long. Hucking big hoppers along a grassy shoreline is one of summer's finest pleasures in the Western US.

Nymphing....yup, that's a big subject. Yes, it can be VERY productive, particularly on the crowded tailwaters (aka tailraces, the stretches of water beneath a dam with controlled flows; many of them function like spring creeks in terms of producing bugs - and therefore large quantities of large fish). It also gets very technical, even down to specialized rods and lines, plus a variety of rigs and techniques and, of course, fly patterns.

There are multiple styles of nymphing ranging from simple to uber-techy. Here's a quick-and-dirty intro that'll probably start a war...

I've got all sorts, as I tie my own. I do use a 11' 3-wt., but you can "high stick" nymph with any length of rod. I know there have been posts in the past on Euro-nymphing, and so, just search.

If you really want to know more, this book by George Daniel is a classic. He also has some videos on YouTube.