We found 28 Reddit comments about Ekobrew Classic Reusable Filter, Keurig 1.0 and 2.0 Compatible - Violet. Here are the top ones, ranked by their Reddit score. 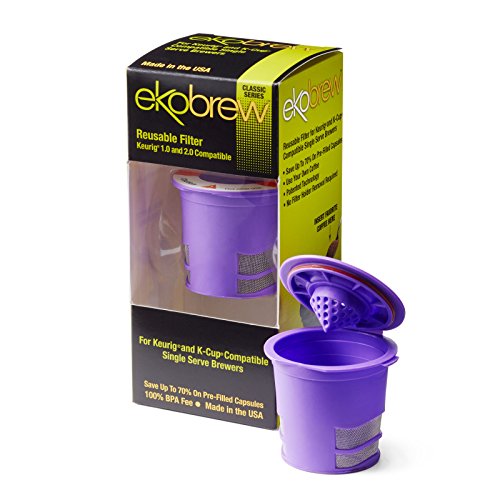 Keurig 1.0 and 2.0 compatibleMade in the USAEco-friendly | save up to 70% on CoffeeEasy to use and clean, dishwasher safeNo filter holder removal needed100% BPA free | an economical and eco-friendly alternative to K-Cup packs for millions of Keurig owners
Check price on Amazon

I like the EkoBrew reusable k-cup ($8 on Amazon here). Just buy whatever coffee you like and save money!

When my office got it's first Keurig I was hestiant at first, then I discovered this little gem and now I enjoy the occasional cup when I am too busy to make a French Press for myself.

A reusable filter like this eliminates the waste of the k-cups and allows you to use your own coffee grounds. I personally think it makes too weak of a cup though, considering the amount of grounds in it, especially if you chose the higher volume outputs (8 or 10oz).

Definitely consider buying an Aeropress if you want to experience a huge increase in coffee quality. It tastes a million times better than the Keurig, and are basically the same thing in terms of one cup convenience.

Am I the only one that uses these?! I mean, I love it.

I have one of these in my office, because no one here ever finishes a stupid pot of coffee and it gets moldy and gross. For like a week we used the k-cups that came with the machine, but we are all poor and didn't want to have to go buy a ton of those supper expensive (and as you so mentioned non-recyclable) pieces of trash, so we all just use the reusable cup. It was pretty cheap, easy to use and once you get the proportion of coffee you want in it, works AWESOME! I highly suggest you go buy one now if you have one of these machines.

The Keurig refillable cup is a terrible design. I've never had a problem with overflow, but it's cumbersome to use, and it's annoying to have to stash the k-cup holder.

I also have an Ekobrew cup that works great. It's a direct replacement for the standard k-cup, you just fill it, snap the lid closed, and pop it into the holder just like you would a regular k-cup. Tough to beat for $10.

You can buy plastic empty cups for a Keurig machine, and bring your own coffee to work. Much better and fresher than the coffee they make.

you might want to look at these. reusable k-cups that you can use your own coffee with: http://www.amazon.com/Ekobrew-Refillable-Keurig-Brewers-1-Count/dp/B0051SU0OW

This third party one is better designed and cheaper than the official reusable filter.

Hence why I picked up a reusable k-cup that I can just rinse out and refill with whatever coffee I decide to buy from the store. Also about 60-80% cheaper than buying k-cups.

I currently use one of these machines.. :( I advise you not to get one just because of the quality of coffee it makes, and instead get an aeropress or something along those lines.
The only main difference between them is that some have timers, some are larger so they hold a taller mug, have a water well, etc. Purchase what suits you and what features are a necessity. The one thing though that makes this machine a bit better is to use a reusable cup like this. I have used this one for about a year and it saves a lot of $$ since K-cups are expensive and their coffee tastes really stale IMO.

The machine has a reservoir on its side that holds about a dozen cups of water. Takes about 15 seconds once a day to fill. To be a nice guy I usually top it off while it's pushing out my cup of coffee. And you don't have to wait for it to boil, it trickles water into the mechanism and uses an in-line heater like an electric tankless water heater so it heats the water as it dispenses. Literally, it's ready in 20 seconds. I walk into the office, detour to the break room, pop a K cup in, hit the button and by the time I've got a spoon and cream from the fridge, the cup is ready to go. Then I open the machine and toss the used packet and go sit at my desk. Start to finish less than 30 seconds. There is no way you can do that with your method conveniently.

If you want to use your own coffee in the system you can, by the way. Keurig and others sell re-usable K Cups you can use to make your own coffee. In fact, if you buy the K-Cup machine on sale at Costco at the moment, they give you 60 KCups to try and the refillable cup is included.

"The k-cups probably aren't even just coffee, but probably some sort of mix of a bunch of ingredients."

I've taken a few apart for curiosity's sake and the coffee K cups are indeed just very finely ground coffee tightly packed into a filter container. Some of the fancier "cappucino" or hot chocolate ones on the other hand are doses of powdered mix that dissolve in hot water, but I don't personally like those.

"because if a competitor shows up making k-cups, they're getting sued by krueger."

This has already happened, but no lawsuits have appeared. About half of the cups we stock at the office are non-Keurig approved pods like these. Despite the very different design they work fine. The reason is the patent and exclusivity of the KCup design expired in September 2012 so now there's a a whole raft of other pods on the market from lots of sources. The same thing is set to happen with the Nespresso pods next year so that's why Nestle is advertising heavily to wring the last few months of being able to charge $1.20-$2.00 a pod out of the marketplace.

The bottom line is it's a good enough tradeoff between convenience and price for us. We're getting our K Cups at around .50 a cup, which is 4x cheaper than the coffee I used to sometimes pick up on the way in at Tims, so it works. And at home it was enough of a hassle that I never made coffee at all, instead drinking pop which is even more expensive. Now I have a cup of coffee instead and oddly enough it's probably better for me too.

Why not just use a reusable k-cup and use your own coffee.. http://www.amazon.com/Ekobrew-Refillable-Keurig-Brewers-1-Count/dp/B0051SU0OW/

no, there's lots of reusable k-cups out there made by third parties. don't see them getting sued back to the stone age.

Use in my 2.0 and it works great. Has two bright neon orange stickers that attach on top of the cup that trick the 2.0.

Obviously not as cheap as your solution but faster than the my k cup machine and (if applicable) your co workers won't get mad that you took the machine apart to use it.

Noooooooo.
That was basically the best reusable k-cup sale. Compare to a single reusable cup for $8 of comparable quality. http://www.amazon.com/Ekobrew-Refillable-Keurig-Brewers-1-Count/dp/B0051SU0OW -

I'm making a pot of coffee right now, though I'm probably only going to have a cup or two. So much coffee is going to waste! That's why I have a refillable cup for K-Cup Brewers on my wishlist. It's only $5! I have a Keurig, but the K-Cups can be so expensive.

As for a song suggestion, First Day of My Life by Bright Eyes.

Thanks for the contest!

It depends on the packing - if you tap it on the counter to settle the grounds in and fill about 3/4 full (doesn't it have a 'fill to here' line in it?) then that should give you more than brown water.

http://www.crateandbarrel.com/ekobrew-stainless-steel-elite-k-cup/s100225?a=1552
That's ridiculously expensive but it's all steel and looks like it'll brew well.

I actually have this one: http://www.amazon.com/Ekobrew-Refillable-Keurig-Brewers-1-Count/dp/B0051SU0OW but it has a screen on the sides and bottom, letting the water flow out barely touching the grounds. I added some tinfoil inside to force the water to stay in the cup a few milliseconds longer to get better brewing.

Get one of these: https://www.amazon.com/Ekobrew-Refillable-Keurig-Brewers-1-Count/dp/B0051SU0OW/

And a box of these: https://www.amazon.com/Optional-Coffee-Filter-Ekobrew-Single/dp/B00H4F3A88/

Drop the filter into the cup, the lips will match up, don't force it down into the basket, the cup will close and seal around the lip of the filter just fine. Grind your coffee a little finer than usual, fill until the filter is 3/4 to 7/8 full, gently pack it with your thumb, insert into Keurig, hit the smallest cup button. It's only slightly better than a run-of-the-mill drip machine but it's decent enough to be enjoyable without additives.

Edit: This will never net you great coffee, only slightly better than a Black and Decker drip machine coffee. It's pretty much the best product you will ever get out of a Keurig. Have fun.

Eko-Brew K-Cups are great if you're looking for a fresher solution. http://www.amazon.com/ekobrew-Refillable-Keurig-Brewers-1-Count/dp/B0051SU0OW

They let you put your own coffee into a K-Cup and brew that.

The fix for expensive cartridges, and a solution to use your favorite fresh ground coffee beans. I make a mug full every morning and that's it. For this purpose it's incredibly quick and convenient.

Of it is. I actually have a different model I realized I have this one

Try the ekobrew with the paper filters

I would highly recommend this. The coffee tastes better and it works great. Also environmentally friendly. There is a small gasket on the needle that needs to be adjusted for the reusable cups to work right.

A possible compromise: Try a reusable K-Cup with your own brand?

It's no french press, but works for me. Either that, or grab an electric kettle like /u/p1nh3ad suggested.

&gt; I can make it ANY strength i want (you know, meaning it wont taste like flavored water). And i can use any coffee bean i want in the entire world to make it. None of these ring true for the Keurig.

I can too with one of these, most of us use these.
http://www.amazon.com/Ekobrew-Refillable-Keurig-Brewers-1-Count/dp/B0051SU0OW/