We found 3 Reddit comments about Empire of Cotton: A Global History. Here are the top ones, ranked by their Reddit score. 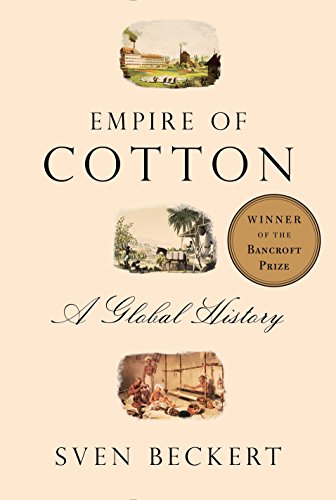 3 Reddit comments about Empire of Cotton: A Global History:

What? How is SJW which I am not even remotely close to, related to Eurocentrism?

Rather than read some Katju's blog, I would recommend (VERY STRONGLY) that you read the following,

A couple of things:
Re: Machiavelli- This is what historians do, when they are doing a good job of adapting their work to a mass audience. So in that course, you will be led through a (riveting and fun!) deep read of Machiavelli's seminal works, provided with the historical context of his life and world, but all towards thesis-driven analysis of what he was doing, what it meant to him, what it meant in his world, and what we might make of it now. He talks explicitly about the historical method as he applies it, and you are encouraged (but not required, it is a course for everyone!) to read alongside his progress through the works and strengthen your capacity to interpret primary sources, to a basic level.

Re: Cotton: Cotton is a huge topic. Good history books about it look like this, which is to say, the author adopts a critical lens that seems like it's from another field, but is in actuality the historical, historicized application of a way of looking at things. Peer and popular reviews both find it to be a deeply persuasive way of destroying the myth of slavery as some kind of pre-capitalist institution, and rather a foundational institution of American and global capitalism. He also illustrates how cotton didn't become "de-enslaved" as a result of the American civil war, but rather simply encouraged extraordinarily aggressive extraction and colonial-style exploitation by Europeans of diverse existing and new colonial holdings, notably the "Slavery is illegal buuuut" British in India. Now, you may find none of these persuasive or useful, in the end, but it is undeniably a provocative, thesis-driven examination of the topic that works towards important questions, and with a topic like cotton, there are just a ton of good books out there by historians doing other things with it.

To give you an example, one of my specialties is legal history. So when I work on an issue (for instance, corruption), one of my default starting points is to organize the facts in a legal-historical manner, not to be confused with a legal analysis that a law professor would do even though it might integrate such analyses at various points. But it will be in service of a historical thesis ("x argument about the role/change over time/effects of corruption in a place"), and while it might not wind up answering a question you care about personally, you can rest assured it bears little resemblance to the "Stuff happened! Here are some stories about it with a tenuous connection to current evets!" things that clog bookstores.

Another example: Intellectual history sounds like philosophy, but it's not about debating the merits of the ideas per se even if it integrates analyses of the ideas at some level; it's about the historical context, the place of the ideas in a given time, and so on. You would share ideas between a 17th Century European Intellectual History class and its Philosophy equivalent, and would likely have many of the same readings, but what you would do with them and how you would think about them would be quite different, and if you specialized in it as a historian your papers and books would be quite different from a philosophy professor's even if you have common ground. Does that make sense?

tl;dr-I would say what you are looking for is not popular history so much as history geared towards non-specialists, and a great way to get recommendations for that is to look at the askhistorians book list and, of course, ask questions about potential sources towards the questions you are interested in (because there may simply be an article or whatever you'd miss that covers a lot of the ground). It's the same way that you wouldn't want to mistake pop science writing as a sign of what the particular scientific field is up to or what it can offer you or me as a layperson.

Empire of Cotton was excellent. The basic argument is that the history of cotton is the story of the becoming of modern capitalism, and he defends it very well.