We found 3 Reddit comments about Empire's New Clothes: Barack Obama in the Real World of Power. Here are the top ones, ranked by their Reddit score. 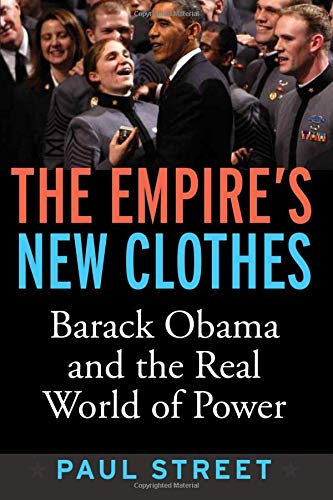 &gt; The reason Obama is so dangerous, is because he has succeeded in quelling public outcry and opposition to so many of the same policies Bush was hated for.

That's exactly why he was picked. That's his job.

&gt;And if your goal is to militarily dominate and control regions like the Middle East

That's not his goal. That's your unfair misrepresentation of his view that is utterly detached from reality.

&gt;then war becomes all but inevitable with countries that do not wish to cooperate with your plans. Saddam's Iraq, for instance, or Iran.

you remember who invaded Iraq right? And how many countries has Obama invaded again?

&gt;It is because our foreign policy is essentially imperialist. Both parties are dominated by imperialists.

I agree that Bush's invasion of Iraq and Imperialist, but once you're in you don't really have a choice. The only sensible thing to do is stabilize the country and leave as soon as possible, which is exactly what he's done. So when else has democratic presidents launched Imperialist wars? Enjoy bringing up history a half-a-century old.

&gt;So Obama's job was to rebrand US Imperialism, and sell liberals and progressives on it.

And who gave him that job? Sounds like you've got some conspiracy theories you're hiding from view to avoid looking like a tin-hat wearing nutjob.

&gt;Iraq "withdrawal" was drawn up by Bush admin

Why does that change anything? Why does it matter who withdrew forces? Doesn't it equally destroy your Imperialist argument? And actually, the withdrawal plan wasn't drawn up by Bush, just the end result that all troops be out by Dec. 31, 2011 was. How that was accomplished was all up to Obama, and he's done that.

I'm not going to buy a book and read it just because you can't be bothered to articulate your argument.

&gt;And to top it all off, he publicly argued we ought to escalate the Afghan war. Escalation=more dead Afghan women and children.

Escalation doesn't always equal more dead people. It could be that more would ultimately die by allowing Afghanistan to be a failed state. It is this kind of simplistic logic that runs through all your opinions. The fact is, when Obama took over, the Taliban was resurgent. What would you have done? Withdrawn as soon as possible? even if that meant the Taliban would take the country back?

Should we just let terrorism grow unchecked? Should we not do something about actualmurderers?

&gt;All these things make him a mass-murderer.

If you're going to use legal words you have to understand their meaning.

A murder is the unlawful killing of a human being with malice aforethought. Obama hasn't unlawfully killed anyone. He's not a murderer if you understand the definition of murder. He's killed plenty, but those killings have been lawful. You can argue they shouldn't be lawful, but to argue that he's a mass murderer betrays your ignorance of the legal definition of murder.

This is an indication that the American Ruling Class, aka Wall Street, the 1%, etc., prefer Obama.

What they really need is someone who can do PR, marketing, a makeover for this rigged, evil system, etc. effectively.

And of course Romney can't do that. The peasants would catch on that they're being totally ripped off.