We found 8 Reddit comments about Espresso Coffee: The Science of Quality. Here are the top ones, ranked by their Reddit score. 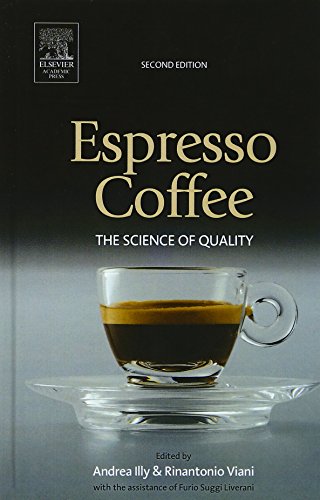 8 Reddit comments about Espresso Coffee: The Science of Quality:

Indeed :) I used to own my own coffee roasting business and developed espresso blends. If you want to geek out about coffee, I recommend this book, which is about as scientific as they come (most other coffee books are based on anecdotal evidence at best):

Coffee literature seems to be stuck in the stone age. If I were going to look for a reference, I would start here but since this book is out of print, I don't have it. If I'm spending that kind of money, it's on gear... I've come this far on my own anyhow.

&gt;edit: I guess I have misunderstood that espresso is better than coffee. Sorry, I am new to the coffee world, but I still ask why do some people prefer espresso to brewed coffee? And how do they differ chemically?

Why do some people prefer Strawberry ice cream over vanilla?

I find that with some roasts of some beans, I prefer them as espresso. With others, I like them better as filter drip. With still others, French press is just the thing. I don't know enough about the chemistry to answer (I prefer just going with what tastes best to me, and haven't felt too much need to dive into explaining it in terms of chemistry) but if I wanted to know, I'd grab a copy of Dr. Illy's book and start reading. (The second edition was edited by his son and can be found on amazon.)

There are many sources that recommend protecting coffee from light when storing it (as well as from air/oxygen, heat, and moisture). So, although I don't know what the specific light-induced reactions are in coffee, the answer is probably that yes, it is susceptible.

Edit: I was able to find this:
&gt;Light plays a catalytic role in many chemical reactions; in the case of espresso (arabica) blends, particularly rich in unsaturated fatty acids, light catalyses the prime trigger of their auto-oxidation reaction, i.e. the formation of H∙, R∙ (alkyl) and ROO∙ (peroxide) free radicals which then cause the reaction to propagate.

The quote is online here and here. The source is this book. In the Google Books entry, the first half of the quote appears at the bottom of page 244, while page 245 is not available for preview.

From what I've read, some acids present in the green coffee interact and convert to aromatic compounds, and these in turn the flavors. Also, some of the acids are present in the roasted bean, but they don't produce flavor, but more taste, the acidity, or brightness that some people refer to.

Composition of raw arabica coffee bean, according to this book, pages 149 and 201, includes the following acids:


Page 198 states that the aroma impact compounds, the chemicals that contribute to aroma and flavor, "originate" from some of these acids. I read this to mean that the acids interact with other chemicals during the roasting process to produce new flavor compounds. So, it doesn't look like the acids themselves produce actual flavor, per say. Then on page 201, there's a list of about 40 of these aromatic compounds, and their correlating flavors.

These charts are from the book "Espresso Coffee: The Chemistry of Quality" by Andrea Illy. The book is pretty dense, expensive, and a little dated, but it's one of the few coffee books that backs up it's claims with chemistry.

(I found a copy at my local library, so I can rent it whenever I want)

Espresso Coffee: The Science Of Quality

&gt; Written by leading coffee technology specialists in consultation with some of the world's biggest coffee manufacturers, the second edition of the successful Espresso Coffee will once again comprehensively cover the current status of the chemistry and technology of espresso coffee. It comprehensively covers topics such as agronomy, green coffee processing, roasting/grinding, packaging, percolating and decaffeination techniques. It provides a comprehensive resource for those interested in the fundamental notions of coffee quality; with a point of reference given in the form of a detailed bibliography to provide direction to the wider literature.