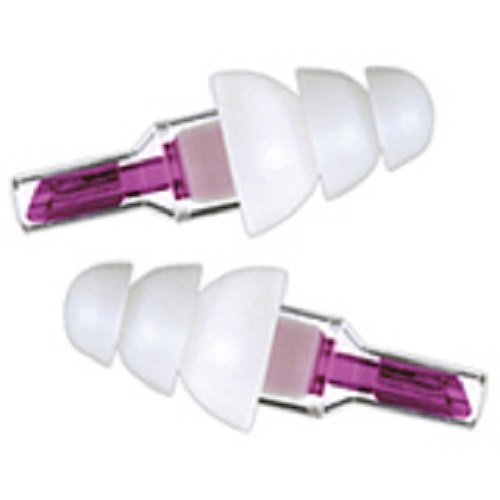 1 pair Large Fit ETY Plugs with white tips, neck cord, and carrying caseReplicates the natural response of the ear, so sound quality is the same as the original, only quieter. Music and speech are clear, not muffled.Reduces risk of hearing damage from loud noise such as concerts, theatres, airshows, parades, athletic and motorsports events.Enhances the music experience; Allows musicians to hear their own instrument and their blend with others.Not recommended for use with impulse noise, e.g., shooting sports. Not recommended for sleeping.Low cost, ready-fit hearing protection with cord and caseReplicates the ear's natural responseSound quality is preservedSpeech is clear, not muffledReduces sound approximately 20 decibels at all frequencies
Check price on Amazon

MY DUDE! Ear health is very important to me too. I use these bad boys. I take them out as I leave the show and it was like I wasn't even at a rock concert. If you put them in right, there is very little effect on the sound, just some minor high end roll-off. I don't think you can get much better unless you have custom fit plugs which are ridic expensive.

After drumming with foam plugs, these are like being reborn.

These work best for me, super easy to put in. Amazing sound quality, able to hear everything , and no ringing ears afterwards.

I have a pair of those for playing music. I'm a drummer in a rock band and I'd like to not have tinnitus when I'm 30 so I wear proper ear plugs. The kind Shamen talks about are great, I use that model right now and it turns down the volume of all sounds. It clips the brightest sounds like the overtones of cymbals (15kHz+) but otherwise it's pretty flat across the band. Guitar stores in your area should have similar products.

there exists a better version of these, where you get a molded plug that fits your ear perfectly, and I've heard that the filter in these plugs is amazing, it turns down the sound perfectly. They cost $150+ though.

important detail though: buy the Etymotic brand plugs if you decide to try them, not the rip-off grey plastic ones, they aren't anywhere near as good. I think these are the ones you're after.

The real issue is masking: your ability as a listener to distinguish one sound from another. Because the sound you are trying to hear (your friend's speech) is at a lower level than the noise (the music from the speaker), you have a poor signal to noise ratio. This makes it much more difficult to resolve the signal and hear your friend's speech. The fact that the speaker is between the two of you also makes this worse, because having two ears normally lets you spatially separate sources (improving the effective Signal-to-Noise ratio). However, because the sound is coming from the same angle, your brain can't get that extra boost from listening in only one direction.

In other news, if the sound was really so loud that you couldn't hear your friend, you were definitely suffering permanent hearing damage. I highly recommend wearing hearing protection in the future. These Etymotic earplugs have a flat frequency response, so they'll reduce the noise level without hurting the sound quality. In fact, because the hearing system goes non-linear at such high levels, it will actually make the music sound better because it won't be distorted (think of an overworked subwoofer "bottoming out"...you're doing that to your ears). As a side benefit, in my experience it's also easier to distinguish sounds in a noisy environment with the earplugs in, so you might have been able to hear your friend with them.

They're not the same as foam an you can get them for less than 30.

Rather than block the sound they rout it through small channels, reducing the volume with less distortion than regular earplugs.

They are comfortable and nice.. Haven't worn them at a show yet because I keep forgetting. Maybe this weekend

I have a pair from downbeats.com and they're awesome. Can still hear everything fine but saves your hearing. Do not get cheap disposable ones as it will block most of the sound.

Also heard good things about these on Amazon.ca

I highly recommend wearing earplugs. My favorite are Etymotic Research plugs. They still sound great when listening to music and don't just dampen all incoming audio. They're also pretty cheap, non-obtrusive, and hard for others to see.

Lets you still hear all the details in the sound while lowering the total dB.

I think this is a profound and interesting question and I'm going to look into it seriously. This may be related to my research interests, why aging makes it harder to ignore unwanted sounds. My suspicion is that you auditory brainstem/cortex is overrun by activation that can't be suppressed sufficiently. As you age, your ability to suppress activation degrades from the periphery all the way up to the cortex, so the effect you are talking about may be related.

Does anyone who knows more about this have any insight?

These come with me to every concert, I highly recommend them

Yep I'm just waiting until one day when it never stops... I have these earplugs that I wear to shows but when I'm DJing I feel as if it needs to be super loud and I need to hear all the details so I kind of rule earplugs out. I really need to start using them all the time.

Pick up a pair of these. They're only 8 bucks, and instead of muffling the sound like most earplugs, they just make it bearably quieter. Your ears will thank you.

Can anybody comment on these? Specifically the sizes and how well they work. They aren't too expensive but I'd like to not have to buy a second pair if the first is too small/large. I've noticed some ringing recently (not terrible, thankfully) and I'd like to try some good earplugs.

Eh, not really for weed. Anywhere else is likely to crush the joint. I put all in my joints into a bag and that into another bag. When I got in, I threw out the nasty bag and kept the clean one. It wasn't too bad.

Wear shorts and tank/t-shirt/whatever is comfortable. Accessories aside from what I listed are gum if you plan on taking MDMA (gum is a good ice breaker either way), something to make sure your valuables are kept safe (pockets, bags, etc. that you can seal) and maybe some kandi and glow toys, if you're into that.

I would highly recommend a pair of good earplugs. I was recommended these, which allow you to hear people talking within your vicinity. They were ~$15 shipped to Ontario (clear, large size).

They sell DD merchandise inside and other vendors have booths set up if you want to blow cash on novelties.

Lemme know if you have any other questions.

I've started carrying them with me when I'm going out to places like loud clubs. It makes being in loud environments so much more enjoyable AND you can actually understand people!

If you can, get these earplugs, I got them for the 2010 Canadian GP and they are awesome. Comfortable and they don't change the sound of things, just make it quieter.

Comes with a nice little case that I attached to my lanyard I had my tickets in.

...I'm no expert, but these have worked perfectly fine. (if you decide to go with them, make sure to pick the right size)

This one is very good. And they have different size, which is a plus for since I have big ears.
http://www.amazon.com/Etymotic-Research-ETY-Plugs-Protection-Earplugs/dp/B0044DEETC?ie=UTF8&amp;amp;psc=1&amp;amp;redirect=true&amp;amp;ref_=oh_aui_search_detailpage

I love my Etymotic ER-20s. They're designed to filter out all frequencies equally (and Etymotic has a stellar reputation for frequency response with their earphones) so you can still hear people talking well etc. They have a small size and a large size. The easiest place to get them from is Amazon (~$15) - small or large ... also in colours!.

Eatbuddies are similar but have a smaller profile (the ER-20s stick out of your ear a bit, though I don't mind and no one ever notices). They also seem to be a bit more expensive and don't publish a frequency chart like this one for the ER-20s, so I can't speak to the sound accuracy.

&gt;Glad you realize how real tinnitus is.

Like I said, it's all because of a Reddit thread I saw a few months ago. I didn't even know what tinnitus was before that, so I'm very glad I stumbled across that thread.

Thanks for the link. I'm using these and they do a pretty decent job of blocking frequencies in a balanced fashion but they're not perfect. Still much better than foam but I think I'll try the ones you linked as well.

These came highly recommended. Wear them to all the shows I go to and I have definitely experienced a sense of relief in the morning-after. No more ear ringing. No more pain.

Here's one of the most ridiculous kinds of racing ever sanctioned by the FIA.

I swear by these things. I use them fro concerts all the time. Can still hear clearly, at a reasonable volume, but blocks and protects from damaging levels.

I use these, and I have been fairly pleased. I like them because they cut down on wind and motor noise very significantly but don't really affect my ability to hear people talking or anything else that might be going on. I wear a full face helmet and I've never had any problems either putting on my helmet with these on or having the earplugs come off while riding.

Also note that they come in two sizes, I linked to the large one, I believe there is also a smaller blue version if you have a smaller ear canal.

gets the job done. quite well too for $9