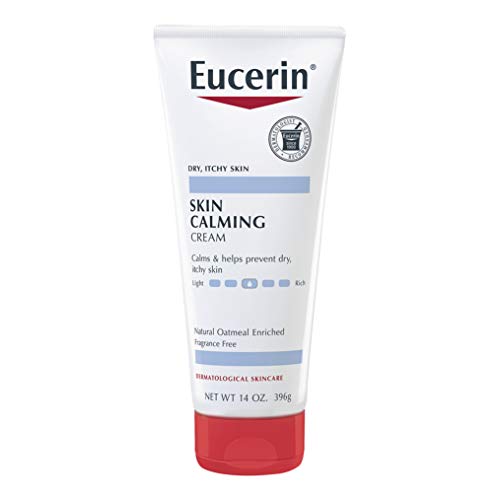 Sounds like having ezcema. My husband uses Eucerin for his dry skin.

There's one specifically for ezcema, but it's just dry skin, this works quite well.

I use Eucerin Skin Calming lotion. I think they may have changed their packaging recently to this but you can find it at any store CVS, Target ect. I works really fast and provide instant itch relief for me.

I have been itching so much during the 3rd trimester! I scratched my legs hard enough that my thighs were bruising. They checked my liver and bile via blood work twice, and there were no issues. Definitely bring it up at your appointment but it also just happens! I also recommend warm oatmeal baths and Eucerin cream and constantly reminding yourself that it won’t last forever 😂

Posted at the end is the data on the life-threating serious rash that can occur with this AED. It can be serious and if she's hypersensitive she might need to try a different medication.

It stands to reason the Lamictal and the itchiness are related. I have heard that some people are allergic to some of the ingredients in the generic medication but not in the brand name or visa versa.

We found using a chorine filter on the shower was helpful. Look Here You can buy at Lowes / Home Depot today! I would add that Yolo uses this Calming Cream religiously after her shower. Itchy skin can drive a person crazy and I hope you get to the bottom of it. If her doctors aren't listening make them or find someone who does...

Cases of life-threatening serious rashes, including Stevens-Johnson syndrome and toxic epidermal necrolysis, or rash-related death have been caused by lamotrigine. The rate of serious rash is greater in pediatric patients than in adults. Additional factors that may increase the risk of rash include: (1) coadministration with valproate; (2) exceeding recommended initial dose of lamotrigine, or (3) exceeding recommended dose escalation for lamotrigine. Benign rashes are also caused by lamotrigine; however, it is not possible to predict which rashes will prove to be serious or life-threatening. Lamotrigine should be discontinued at the first sign of rash unless the rash is clearly not drug-related.

Dermatologic
In adult patients (n=3348), serious rash associated with hospitalization and discontinuation was reported in 0.3% of patients in premarketing epilepsy trials. In bipolar trials, serious rash occurred in 0.08% of patients receiving this drug as initial monotherapy and 0.13% of patients receiving this drug as adjunctive therapy. In worldwide postmarketing experience, rash-related death has been reported, but the numbers are too few to permit a precise estimate of the rate.

Evidence has shown the inclusion of valproate in a multidrug regimen increases the risk of serious, potentially life-threatening rash in both adult and pediatric patients. In pediatric patients who used valproate concomitantly for epilepsy, 1.2% (6 of 482) experienced a serious rash (placebo=0.6%). In adults, 1% of patients receiving this drug in combination with valproate (n=584) experienced a rash (placebo=0.16%).[Ref]