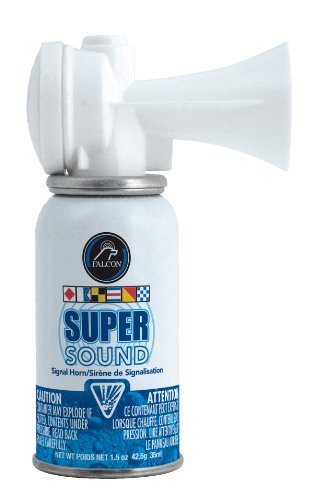 That would explain the fairly intense argument I saw Erin and Darin having at one point. Darin was great when ever I spoke with him btw! It was frustrating when Eric was an npc and didn't even know his own role/rules. He got tagged and was suppose to be stunned but kept moving, that doesn't inspire much confidence. I can understand the frustration by MSU players, now that you point that out, still some scary anger out there. I'll also not be attending NvZ Athens unless there is some changes coming.

I hate bitching without offering suggestions so here are some improvements I'd like to see be made next year.

Oh fuck that. Disconnect your doorbell and never answer the door.

Wait. Scratch that. If your kids are already awake, next time she comes, blast her with one of these!.

Actually, I need to order myself one now too.

I think you need one of these because being polite isn't working with him.
https://www.amazon.com/Falcon-Safety-Super-Sound-Horn/dp/B0000AXTVF/ref=sr_1_3?ie=UTF8&amp;amp;qid=1481757575&amp;amp;sr=8-3&amp;amp;keywords=Air+horn

&gt; A sincere and honest question: since the AT goes through black bear territory, would you carry a firearm on the AT (for those sections where it is legal)?

Probably not a firearm (but im from the UK so any firearm is alien) but i would seriously consider bear spray as its a light can that shouldn't affect the load.

At the very very least i'd carry a compressed air horn similar to this as it can be used to scare off wild animals, has no licensing need, and can be used to signal in an emergency. Like a laser pen its something that is incredibly useful for signalling that people don't think of.

As for maps/compass, everyone in the UK would take an OS map and compass (as well as gps if only via smartphone).

Considering how different a landscape can appear depending on weather conditions i'm just flabbergasted at the fact people in the US would even consider not taking a map.

Blast the dogs with a super loud air horn.

Life Pro Tip: Carry a small fog horn when out and about. They are very effective at putting distance between you and an aggressive dog. This has saved my life. I have this one. Way better than pepperspray which can miss the target or float back at you.

You might consider a handheld compressed air horn instead of the mace. You can fly with it.

And experience tells me making noise like this is going to deter just about anything you'll find in the Big Blue Room.