We found 1 Reddit comments about Forgotten Realms Adventures (Advanced Dungeons and Dragons Hardcover Accessory Rulebook). Here are the top ones, ranked by their Reddit score. 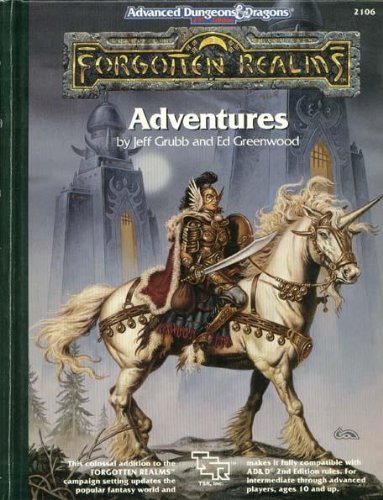 One of the best uses of this was in the old Forgotten Realms books, especially those for 2nd-edition AD&amp;D. They had a whole section in the FR hardcover book on alternate currencies and their effective values. It also had several pages of tables for coming up with gemstones, artistic objects, and non-gem stone as treasure.

(By 'non-gem stone' I mean things like marble. A half-ton block of marble might be incredibly unwieldy, but worth a nice chunk of coin to a sculptor.)

The coinage included cultural notes that gave some glimpses into various countries. Things like the 'bela', from when Sembia tried their hand at making paper currency. They printed too many and devalued it to the point where a 1-bela note is worth only 1 cp. Same goes for the steelpence, made as an alternative to gold but overproduced. It mentions the term "Buying steelpence with bela" meaning financial stupidity.

Waterdeep has an unusual-shaped coin made of electrum. It has very little value outside the city -- something like 2 sp -- but is worth something like 10 gp in the city. Cormyr's coins have notable kings stamped on them.

I think the book's worth using if you have a Realms game, regardless of edition. Here's the Amazon listing.