We found 4 Reddit comments about Friends, Voters, Countrymen. Here are the top ones, ranked by their Reddit score. 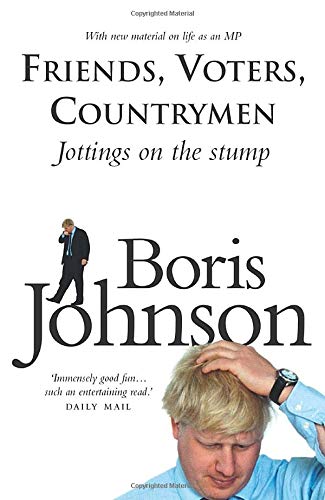 Saying that women wearing burkas are letterboxes and bank robbers was not in that article.

Evaluating the quality of 'hot totty' women who are voting Labour because of the 'fickleness of their sex' was not in that article.

Constantly talking about women as if they exist as sex items and nothing else happened many, many times before that article.

Thinking it's fine to call Olympic athletes "semi-naked, glistening like wet otters" was not in that article.

Saying that if gay marriage is okay, he sees no reason why three men and a dog should also be permitted to marry is in his very own book.

As foreign secretary, saying that Libya will have a bright future -"all we need to do is clear the dead bodies away", was not in that article.

Implying that Barack Obama's dislike of empires was due to his "Kenyan ancestry" was not in that article.

It is hard to find a time when Boris has not made an egregiously bigoted comment and gotten away with it - again.

Why does a quote from a book not make sense?

You want me to find you a copy of the book really?

https://www.amazon.co.uk/Friends-Voters-Countrymen-Boris-Johnson/dp/0007119143
less than 10 seconds that took.

Ohh wait let me guess you want me to provide you with a pdf link to the full book? No. It's Illegal, Do your own research and don't be lazy.

Johnson further wrote in his book 'Friends, Voters, Countrymen' (2001) that

&gt;The other day I was off for my run ... when I passed three youths. 'Oi' said one of them as I staggered by, 'it's that c*** Boris'. ... he had seen me on TV and formed the impression that I was a ****.
&gt;
&gt;... as I ran I tried to work out which TV programme it was that had been so offensive. I once went on Question Time and said that if gay marriage was OK - and I was uncertain on the issue - then I saw no reason in principle why a union should not be consecrated between three men, as well as two men; or indeed three men and a dog. What that the remark which cheesed them off?

Here I am inclined to squarely defend Boris. Only the last paragraph of this passage is usually quoted, but the full thing subtly changes the context. Firstly, consider characteristic 1. he does NOT opine that gay marriage is wrong - he explicitly says he is unsure, which is NOT code for "I disagree with it", which would not be precise. Secondly, only the potentially inflammatory parts of his argument are relevant to this passage - it cannot be assumed that he did not also address (or at least think about) the other side. Thirdly, exploring possible consequences is different to drawing conclusions. Boris probably feels like he should be able to do so without being judged. He is working through the issue and as part of that is considering arguments for and against. Oops Boris, no - you can't work through an issue in the court of public opinion - if you doubt, you are a homophobe!

Now let me be explicitly clear: not least as a bisexual male I could not be more in support of LGBTQ+ rights. It is difficult for me to understand why Boris could not see the simple fact that two adults in a relationship deserve to be treated the same, regardless of their gender. But I also understand that we all hold the views we do for idiosyncratic reasons that are not always transparent to others. I find it hugely commendable for somebody to honestly work through their views, and come to their own conclusions. And in fact, since the early 2000s, Boris has become fully in favour of LGBTQ+ rights, having a sterling voting record on LGBTQ+ issues, and now frequently making statements in support of LGBTQ+ rights (including in his first speech as PM). I am sure some cynics will say it is political opportunism. But I can't see any reason to rule out that he really has worked through this issue and changed his mind.

Let's take another example from earlier in his career - the infamous phone call between himself and Darius Guppy. The things he said on the phone were, at face value, clearly shocking. But on the other hand, listen to his hesitation and concern when he hears that the intention is to do harm to Collier. It is absolutely clear to me that if in this moment the 26-year-old Boris did harbour any fantastical excitement to be acting as a mafioso-esque eminence grise, it was being tempered with a desire to do the right thing. It also seems plausible that he may have been diplomatically holding the attention of his friend as a means of controlling the situation. Indeed, it seems that he ultimately did not follow through, as nothing came of the incident. As he later said, "people say all sorts of fantastical things while they’re talking to their friends.” This is a prime example of characteristic 3 - it's what you do, not what you say, that counts.

I couldn't possibly comment on every statement, gaffe or scandal that Boris has made through his career, and I certainly don't mean to cherry pick the ones that show him favourably. I am sure there are cases in which I could not commend his behaviour. But I hope this is enough to shine a light on why I believe that Boris is nonetheless misunderstood. Yes, he is no saint. Yes, he may be in some ways genuinely incompetent. Yes, he often says things that can be and are taken in the wrong way. But when you examine his personality, the way he was shaped through his education, you find that what really matters to him is getting to the bottom of things. At his core, he is a debater. A thinker. He strives to think things through and do the right thing, even if that sometimes comes out wrong. He is not a Trump.

I hope to God I'm not proved wrong.

&gt; The fact that he's representing the UK on an international level horrifies and embarrasses me.

Talking of which, how many of them have you read?

I don't think he need give much of a fuck about what you're "horrified and embarrassed" by to be honest.