We found 16 Reddit comments about Glock: The Rise of America's Gun. Here are the top ones, ranked by their Reddit score. 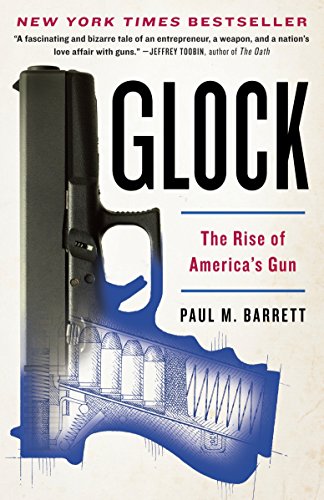 16 Reddit comments about Glock: The Rise of America's Gun:

This is a great book and you should read it if you get the chance.

NO tried to sue Glock in the 90s, blaming them for a surge in shootings in the city. Glock said that if they did they would bring up in court the one-for-one program and point at how most of the shootings were being done with Police trade-in .38s, and what did the NOPD think Glock was going to do with them? Sell for scrap value?

I'm not only pretty impressed with its specs and features on paper (will have to wait to see how it actually performs) but I'm honestly fine with the price: you're paying for the engineering, guys, very very little of what you pay for a gun goes into the cost of the materials for it so no, it doesn't really matter that it uses much less material than a G17 as regards the price, no that shouldn't really make a difference.

I mean do you really think that even a decent portion of what you pay for a G17, for example, goes towards the polymer and metal used to make it? Come on. I think I recall reading somewhere (believe it was that book on Glock by Paul Barrett) that the cost of materials to make a Glock 17 was around $70. When you buy a G17 you're getting about 70 bucks worth of plastic and steel, that's it...and about $500 worth of superb engineering to make sure it goes bang every time including and especially when it's your ass on the line, so quit bitching...

The only problem is that I've got a Kahr PM9 that has been just absolutely fantastic so I'm really going to have to work hard to find an excuse to buy this thing, though I probably will eventually.

Yes, but they can work pretty fast when they have to. Consider what happened when Smith &amp; Wesson introduced .40 S&amp;W ammunition, as retold by Paul M. Barrett in Glock: The Rise of America's Gun:

&gt; With bureaucratic sluggishness, the FBI had been deliberating for several years over which pistol and ammunition would replace the six-shot Smith &amp; Wesson. The agency at first decided to leapfrog existing gun models and ammo to equip its forces with a hard-hitting ten-millimeter pistol. “The Ten” would be a real “man-stopper,” FBI ballistics experts believed. Word of this inclination, which seeped out from Washington in 1988 and 1989, stimulated gun and ammunition makers to go large. Glock had readied the ten-millimeter Glock 20 for introduction at the SHOT Show, under the assumption that the FBI’s choice would influence tastes in wider law enforcement and commercial circles. By then, however, the FBI had discovered that conventional ten-millimeter ammunition—fired from a pistol about the same size as the traditional Colt .45 model that the military was phasing out—produced too much recoil for many agents to shoot accurately. The agency was beginning to recruit female personnel, and the women had even more trouble with the ten-millimeter. As an alternative, S&amp;W collaborated with Winchester to design a new, shorter cartridge of the same bore diameter, which could be fired from a slightly altered version of the nine-millimeter pistol. To distinguish the new product, and give the FBI its own distinctive load, the manufacturers called the ammunition the “.40 S&amp;W.” (Forty-caliber rounds are the same diameter as ten-millimeter rounds.)

&gt; Glock, with its ten-millimeter, seemed to have missed a subtle twist in handgun tastes. Obviously, Smith &amp; Wesson would come out with a pistol to match the .40 S&amp;W ammunition. With the FBI’s imprimatur, that combination would become the hot new handgun—or that, at least, was what everyone in the industry assumed.

&gt; Gaston Glock traveled from Vienna to Las Vegas to attend the SHOT Show that year. American wholesalers and retailers, to whom Karl Walter, the company’s top executive in the United States, introduced Glock, treated the Austrian engineer with respect bordering on awe. He was the hero of the plastic pistol controversy, the champion of greater police firepower.

&gt; For all his stature at the SHOT Show company booth, however, Gaston Glock wasn’t yet known on sight by most executives and marketing men in the American gun industry. He could stroll the exhibition floor without being noticed. Walter had told him about the .40 S&amp;W round. Glock decided to take a look for himself. He walked over to the Smith &amp; Wesson display area, scooped up samples of the .40 ammo, and put them in his pocket. Later he took measurements and made an important discovery. “Mr. Glock realized,” said Walter, “that with only very minor changes to the Glock 17, we could introduce a pistol to fire .40-caliber rounds, and we could steal this opportunity from Smith &amp; Wesson.”

&gt; Before S&amp;W could get its distribution wheels turning and put a .40 model on gun store shelves, Glock began shipping its own version: the .40-caliber Glock 22. By mid-1990, the new Glock pistol, which, to the layman’s eye, appeared virtually identical to the original Glock 17, was headed toward being a big hit in its own right.

&gt; “Oh, my God, what an embarrassment,” recalled Smith &amp; Wesson’s Sherry Collins. “We’re beaten to market on the gun for our own ammo, the round we’ve made especially for the FBI. And some Austrian gets there first!” Swirling a midday cocktail, Collins added: “The technical industry term for that kind of experience is ‘getting your ass kicked.’ ”

This really is a wonderful book, and anyone who owns, carries or enjoys talking about Glocks should have it.

"Gaston Glock enjoyed showing off the Glock 18, a fully automatic version of the pistol. Depressing the trigger of the Glock 18 unleashes a stream of bullets in the fashion of a machine gun. It can hold a capacious thirty-three-round magazine that sticks out of the gun’s grip and empties in a matter of seconds. Unless the user is familiar with the Glock 18, its enormous recoil results in the barrel jumping upward. Many an embarrassed police officer inadvertently peppered the ceiling of the company shooting range with rounds. Unavailable on the civilian market, the Glock 18 is designed for police SWAT squads and military special-ops units. Rolling it out for visitors to Smyrna remains a Glock marketing practice."

From Glock: The Rise of America's Gun

The Glock company has done a great job with their culture, image, and marketing. It might have something to do with the fact that many PDs use the Glock as their service weapon, so the officers buy Glocks as their off-duty weapon and word-of-mouth takes it from there. New gun buyers see that so many people have Glocks, so they assume it's a reliable/good gun to buy. I think there's an entire book written about Glock culture. - Edit: The book http://www.amazon.com/Glock-The-Rise-Americas-Gun/dp/0307719952

GL on your qualifying! Don't get "Glock thumb."

Much of this has been detailed in the book titled Glock - The Rise of America's Gun. It was a decent read and interesting look into Gaston's personal life. I had expected the book to highlight Gaston as a stand up man. My view of his firearms is far different than his character.

It is very interesting having read the book to see Helga Glock's lawsuit updated in the news.

That's all quite easy to google, or consider giving this book a read:

Still employs American workers - would you consider an M1 Garand to be an American gun? Downvote all you want but it is "Americas Gun"

Glock was good. The book, not the dude.

Correction to myself - it was originally his 17th patent, so previous things may have been non-guns, as /u/presidentender mentions.

I had originally read about this in Glock: Rise of America's Gun

Heres a good book on the rise of Glock in America.

The Gun by C.J. Chivers is another one I will always recommend.

A glock is a mechanical device, prone to failure just like any other mechanical device, made of metal, polymer and springs. I've owned a g19, g17 and a g26, still have the g17. I used to shoot IPSC with my 17, and carried my g26 concealed for about a year.

My observation was it had the same failure rate as any other handgun. Nothing special about glocks except their marketing..

I dont understand what verbal diarrhea is. I used complete sentences.

boring mil search What I had to use on my 11 year old dell inspirion as a piece of meat intern working on navy projects. Treasure trove of documents if you want to actually understand what I mean by testing procedure.

You can also use everyspec.com, which is a lot less disgusting-looking.

A lot of it is redundant and poorly specified, but in the few years I worked under master gunsmiths and factory armorers, industry just did not have that daily level of rigor. There is no reason for them to change, except for the ISO cert requirements.

This fairly recent book Is where I learned a lot about Gaston, and it also reaffirmed my cynicism for the firearms industry. It is ironic, because the fanboy tunnel vision that he smashed through and flipped on his head is the same thing that keeps Glock's marketing on point. Its also just a really good read for so many reasons. I seriously recommend it.

You are better served getting a real technical viewpoint from a real old armor/gunsmith who has a good experience with handguns. But the book still gives a lot of deep information into the evolution of the first handguns in the early 80's to today.

Gen 1's are rare as hell, and outside of a museum or wealthy collector, the next best place is a gunsmith shop.