We found 9 Reddit comments about Gulpy Water Dispenser for Pet, 20-Ounce(Colors may vary). Here are the top ones, ranked by their Reddit score. 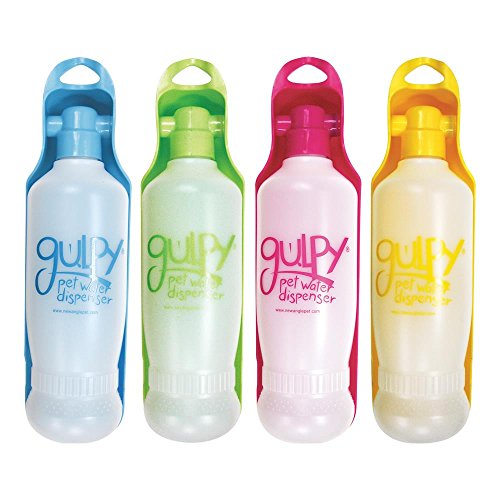 Will also accept standard water bottlesConvenient belt clip on backJust flip to open -- flip to closeShips in one of assorted colors (yellow, green, blue or orange)
Check price on Amazon

Rest stop dog areas are hot spots of animal and people waste as well as broken glass so watch your step. I also recommend packing a lunch and using the benches if the weather allows because it gives both of you time out of the car. Another recommendation is the gulpy bottle or something similar because it's easy to fill and store in a car.Gulpy bottle

The one thing that came as a real surprise happened after the trip. My puppy was great and slept the whole time during the trip. Cut to 3 am and she is wide awake and ready to play while I'm exhausted after driving 10 hours. Now, Dramamine might prevent a 3 am wake up due to extra drowsiness, but be prepared for extra energy after the trip.

Do you have a "go pee" or "go poo" command for him at home? My dog always pees on command to "do it!" - it's awesome. If you're not doing something like that already, I'd start working on it at home. Once he gets the hang of it, try using it while you're out (with lots of praise and treats!)

As for the water - yep, that probably is a bigger concern. What type of water "dispenser" do you have for him when you're out? His own water bowl? A "people" water bottle? One of those collapsible ones? A gulpy? You may need to try a few different options so see what he likes best.

I find when by dog is really excited, I have a harder time getting her to drink water. If there are other dogs around, I'll usually take her to a quiet place and try to get her in a calmer state of mind, and then she's more likely to drink.

You're probably going to want some grooming supplies, a good brush at the very least. Some nail clippers if you plan to do that yourself, otherwise you'll likely need to budget for seeing a groomer somewhat regularly. Along these lines, a teeth-cleaning method is a good idea too - if you're able and willing to get him used to having his teeth brushed a few times a week, this will be fantastic for keeping his mouth healthy long-term.

CANNOT say enough good things about those little poop bag dispensers and rolls of poop bags. I thought they were a silly purchase at first, finally broke down and grabbed one a month or two later, and it's the best. So convenient to just clip that thing to the leash, my belt loop, backpack, whatever. I buy big boxes of the refill rolls and also keep one in my car, and one in my purse, so I'm always prepared to deal with any surprise poops. They're nice and compact so don't take up much space compared to reusing old bags, I've found.

Unlike the other commenters I highly prefer to use a basic collar for walks, dog park, and general day to day use. I only use harnesses for hiking, running, that kind of thing. But regardless, something like that is necessary. You also may want to add a personalized tag with your name and phone number in case the dog ever goes missing, a person finding him could call you directly instead of going through the whole animal control/microchip scan at vet/etc. process. Don't put too much information on this (for safety's sake) - a method of contacting you is really all that's necessary. No address or anything like that.

Lastly, if you live anywhere that has skunks (so anywhere in North America) I would highly recommend having a bottle of Nature's Miracle skunk odor remover on hand at all times. You never know when one of those little buggers might appear. A few weeks ago I had to deal with Sunny getting skunked in the backyard at 12:30 AM and I had nothing on hand, it was a week of hell. Cali got hit a week later and having some of that around made things considerably easier (it works a lot better if you can use it right after they've been sprayed, before washing at all).

Those would be the "essentials" I'd add to your list. If you like doing more than just going for regular walks or to a dog park, like hiking, running, etc. (I'm assuming you do if you're getting an ACD, you pretty much have to with that breed) I really like using a hands-free leash. There's lots of different ones on the market, the combo I personally use is this Kurgo belt, I generally keep another roll of poop bags and a collapsible food/water dish in the pocket on that, and this Canine Equipment leash. I really like how versatile that leash is. It can be used as tie out, I can easily unclip it from my belt and hand off to a friend or whatever (it has handles sewn in as well), or use it to attach both dogs to the belt. Leash can also be used hands free without a belt if you so choose.

I also think a form of giving water on the go is pretty important for long outings, even just going to the dog park I usually take water because Sunny plays hard and runs a lot. As I already mentioned, you can get various forms of collapsible dishes for food and water, I have one of these but I'd say just look around and pick whatever suits you, if that's something you want. I only like those for longer hikes and stuff, when we actually stop and take breaks. For stuff like the dog park I have a Gulpy which works pretty well. I've also seen people just use a sport cap water bottle that their dog drinks from while they squeeze, kind of like a hamster bottle, but that kind of depends on your dog - YMMV.

I am glad that you enjoyed it. :) I am even more glad to hear that you are are active enough with your dog to have run into this problem, too. We found it during our first big mountain bike ride together, on an 85F evening. That last 2.5 miles was slow, and a bit miserable after we ran out of water in the middle of a drought season.

Our biggest challenge is water in the summertime. In drought years many creeks run dry, and some of the running ones get infected with Giardia from cattle ranching on Federal land upstream. This means that I often must carry all the water we will need. At the peak of the summer she can go through 2.2L (74oz) on a 12 mile ride. I can cover that between two 20oz Gulpy dispensers, and a couple of refills from my own 3L hydration reservoir, but when I used to ride solo I never filled that thing up more than half way, and water is heavy. ;-) I recently purchased a swamp cooler type vest for her, in the hopes that it cuts back on her overall water intake during the warm months. I can also use the leftovers from her water bottle dispenser to wet it at each stop.

However, I get a break in the wintertime. She just eats snow as she goes, as she needs it. I read up on this, and it is not harmful to their mouth the way it is to ours, and is commonly how dogs in the wild, and wolves, get the bulk of their moisture all winter long. I do not need as much water, either, as I am dressing light enough to not sweat, and usually get by with just a 1L collapsible in my cargo pocket.

Price and coupons were a major factor for me in my choice, but I was leaning towards Pupbox simply because they factor in age and breed when choosing toys and overall seemed tailored more towards a first-time owner: if you already have bits and bobs floating around from another family dog, it'll probably loose it's appeal.

The training materials weren't all that helpful (it was generally well thought out, but not as timely as they intended it to be imo) but the toys and "extras" like a Gulpy - something I wouldn't have thought to buy but now use all the time - were definitely nice!

I won this exact bottle in a dog gift basket and it's complete plastic knockoff trash. Great gift in concept for a dog owner, but get the original, the Gulpy. The second image in the OP link is even stolen from Gulpy, so consider that an endorsement.

I do a lot of camping/with my pups.

Depending on what area you're in / if your pups are on anything for ticks, you should probably being a tick remover - something simple like this. If your dog does get a tick, KEEP THE TICK so you can get it tested for Lyme .. (this only really applies if the tick is attached to the dog for 24h+, so make sure to keep checking your dog for ticks).

For hydration, get a collapsible water bowl or a Guply - they make keeping your dog hyrdated super easy.

Depending on weather, you may want to get a sleeping bag for your dog. Ruffwear makes dog sleeping bags, but I'm cheap so I just bought a cheap kids sleeping bag which works fine for my dogs.

Lastly, I had a dog growing up who would get carsick. We just gave him gravol and he was fine (I'm not sure of the dosage, maybe someone else can help me out here).

The basics (food, leash, collar, dishes, crate) will probably already be taken care of. I'd focus on training and positive dog-kid interaction, because it will set the stage for their relationship. If they're working together then it's easier to commit long term and be responsible, because it's enjoyable.

I guess it depends how much money are you looking to spend.

In the upper ranges, you could pay for a puppy kindergarten class (great for socialization, great for everyone involved).

Or maybe, a manners minder, a very effective training tool.

In the less expensive categories,

What about puzzle toys? They'll keep the puppy mentally stimulated, keep him quiet(er) when left alone, and give your family some peaceful breaks from the chaos. People need to destress too, in order to interact with dogs successfully.

in addition, this is great for walks when it's warm out, i bring it on summer hikes all the time or just walks around the neighborhood in the summer: amazon.com/Gulpy-Water-Dispenser-20-Ounce-Colors/dp/B000TG7YRM/ref=sr_1_3?keywords=gulpy&amp;qid=1565902675&amp;s=pet-supplies&amp;sr=1-3