We found 10 Reddit comments about Hands Are Not for Hitting (Board Book) (Best Behavior Series). Here are the top ones, ranked by their Reddit score. 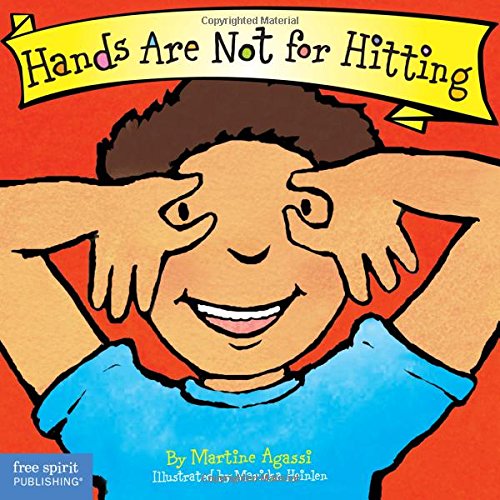 10 Reddit comments about Hands Are Not for Hitting (Board Book) (Best Behavior Series):

&gt;As always, we talked about what to do when angry, how it's okay to say "I'm angry!" yell it even, but it's never okay to hit, throw shoes, bite, kick. I have this conversation with him at least twice a day. But he actually does that (says I'm angry instead of violence) maybe once a month.

Sounds like you're doing all the right things, but I think that's pretty normal for a 3yo - it takes a lot of self-control to be able to use words instead of acting on your anger! Have you tried talking about how to appropriately handle anger at times when he's not angry? Maybe reading some books that show appropriate expression of anger? I'll copy/paste what I wrote in a recent thread about similar issues...

&gt;It might help to read some books that model appropriate ways to handle anger. Definitely check out Anh's Anger and its sequel, Steps and Stones. Sometimes I'm Bombaloo is a good one too and very relatable for a 3yo, though less focused on specific solutions. When I Feel Angry is more of a "what to do" book than a story; Cool Down and Work Through Anger is similar but aimed at slightly older kids. Little Monkey Calms Down is a very simple little book with some great ideas too. For hitting specifically, you might check out Hands Are Not For Hitting or Little Dinos Don't Hit. And lastly, Moody Cow Meditates is a great story which also features the "calming jar", a fun tool you can try with him - this site has instructions for making one and lots of variations on that theme. The idea is you shake up the jar to get all your anger out and visualize all those swirling feelings, and then you sit quietly and watch until all the glitter settles and you feel calmer again.

&gt;Read through some books and talk about these things at times when he's calm, so then when he says I'm so frustrated!!! you can say, Okay, what are some things we can do when we're frustrated? Do you want to go for a walk like Anh? Do you want to shake your calm-down jar like Moody Cow? etc. Help him fill his "toolbox" of appropriate ways to handle anger, and keep reminding him of those tools when things are starting to escalate. Model them yourself as well - "I'm starting to get frustrated that we're stuck in so much traffic, so I'm going to take some deep breaths like Little Monkey to help me feel calmer. Do you want to breathe with me?"

&gt;Emphasize that all feelings are okay, what matters is how we act on them; if he chooses an inappropriate way to express his anger (hitting, yelling, etc) just remind him, hurting other people/yelling at other people is not an okay way to deal with our frustration; and help him make a better choice (even if that means a time-out). Over time he'll become more able to exercise some control over his behavior and start using his "tools" more often.

Does your kid like books? We had great success with this book. Hands Are Not for Hitting (Board Book) (Best Behavior Series) https://www.amazon.com/dp/157542200X/ref=cm_sw_r_cp_api_B889yb6WN64QW

We would read it and talk about all the fun things hands were for and if he did hit me I would remind him hands are not for hitting and he would say sorry, if he hit again after i reminded him then i did timeout followed by us reading the book. We also used feet are not for kicking and paci is not forever which all worked great with him. He still asks to read them regularly. We used the feet one around 18 mths and the hands at 2 yrs old, he is now 2.5.

This has been working for us: Hands Are Not for Hitting (Board Book) (Best Behavior Series) https://www.amazon.com/dp/157542200X/ref=cm_sw_r_cp_apa_i_2nkkDbFCW8TTX

My daughter was unfortunately a hitter as well. After trying time out and other methods, we tried a book. It's call [Hands Are Not for Hitting] (http://www.amazon.com/Hands-Hitting-Board-Behavior-Series/dp/157542200X/ref=sr_1_1?ie=UTF8&amp;amp;qid=1394044206&amp;amp;sr=8-1&amp;amp;keywords=hands+are+not+for+hitting) and anytime she would hit, we would sit her down and read that book with her. Sometimes it entailed calming her down and then reading the book, but we were very adamant on doing it every time. We had one at her sitter's house and one at our house. We also read it during her night time reading just for good measure.

Some methods work for certain kids and some don't, but that's what ultimately worked for us.

We recently bought Hands are Not for Hitting for our toddler. It helped. She's not perfect, but it has reduced the hitting incidents.

Hands Are Not for Hitting

I had an issue with that in my preschool class. Typically reinforcing using words should work but have you also tried to figure out the emotion behind the aggressive behavior?

It does take some time to stop the behavior as we are teaching our children how to deal with their emotions. Many times they hit, kick, and grab because they don't know how to deal with anger, hurt, or sadness. I like to ask why they hit and I explain why it isn't appropriate. I always say to the kids to tell their friend, "No thank you, I don't like that." Although I was having to repeat this A LOT, it was amazing to hear kids begin using this phrase instead of immediately reacting with aggressive behavior.

When we were having a particularly difficult time with one child, it was brought to the mother's attention who then brought a book to share with the class. You may have heard of it. It's called Hands are not for Hitting.

I'm not sure how well the book works for children. From a child development standpoint, it's best to help the child acknowledge what they are feeling and provide them with tools (words) for how to deal with it or express themselves in a positive manner.

Hands Are Not for Hitting (Board Book) (Best Behavior Series) https://www.amazon.com/dp/157542200X/ref=cm_sw_r_cp_api_i_WBhYCbAEPA4ZB

I’ve got boy/girl twin toddlers too! You’re gonna want to get all these books... hitting, kicking, sharing...

If he’s just excited and needs to let out energy I redirect him to clap or high five and I meet him at the energy level he wants. If he’s angry, we make sure he know hitting hurts sister and that we need to use gentle hands.

You basically do this on repeat and one day it’ll kinda click. He is almost 2 and still gets aggressive at times but we have a way to diffuse it quickly.

Good luck! Do they hug and kiss yet? That sorta makes it all worthwhile.

We were having an issue with our 2.5 year old hitting at Daycare. We bought the Hands Are Not For Hitting book and read it every night. Maybe you could buy Teeth Are Not For Biting and read that? Or get one for Daycare and ask them to read it to him at every instance of biting.