We found 3 Reddit comments about Hatred's Kingdom: How Saudi Arabia Supports the New Global Terrorism. Here are the top ones, ranked by their Reddit score. 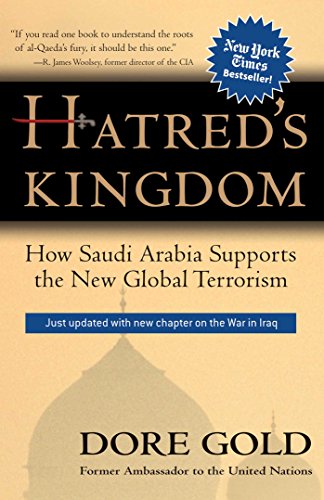 This is wrong on multiple levels, built the most galling one is that somehow you're suggesting that radical Islam is a direct result of Western involvement in Muslim countries.

That's incomplete at best and dangerously ignorant at worst.

First off, some of the biggest state sponsors of terrorism are allies with the US (re Saudi Arabia, Pakistan, the UAE) and have experienced fuck all in terms of bombing and aggression. There's a lot of money to be made in warfare and chaos.

Also, the main cause of radical Islam is the religion itself above all else. You're insane if you think otherwise. This isn't a bunch of ragtag fighters battling imperialism and defending their innocent families from Western bullies. These are bloodthirsty scumbags who cross borders and slaughter civilians in an effort to spread their monstrous ideology and attain power.

And finally, if the West is so oppressive, corruptive, and murderous why do so many Islamic governments cry out when we threaten to cut off revenue streams and support?

EDIT: Here are some suggestions:

Time to read a book.

Lets also not forget when Hillary was caught saying how Saudi Arabia and Qatar covertly support ISIS, courtesy of wikileaks.

&gt;“We need to use our diplomatic and more traditional intelligence assets to bring pressure on the governments of Qatar and Saudi Arabia, which are providing clandestine financial and logistic support to Isis and other radical groups in the region.”
---

Your first source literally says that they are fighting each other but both focusing on smaller groups, which isnt surprising considering the sectarian nature of the war.

Would you like to explain why ISIS and Assad forces have been fighting over Palmyra for over a year now?


Your second source is a Saudi owned hit piece. As already established, Saudi Arabia has deep invested interests in the region, has supported salafi-Wahabbi extremists in the past, and is a country who even Americas top politicans know support these groups, but STILL give them massive arm deals!


Do you bother to follow the war closely? There is a massive amount of propaganda floating around, and you fell for it.

&gt; and spread the Islamist, reactionary-theological interpretation of Sunni Islam in which they believe as far as they can, by force.

You know, the country that made Hamas what it is today just to spite Arafat and the PLO for siding with Saddam in 1991.

And don't take my word for it, take Dore Gold's:

On a scale of autism to normal, this argument is cerebral palsy


Or how about we talk about 2 of the CIA's former vetted rebel groups are now in a coalition with al Qa'ida (Zenki and Izza). Or does that not constitute spreading reactionary Islam?