We found 6 Reddit comments about Health o Meter Grow with Me 2 in 1 Baby to Toddler Scale with Growth Chart Book. Here are the top ones, ranked by their Reddit score. 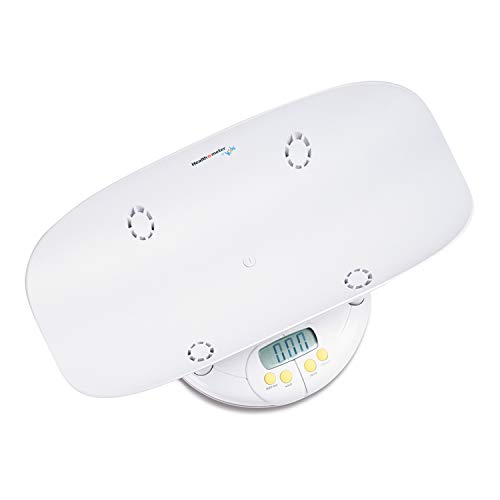 Health o meter's baby scale precisely measures the weight of your newborn within 0.5 ounces (or 0.1 kilograms); This accurate measurement lets you monitor your child’s growth in between doctor visitsThe infant tray comes equipped with a security lock for added stability during use, while the HOLD feature captures the precise weight measurement of an active baby; once your baby outgrows the tray, the scale converts to a toddler scale with a capacity of Upto 60 poundsThe scale’s large LCD digital display makes it easy to readIncludes a healthy growth baby book for tracking the weight and height of your child, height and weight national averages from birth to 36 months, plus a tooth tracker and toddler shoe size chart10 year limited warranty; Requires a 9 volt battery (not included), works well and long with Polaroid 9V batteries
Check price on Amazon

6 Reddit comments about Health o Meter Grow with Me 2 in 1 Baby to Toddler Scale with Growth Chart Book:

I figured the 27 ounces was coming from some sort of calculation based on weight or age. My point is that because he's not spitting up as much, he might be keeping more down, even if the total volume you're giving him is less.

You can also try offering the bottle if he seems fussy. If he's not hungry, he probably won't eat much, if at all.

As far as increasing - if he's handling 2 oz at a time, try 2.5 or 2.25. You can premake formula, so have some on hand and if he finishes a bottle and is keeping it down, offer a little bit more, in 1/4 or 1/2 oz increments. See what his current threshold is. And expect that it will change based on what's currently in his stomach and other variables you might not know.

Reflux meds can help - my daughter was on prilosec. Although that was a nightmare to get into her once she was off the feeding tube. You'd need your pediatrician to prescribe it though. A feeding log showing how much you're giving him and how much he's throwing up (try dumping a pre-measured amount of formula onto a towel or something so you have an idea of what, for instance, an oz looks like).

The other thing we did was add a thickener to her formula. I can't remember the exact brand we used, but you might ask your pediatrician about that also. That really helped.

Try to remember that if he was breastfed, you wouldn't be able to monitor how much he was eating. And treat the formula feeding the same instead of obsessing about the amount he's eating. With breastfed babies, you check that they're producing enough wet diapers and gaining weight. Short term (daily), if he has enough wet diapers for his age (4-5 really wet), he's not dehydrated. Longer term (weekly), weigh him.

You haven't mentioned if he's lost weight or fallen in the percentiles. Since you are concerned with his intake amount, weigh him regularly (at the pediatrician's or on a scale at home that measures to half an oz) to make sure he's not losing weight.

You mention wanting someone to watch you feed him. Honestly, it doesn't sound like you are doing anything wrong except getting stressed. And that's not wrong, just not helpful. Many babies have reflux and throw up a lot and still gain weight just fine.

BTW, this is the scale we used to weigh our reflux baby. Don't compare to the pediatrician's scale - just take one weight as soon as you have the scale, then one a week later, etc. It's the change that's important. http://www.amazon.com/Health-meter-Toddler-Scale-Growth/dp/B0009MFUZE/ref=sr_1_1?ie=UTF8&amp;amp;qid=1453574636&amp;amp;sr=8-1&amp;amp;keywords=baby+scale

So here's the one that we have - it's digital and can be used until the baby's a toddler (you just take the tray away and it becomes a normal scale that your bub can step on!) ;)

My LO didn't get back to his birth weight until nearly a month. He gained 2 oz in 2 days so the ped thought he was fine, but mother's intuition made me bring him in for a weight check two weeks later. He'd only gained another 3 oz. I was not about to let that happen again so I bought a scale for my piece of mind. He's gaining great at 5 mo. now so I only use it when I'm curious what he weighs - maybe every other week. I don't obsess over it, but I'm glad I have it.

I haven't checked it's accuracy to the scale at the doctor's office, but it does the job.

Mine was doing that around that age and it turned out she was not getting much at all, which we didn’t realize until her weight gain stalled out. She’s an ineffective nurser and would frequently fall asleep at the breast. In fact, the amount that you are pumping may indicate that she is failing to empty the breast, especially if you are getting that much right after a nursing session, and the fact that she ate 5 oz from a bottle right after nursing is also suspicious.

Definitely do some weighted feedings and you’ll have a better idea of what is going on. I tried a kitchen scale initially as well but it was almost impossible to get a good reading on it. I ended up buying this scale instead and it has been great.

We got this one a couple months in when we were worried about our daughter gaining weight: https://www.amazon.com/dp/B0009MFUZE/ref=cm_sw_r_cp_api_i_kLj1Db2MSJ3F1

It worked great, and I’m happy to have it again for my new LO coming in January! Don’t use it obsessively, but weighing them every few days or week can really ease your mind about your baby gaining enough weight (or tip you off as to potential weight gain problems!).