We found 15 Reddit comments about How the States Got Their Shapes. Here are the top ones, ranked by their Reddit score. 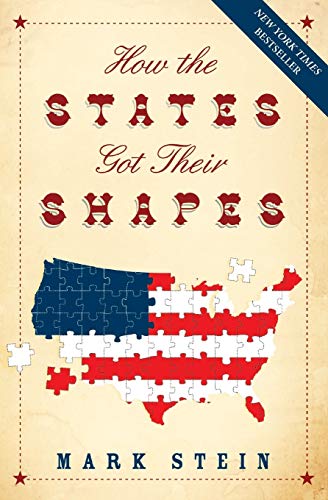 15 Reddit comments about How the States Got Their Shapes:

How States Got Their Shapes

Mark Stein's How the States Got Their Shapes is a nice quick-and-dirty rundown of how each state came to be the shape it is today. It's just a fun little pop-history book, though. You won't find much in the way of deep, well-sourced historical analysis in it.

There's also a History Channel show, based on Stein's book and hosted by Mark Unger. It's OK.

The individual States weren't formed because the country needed them, but rather because their constituent populations wanted representation in the Federal Government. (Some exception might be made for California, but the story of how it obtained statehood is the exception rather than the rule). There are also a few outliers, such as Vermont and West Virginia, which were formed for complex political reasons; none of these, though, were created out of political necessity.

You might want to check out this book; a lot of it is simple geography, but it also gives brief overviews of each state's origins.

This is a bit higher level than the grids, but worth reading all the same: How the States Got Their Shapes

Massachusetts had deeded lands in Wrentham, Millville, and Blackstone. Founded on tolerance and understanding, Rhode Island accommodated Massachusetts' claims and allowed its northern border to dip southwest. Being more traditionally Puritan like its neighbor Massachusetts, Connecticut insisted on a more level northern border that occasionally allowed a few notches. (Source)

There was a companion book.

The show basically ran out of subject matter once they finished the book.

The rich land owner in Missouri got that addition to the map, as he didn't want his property split between two states. Which, is probably not an unreasonable request.

As for the answer to the Oklahoma panhandle its here.

Well worth reading: How The States Got Their Shapes

At lot of people mentioned some pretty cool map books already, but these are two geography-related books I'm getting for Christmas: How the States Got Their Shapes (probably better if she's American) and Guns, Germs, and Steel. The latter is less to do with maps and more to do with how geography influences civilizations. Hope that helps!

Clearly you never heard of the "if it ain't broke, don't fix it" paradigm.

Also, if you're serious, there's a very good book called "How the States got their Shapes" you should read.

A lot of people mentioned the show, but there is an excellent book that I read a few years on the topic.

It goes quite a bit more into depth than the TV show does with a chapter for each state. There are some really interesting stories about how various borders got there, especially in the Eastern States, where you had a mix of overlapping colonial charters.

Check out the book How the States Got Their Shapes and the follow up The People Behind the Borderlines, both great reads by Mark Stein.

The Book by Mark Stein is one of the most fascinating books I've ever read.

Huh. Very good! Also - if you guys are interested in this /u/tacitus's reply, you might like the book How The States Got Their Shapes I read it a few years ago. Pretty great.

Not entirely on topic, but... after the Revolutionary War, a lot of states voluntarily gave up their westward colonial claims. The colonies of Georgia, North Carolina and Virginia once went all the way to the Mississippi River (map). "Georgia" once included almost all of present-day states of Alabama and Mississippi. But people up north (especially abolitionists) became worried that such "mega-states" would one day dominate US politics. Thus, there came a general consensus that "new" states (those founded after 1802, or thereabouts) should all be (roughly) the same size. There are exceptions - Texas, of course, came about through conquest. And local geography came into play several times. Utah has that odd "notch" in its northeast corner because of the Uinta Mountains: it was thought that settlers in the area would be better served by being part of Wyoming, instead of the Utah government figuring out how to build telegraph wires and government buildings on the other side of the mountains.

There's a book (and a documentary TV series based on the book) called How the States Got Their Shapes. I found the book to be tedious and poorly written, which is sad, given how interesting the subject matter actually is. For example, each state is one chapter, and each chapter has sections about their northern, southern, eastern and western borders. He might spend a lot of time talking about how Georgia got its western border with Alabama, for instance. But then, in the chapter on Alabama, he'd almost copy-and-paste the bits from the Georgia chapter to talk about Alabama's eastern border. I mean, I don't know how else you'd actually write something like that, but the way he wrote it isn't it. There normally wasn't even any context, like how Georgia and Alabama might have disagreed on the subject... just copy, paste and condense it down a bit.

Biggest thing is to keep the regional culture in mind. I would suggest doing some research and reading up on local history in the area you are thinking about building in to get a feel for the kind of people who settled it. Another good source would be How the States Got Their Shapes by Mark Stein. Maybe you could piece together some what-if scenarios from the surrounding states so it's rooted in reality?