Reddit reviews How the West Grew Rich: The Economic Transformation Of The Industrial World

We found 2 Reddit comments about How the West Grew Rich: The Economic Transformation Of The Industrial World. Here are the top ones, ranked by their Reddit score. 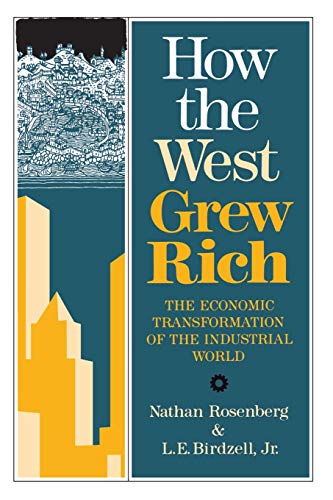 2 Reddit comments about How the West Grew Rich: The Economic Transformation Of The Industrial World:

&gt;They are most certainly violent by proxy of the state. If you think anything else than military and economic imperialism keeps the U.S. economically competitive, you must not be aware that every President always says the phrase "protecting/furthering U.S. interests", which is newspeak for "getting resources and opening new markets with guns."

Right, which is my whole point. Without the state to do their bidding, they couldn't get away with most of the stuff they do now. That's not to say I'm in favor of abolishing the state, however, there are many good explanations and breakdowns on how a stateless society would work with polycentric law, but that's besides the point.

When the state is minimal and upholds the law equally, with real punishments given out to corporations, instead of handslaps and ridiculously minimal fines, you will see a large incentive to stop breaking those laws.

&gt;Sure. But financial deregulation were direct causes of the 1929 and 2008 crashes. Other kinds of deregulation might not have the same effects.

Absolutely not, and just to keep this brief, I won't go into details, but incentives and disincentives play such a huge role in these things, and what you had was a myriad of ways the government incentivized these institutions to lie, bend the rules and even cheat.

&gt;Source? It's not because something is "pretty well known" that it's true. Because I believe that private enterprise spurring innovation is just a capitalist talking point overblown to mythical status, just like self-made men. I'm not saying there is no innovation in private companies, I'm saying private property not needed for great innovation. A lot of the important innovation of the last 50 years are due to MIT, NASA and the military. In order words, publically funded.

Here are some examples.

And here's some examples from those sources.

"Because innovation relies on the willingness and ability to question the established ways of doing things, innovation flourishes in economies where openness, clearly defined property rights, and established rule of law make it easy to start new enterprises"

"Entrepreneurs willing to risk and capable of innovating and raising productivity are rewarded by profit, which has proven to be a particularly strong positive incentive for innovation.

Equally strong is the negative incentive created in a competitive market by the threat of failure hanging over any business that does not keep up with (or lead) the technological developments in its industry."

&gt;there is no fucking way private enterprise in those fields would ever improve standard of living for us, guaranteed. Everytime someone even thinks of introducing private clinics they are immediatly asked to look south of the border and then fuck off.

It must be increasing the standard of living for you, as Canada has 27% of their healthcare privatized. These private healthcare schemes help to cover what the public healthcare system doesn't, so if there were no need for them, why would they exist?

&gt;Other common myth. Have you heard of the Spanish Revolution? Orwell went there as a journalist and was so impressed by the regime that he enrolled and fought in the revolution. I'd argue these communities did institute the policies correctly. There was no report of corruption. They were unfortunately crushed by Franco and the fascists, whom were funded both by Hitler and Communist Russia, because the anarchist model was seen as a threat to both regimes.

You mean the Spanish Revolution where anarchists forced the people into their system against their will? The one where payments made to landlords and other private entities previously, now went to the "committees"?

How is replacing one coercive system with a different one progress?

From your own wiki

"Even if the peasant proprietor and tenant farmer were not compelled to adhere to the collective system, there were several factors that made life difficult for recalcitrants; for not only were they prevented from employing hired labor and disposing freely as their crops, as has already been seen, but they were often denied all benefits enjoyed by members...Moreover, the tenant farmer, who had believed himself freed from the payment of rent by the execution or flight of the landowner or of his steward, was often compelled to continue such payment to the village committee. All these factors combined to exert a pressure almost as powerful as the butt of the rifle, and eventually forced the small owners and tenant farmers in many villages to relinquish their land and other possessions to the collective farms."

I'll give you one of each to get you started, then you're on your own: