Reddit reviews How to Brew: Everything you need to know to brew beer right the first time

We found 11 Reddit comments about How to Brew: Everything you need to know to brew beer right the first time. Here are the top ones, ranked by their Reddit score. 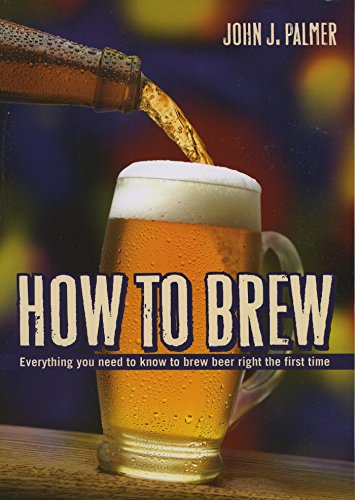 11 Reddit comments about How to Brew: Everything you need to know to brew beer right the first time:

My fiance started brewing with a 1 gallon kit from Brooklyn Brew Shop. He liked their kits since they're all-grain and don't use extracts. The instructions are easy to follow, and there are some free videos available online as well. The beers he's made with the kits (I believe he's used four so far) have been pretty good, despite a few "user errors." (Trouble with filtration for one, accidental over-carbonation for another.) Mind you, the kit DOES NOT include bottles, caps, a capper, or the various pots/strainers/funnels you tend to need for brewing. You can purchase these items separately from Brooklyn Brew Shop's site, or poke around on Amazon.

Northern Brewer also sells a nice 1-gallon starter kit (it includes a capper, caps, and an auto-siphon for bottling, but doesn't have a thermometer like Brooklyn Brew Shop's kits). Their mixes use extracts, which some homebrewers aren't as fond of, but they are much higher quality than Mr. Beer. I've never used a Northern Brewer kit or tried a Northern Brewer beer, but I've heard good things. I've ordered supplies from the company twice before (big orders and bulky/awkward items) and they are an absolute pleasure to do business with. If nothing else, they're a great source for ordering additional supplies if you don't have a local homebrew shop.

If your boyfriend is really interested in homebrewing, you might want to consider getting him the book How to Brew by John J. Palmer. It's generally considered to be the most comprehensive book for new homebrewers. (http://www.amazon.com/gp/product/B009DH2PP4?btkr=1)

If he is NOT interested in homebrewing (he hasn't expressed a specific interest in brewing his own beer, and you simply think a homebrew kit would be an awesome present for a beer lover), you might want to rethink your gift. Enjoying craft beer and enjoying brewing beer are two separate things. While one does sometimes bleed into the other (you'd best like craft beer if you plan to make it in your kitchen), not all craft lovers enjoy brewing.

&gt; brewing 5 gallons or less isn't worth it

Take that as a matter of opinion. Remember, this is a hobby. I do 5 gallon batches because I can and because it will be drank. For a 1 gallon, either extract or BIAB for size and space are great places to start and learn and require minimum investment.

I would pick up the book How to Brew, or first edition is free online but highly recommend the latest as it has updates to process.

Sidebar has a wealth of knowledge. I highly recommend starting there and visit the Daily Q&amp;A for more information and to glean from others. Much might be over your head but give it time.

or the free 1st edition:
http://www.howtobrew.com/

Great read for new and experienced brewers. And you can never learn enough at http://homebrewtalk.com

Best books you can get are Complete Joy of Homebrewing or How To Brew. There is also an online (albeit slightly outdated) version of How To Brew here.

I would also recommend picking up Brewing Classic Recipes, although all of those recipes can be found online one place or another.

As for next steps... it depends on what you want to do. You can move up to bigger batches, you can try hopping into all-grain, do a combination of both, stick with 1G kits... whatever you want to do, it's all good.

How to Brew: Everything You Need To Know To Brew Beer Right The First Time, Paperback - $13.56

How to Brew: Everything You Need To Know To Brew Beer Right The First Time, Paperback - $9.99

&gt; Is anyone out there up to giving me a consolidated and complete guide on how to get this from the start all the way into the keg?

Yes, John Palmer already did. Buy it here: http://www.amazon.com/How-Brew-Everything-Right-First-ebook/dp/B009DH2PP4/ref=sr_1_1?ie=UTF8&amp;amp;qid=1394766726&amp;amp;sr=8-1&amp;amp;keywords=how+to+brew. Yes, It costs money, but it will be more than worth it. This will answer all questions you have, and questions you never thought of. There's a free edition at howtobrew.com, but it's out of date and seriously you've spent how much on your kegs? just buy the book.

&gt; What do I boil and for how long?

It's hard to say for this recipe. You might benefit from doing a packaged kit first. Generally assume a 60m boil, which means getting to a boil, adding your extract, and then adding hop additions at n minutes before turning off the heat. A 15m hop addition(as specified here), means you boil for 45 minutes, add hops, boil for 15 more minutes, then turn the heat off.

This recipe is a bad first one for leaving certain things assumed. I guess the people on that forum have a well-enough established dialogue that they can trust each other, but it makes the recipe less accessible to outsiders, and especially new brewers.

&gt; How do I get it from the kettle into the fermenter?

After you chill your wort, a funnel, if it's a carboy, or straight into a bucket. Later you might use a siphon and tube, but for now, pouring into the fermentor will do.

&gt; Do I rack to a secondary?

No. There's a sidebar post, but the answer is still no.

&gt; How do I get the beer into the keg?

A siphon. google auto-siphon, or, if you're strapped for cash, auto-siphon alternatives.

&gt; How long should I leave it in each stage (primary, secondary, carbing, any other time before drinking)?

primary: until your hydrometer has stayed the same for 3 days. Don't bother measuring in the first 2 weeks. Anything else you hear is a guess.
Carbing, IDK. Once it's carbed, start drinking.


&gt; Should I use a hop ball or hop sock or add straight to the wort both for boiling and dry hopping?

Optional. It'll mean less to clean up later. If it's convenient, go for it. Keep in mind that you should sanitize it for the dry hop. A spray bottle of star-san is the way to go here.

These got me started. Brewing is a lot of fun, and ultimately really simple. As the author of the first book says "Relax, don't worry and have a homebrew."