Reddit reviews How to Draw Fantasy Art and RPG Maps: Step by Step Cartography for Gamers and Fans

We found 17 Reddit comments about How to Draw Fantasy Art and RPG Maps: Step by Step Cartography for Gamers and Fans. Here are the top ones, ranked by their Reddit score. 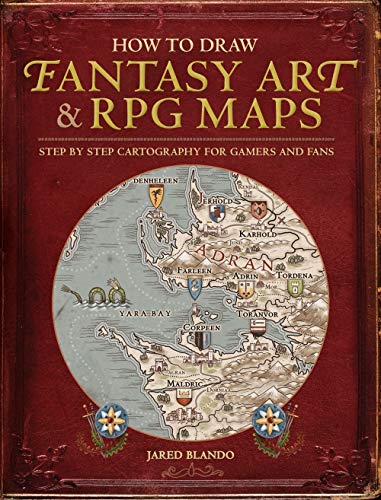 17 Reddit comments about How to Draw Fantasy Art and RPG Maps: Step by Step Cartography for Gamers and Fans:

How to Draw Fantasy Art and RPG Maps: Step by Step Cartography for Gamers and Fans https://www.amazon.com/dp/1440340242/ref=cm_sw_r_other_awd_yzD3wb2FTK43P

And there are also a lot of free tutorials online, like this one https://m.youtube.com/watch?v=p1eo-SzLCcY

Get this amazing book in the meantime to help your cartography! Worked for a beginner like me maybe it'll help you too :)

Try out How to Draw Fantasy Art and RPG Maps, it helped me out along with a lot of links I found by searching "drawing fantasy maps". I'm not art inclined at all, but I was pretty happy with my first map.

Inkarnate is a good digital tool, I'm personally a pen and paper fan, though. Gave me something I was proud to hang on my wall.

They were both done in photoshop. Photoshop CS2 is effectively free if you don't have it - i don't have the link to hand, but a quick google should help you out.

Draft one was done using this guide, and the linked brushes etc. I obviously feel like I can do a fair bit better now, but it was a great starting point.

For draft two, I bought a wacom drawing tablet/stylus for my computer, and pretty much drew on that as I would by hand. I also had this book to help, and it's invaluable as a general mapping resource - it's clearly for someone working at a much closer scale than me, though.

The main thing I'd stress when doing maps digitally is saving EVERYTHNG on separate layers. It makes it very easy to move around and edit each individual thing in a way you really can't with pen and paper.

This book by Jared Blando really helped my group's map artist up their game by leaps and bounds. Cannot recommend highly enough.

If you are starting with photoshop, I suggest you first get a basic understanding of how the program itself works. What I did was just to look up tutorials on youtube (There are thousands) and just follow along. In the start you don't really need to know what you are doing, just to get comfortable with the buttons and shortcuts.
Then I'd suggest learning about layers, since it's very important to know how they interact with eachother. Following that, try a map-making tutorial (which you can also find on youtube there are also several on cartographers guild, and after you finish it, try to recreate it from memory and see how it goes. Be prepared to put in a lot of time however, my first map took me some 50-60 hours to make. However I was learning as I was going along, seeing what works, and what does not work.

If you decide to try to do it by hand, all I can say is that practice makes perfect. I have a friend who bought ( http://www.amazon.com/How-Draw-Fantasy-Art-Maps/dp/1440340242#reader_1440340242) and managed to bang out incredible looking maps, and he's not at all a naturally talented artist.

In regards to your world map, it's a good start but has a lot of room for improvement. For one, I recommend drawing it on newspaper (there are sketch pads of the stuff at most art/craft stores). Then you can age the paper by soaking it in coffee, and that will make it look the part. More specifically, sketch the full map in pencil, then soak it, then ink over the pencil once dry. Otherwise the ink will bleed and come out of the paper. It is also missing a scale, so there is no way of gauging distances. Roads don't need to be fully drawn out like that; a dashed line is enough to convey the meaning without conflicting with the scale.

For a better guide and reference, this book has been invaluable to me in map making. It covers all of the principles and will give you ideas you may have never even considered. If this is for an RPG, players really appreciate a well laid out map.

Dave and Brett, get out of here.

Relatively new DM here - started last year. Here's my progression of hand-drawn maps. I introduce the maps to the players by selling them through an absent-minded but prolific cartographer. Here they are in chronological order, with descriptions below.

I don't know how he is about clothing, but a shirt he might find amusing: https://www.amazon.com/dp/B014FRG5TI

A container for his Dice or cards: https://www.amazon.com/LOOMEN-Treasure-Chest-Gaming-Container/dp/B01K5JPTWE

A cool book about creating makes for D&amp;D, we have this and it's interesting and not too difficult with the instructions: https://www.amazon.com/How-Draw-Fantasy-Art-Maps/dp/1440340242

A thing for his dice: https://www.amazon.com/Dungeons-Dragons-Mimic-Gamer-Pouch/dp/B01DN2B10E

I'm sure he has a set of dice, but if he doesn't they have tons of those for cheap on Amazon, in all sorts of colours.

This is a PS4 game, it's an RPG type, which seems like what he might be into: https://www.amazon.com/ArcaniA-Complete-Tale-PlayStation-4-Standard/dp/B00TKLFOKQ

For Magic, they have random sets on Amazon for cheap, with "rare" cards, I don't know if he needs more cards and what not. https://www.amazon.com/Random-Cards-Foils-Mythics-Planeswalkers/dp/B00HECBR9K

Here is 1000 random cards to boost his collection: https://www.amazon.com/Magic-Gathering-Cards-Rares-Mythic/dp/B007G91FZ2

Let me know if any of these seem like good ideas, or something is close and you need more along those lines, this was just a few minutes of searching.

If they like fantasy maps this is a nice book:

You can probably find it cheaper somewhere else. If they like different styles of maps then there will probably be books for that as well.


You could also get old atlases quite cheap which show different ways of making maps and how territory has changed over time.

If you're from the UK you can buy old OS maps of certain areas, there may be similar maps for different countries.

Thanks! I drew it all on an iPad using Procreate.

Started with a super-rough sketch with where I was gonna put everything--towns, rivers, and all. Then I started on the "real thing." Coastlines (and lakes) first, making them more complex than in the rough sketch. Then mountains, forests, doing all the bits by hand. (If I'd been using Photoshop, I might have tried to clone or make some kind of "tree brush," but I think the hand-drawing makes it look more natural.)

Next came the coastline outlines and waves. Then rivers and cities. I separated as much as I could into layers so I could mess with it later.

Colored the water on one layer, then did the land on its own layer. In general, I'm very unhappy with the color and will probably do it over at some point.

I assume everybody in the sub knows about this book, but it's got step-by-step instructions that are more or less what I did (the book takes it a lot farther into labeling and stuff that I'm not planning to do on this map). Can't recommend the book enough--it's what I would have dreamed for twenty-thirty years ago when I was actively playing RPGs!

Cool! Here are a couple of resources that I know about:

Thank you! If you want to start, the easiest way is just to get some paper and a pen and go for it!
I would absolutly reccomend watching the youtube channel WASD20. I love this guy! He takes you step by step of different styles and gives great tips. He reccomened this book which is where some of my designs come from. (Im not the creative type!) https://www.amazon.com/How-Draw-Fantasy-Art-Maps/dp/1440340242/ref=mp_s_a_1_4?keywords=cartography+book&amp;amp;qid=1565143475&amp;amp;s=gateway&amp;amp;sr=8-4