We found 13 Reddit comments about iCreatin Passive PoE Injector and PoE Splitter Kit with 5.5x2.1 mm DC Connector. Here are the top ones, ranked by their Reddit score. 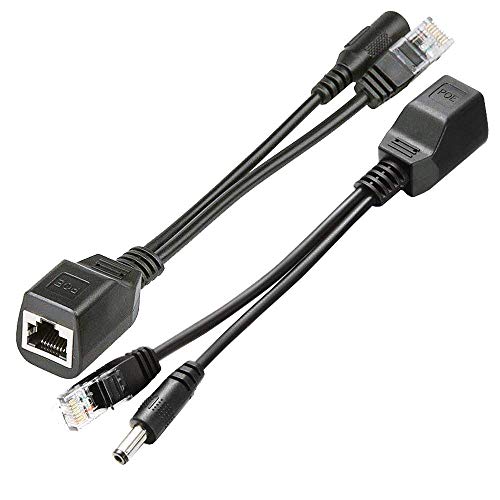 Just an FYI, if your runs aren't too long and you don't need gigabit you can usually get away with passive PoE. Not always, but it's worth a shot. I have cameras powered by both active &amp; passive PoE.

It would have probably cost you less to order than to make. :)

The splitter adapter from this kit works with Ubiquiti 24v passive https://www.amazon.com/dp/B00NRHNPUA/ref=cm_sw_r_cp_api_i_rgF6CbM6QXV9B it looks a lot better than adding your own barrel connector.

Whatever you do don't use the ubiquiti POE injectors as they spew RFI.

Get a passive POE injector/splitter and plug in a proper power supply. Although at that amperage you might be concerned with ethernet wires catching fire.

I'm assuming you're looking for something like this - passive poe injector and splitter kit which literally just takes a couple of pins and makes them pass whatever voltage is fed into it.

So, keep in mind that PoE devices are not 12 volts, and transmission loss in a 12VDC circuit with that small wire - even doubled up - is going to limit you to under 15ft total cable run.

Backing this up - what PoE devices do you have, and what "emergency devices" do you want to run?

Yep, it's PoE injectors similar to these:

10/100 only uses 2 pairs of the 4 pairs in a Cat5 cable, instead of a health check if something is powered which is what you seem to want. Which may work and may not, you could power it from the location you want the LED and use the LED on that. Something like this https://www.amazon.com/iCreatin-Passive-Injector-Splitter-Connector/dp/B00NRHNPUA

My cameras are not natively POE, But I just used this kit to make them POE.

Yea, when you mount them, you typically, drill a small hole and run the network cable through the small hole, once through the hole, you put the RJ-45 end on it and crimp it. The cam housing should mount right over the top of the hole you drilled and will keep that wire from being exposed which keeps people from having access to cutting it. I did purchase a LPR camera once that did not support PoE and you can use a dongle which allows you to run PoE toward the camera, and then split the power out of Pin 7&amp;8 out into that dc power adapter type of dongle. I still would not prefer a camera like that unless it offered a specific feature like License plate reading. Otherwise, most run of the mill ip cameras should PoE compatible.

If you're planning to throw away your old cameras anyway, you could try these instructions and see if they happen to work for you.

You might also be able to find some cameras that will allow you to power via PoE while simultaneously allowing you to connect via WiFi. (More commonly it's either/or.) In that case you'll need just the PoE injector, and plug the cable directly into the camera on the camera side. I know several Amcrest models such as this one will stay connected on both PoE and wifi when the PoE connector is plugged in, so I assume that you could buy a PoE camera, use the CAT5 to power it, and use WiFi for network. (Disclaimer -- I haven't specifically tested using the PoE for power only rather than power+network ... I just think it's likely that it will work.)

(Edit: Oops ... The Amcrest camera I linked to is not a PoE camera, but it does stay connected simultaneously to wired and WiFi networks. So, I might be wrong in thinking you can find a PoE camera that will also support WiFi while using the PoE jack for power -- but you should definitely be able to buy a camera like the one I linked to and power it by using the inject+splitter route.)

There are three kinds of PoE.