Reddit reviews Implementation: How Great Expectations in Washington Are Dashed in Oakland; Or, Why It's Amazing that Federal Programs Work at All, This Being a Saga ... Morals on a Foundation (Oakland Project)

We found 5 Reddit comments about Implementation: How Great Expectations in Washington Are Dashed in Oakland; Or, Why It's Amazing that Federal Programs Work at All, This Being a Saga ... Morals on a Foundation (Oakland Project). Here are the top ones, ranked by their Reddit score. 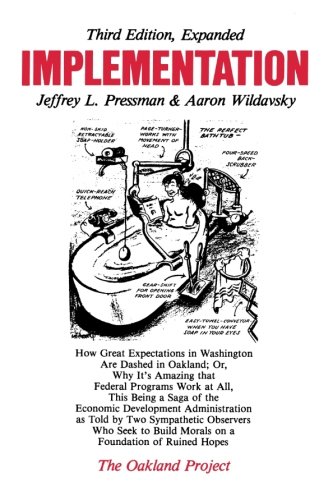 5 Reddit comments about Implementation: How Great Expectations in Washington Are Dashed in Oakland; Or, Why It's Amazing that Federal Programs Work at All, This Being a Saga ... Morals on a Foundation (Oakland Project):

In the case of public policy this means that all manners of people values could have an impact on the policies goals. For example, policymakers (such as legislators) all often have competing visions about what the goal of a policy should be. Bureaucrats often have their own opinions about what the goals should be. Constituents might have all sorts of other competing opinions. The target population may have other opinions. What this means is that in order for policy to pass it usually has to have a certain amount of ambiguity baked in, so as to satisfy the competing values of all the different groups/actors.

Deborah Stone's book Policy Paradox is principally about the role of ambiguity in public policy and in establishing policy goals. Policy Paradox is mandatory reading for any student of Public Policy. She demonstrates how vague (ambiguous) goals are often necessary in order to achieve the votes of all the possible veto actors (committee chairs, speakers, majority leaders, median voters, Presidents, etc...). In short, many actors make it difficult to reconcile what the policy should do. And, often times not all goals can be achieved simultaneously ; Some goals are mutually exclusive to a point. This can make it difficult to determine whether a policy is actually a success or a failure.

Policy Paradox builds on some of the decision making work of Cohen, March, and Olsen who described how ambiguity of goals plays a role in decision making in "organization anarchies" such as governments and universities. Cohen and March also developed the theory of bounded-rationality and discussed the importance of ambiguity in individual decision making as well.

Anecdotally, I've spoken, in the course of researching legislative oversight, with policy makers who have been personally (and professionally) frustrated when they voted into creation a new policy program and appropriated money to a bureaucracy to implement that program. And then had the bureaucracy simply not implement the program in the slightest because it was simply to far afield from the goals/mission of the bureaucrats.

This is much less of a problem outside of public policy. In "Design Thinking" the only person whose values matter to the "designer" is the clients. The designer merely designs to the clients singular values. This is why "design thinking" approaches are not generally a good approach for policy analysts or policy makers.

If you're looking for a guide on how to perform a policy analysis, I suggest you read Bardach's Eightfold Path to Policy Analysis. It's essentially the standard.

At the VA, the fiscal year and the bidding process overlap such that almost always, three months of spending are lost. Furthermore, unable to buy in bulk, as they must clear each purchase, they end up expending costs on that paperwork AND lose bulk discounts.

It's been shown the PMCs cost more than not private:
http://pogoblog.typepad.com/pogo/2012/11/dod-contractors-cost-nearly-3-times-more-than-dod-civilians.html

Contracting is not a panacea for efficiency:
http://www.salon.com/2013/07/11/5_biggest_myths_about_federal_contractors/

Finally, I have issues with the particular costs incurred (contracting to a Tech company).

Here's a great book on the subject: https://www.amazon.com/Implementation-Expectations-Washington-Programs-Foundation/dp/0520053311