We found 17 Reddit comments about IMUSA USA R200-12W Aluminum Mug for Stovetop Use or Camping 1.25-Quart, Silver. Here are the top ones, ranked by their Reddit score. 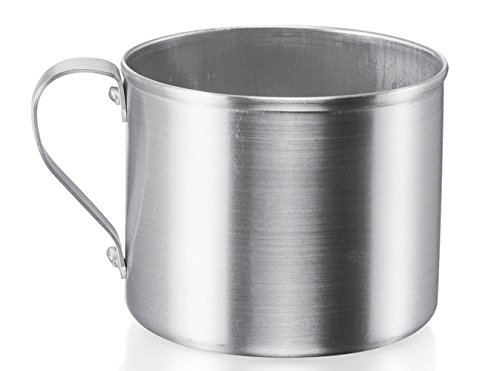 Made of AluminumStovetop Safe with Side HandlePerfect 1.25-Quart for Single Serve UseCan be used for Camping, and other Outdoor ActivitiesIdeal for Chocolate, Coffee, Tea, Soups and More
Check price on Amazon

My 1.25q Imusa Cup cost $7 shipped on Amazon, is big enough for my wife and I to share, and weighs less than a lot of titanium cookware.

Sit on a log or a rock? I carry a &lt;1oz piece of foam as a sit pad. But I wouldn't bring a book because it's heavy and nature is amazing all by itself. (that's just me though)

I usually bring a hammock rather than sleep on the ground, so since I already have that along it's great for lounging. r/hammockcamping

I drink coffee/mixed drink (whisky and water) straight out of my 2.5oz aluminum cook pot/mug: https://www.amazon.com/dp/B004444XMY/ref=cm_sw_r_cp_awdb_lyYNzbQEFTK4N

Your food bag is way too heavy. Even a plastic grocery bag would be better.

Replace the pot with an aluminum grease pot or mug like so.

Take a good, hard look at your backpack and pull off anything detachable. Then start trimming anything you don't have a specific use for like interior pockets and straps/cords you don't need. Or sell it and get another.

I'm a little confused about your clothing system. The camp stuff is for sleeping? Is the jacket like a down puffy or something else? The running pants seem heavy to me. This stuff can be switched up pretty easily and cheaply along the way though.

Repurpose the poncho as a rain kilt or drop it.

Replace the rain jacket with a frogg toggs.

I think you're double counting your underwear. You have the spare pairs listed at twice the weight of the worn pair but also the quantity as two.

If you don't want to shell out for a lightweight trowel, either cut down the one you have or replace it with a large stake like this.

One carabiner only, if you're using it for bear bagging.

Drop the emergency blanket, you have an entire tarp and sleeping bag. If you're worried about being cold at night rather than emergency use, it's best to address that by changing your sleep set up.

Electrolytes? If you want to use drink mixes that's fine but don't carry around electrolyte tablets or powders just in case and then never use them.

Your stove is fairly heavy, you can save 9 oz with a BRS3000 (.9 oz) and a light aluminum or Ti pot. This is the cheapest way to lighten up if you want to stay with a cannister. A DIY ethanol stove is cheaper and lighter still.

Do you need such a heavy battery?

Are you bringing a phone?

If you went superduper budget on your cookset:


That should get you there I think! I mainly just grabbed ideas from: https://www.reddit.com/r/Ultralight/comments/4iz7re/ive_compiled_a_list_of_ultracheap_and_ultralight/

If you’re bargain hunting, the 0.7qt IMUSA Aluminum Mug is nice. It’s a comfy size to cook ramen in, although I’m sure you could get away with something smaller if you are careful.

You have to make your own lid, but tinfoil or a cut out bit of disposable pie tin work fine.

I don't normally recommend so much cooking gear, but since it sounds like you actually cook on trail I recommend:

As for a cup - I like the sea to summit x-cup. The best thing about it is that it collapses flat and takes up very little pack space. - https://www.amazon.com/Sea-to-Summit-XSSCUP-X-Cup/dp/B0065J3JWG

For real cooking I wouldn't go with titanium. It heats unevenly and has hot spots that can cause burnt food. Cheap aluminum is generally lighter than titanium anyway.

1L is plenty for 2 people. Also titanium is horrible for actually cooking. It gets hot spots and burns your food. You'll also pay a premium for anodized aluminum. Just go for an Imusa 12cm mug, which is 1.1L or an equivalent non-anodized aluminum pot. It is on amazon for like $5. Save yourself a lot of money.

BTW the foods you listed are all "dehydrated" style foods that can be rehydrated in a ziplock freezer bag slipped inside a reflectix pouch :)

These are a little spendy but are actually purpose built. Honestly though, having gone down this road a number of times I would suggest sticking to an aluminum or titanium cook pot to boil your water in and use your favorite over the counter bottled water brand bottle of choice. I personally like Smart Water brand. They're stupid durable, available in a variety of shapes and sizes. When you're done with your camping trip just throw it away and get another one next time.

Yeah it is a long drive, but just get up early and drive out there, takes a couple hours, and trust me, it's worth it. In Ocala, you can hike all day, then setup camp, and then walk over and go swimming in a spring, two nights in a row. But you need to either hike with a partner and self shuttle, or pay someone to drop you off on the other end of the trail. But definitely you want some easier overnights under your belt. I think Hillsborough and Starkey would be good shakedown hikes.

Another option that people love is the Imuza. Comes in 10CM and 12CM widths.

You can try ultralight aluminum mug under $10. It sometimes drop to $3 or less too.

I have one of these. It's very nice for the reasons you mention. I also have an Imusa 12cm and a Toaks 750ml pot. All are useful in different ways and for different applications. One is tall and skinny (Toaks 750), one is short and wide (Toaks 700), one is tall and wide (Imusa). My main criteria is being able to fit 2 cups of water, but right now am really liking the Imusa for its wideness (to better accommodate my Fancee Feest alcohol stove) and its tallness because I was able to make a nice aluminum flashing windscreen that I can fit inside the pot when I'm not using it.

One other thing I have discovered is the lid to the 700ml fits my lidless Imusa pot perfectly.

Just a note, the IMUSA pot is a little under 4oz, paired with a plastic spoon. It doesn't come with all the stuff the Halutite does but also only costs $7.