We found 24 Reddit comments about Intel NUC DN2820FYKH with Intel Celeron N2820 , 2.5 inch HDD support, Sliver and Black. Here are the top ones, ranked by their Reddit score. 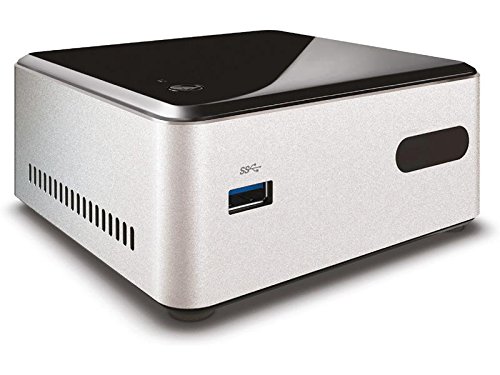 it should be fine as a PHT client box.

I use these Intel NUC mini boxes and they work amazingly well. The NUC has a little faster processor, but at the nice part about the full PHT app is you don't do any transcoding so both client and server are basically pass through devices.

Along with the apparently frequently bought together RAM and this SSD, should make for a nice system. It runs TF2 on medium at 30fps though, so it may not be 100% what you're looking for., but it's highly compact.

Otherwise there is the Lenovo IdeaCentre Q190, though I can't really find any benchmarks on it's Celeron 1017U.

Or you can use this build:

Don't worry about the power draw being 93w, it should work just fine.

Both of those are horrible deals. They're not bad boxes, but you can get MUCH better hardware for $150 USD.

Get an Intel NUC and add some RAM and a USB boot drive: http://amzn.com/B00HVKLSVC

That will be the best bang for your buck.

For cheaper, I would recommend ODROID-U3 or an OUYA.

DN2820FYKH runs XBMC (I've been using XBMCBuntu on this one) just fine. This is the celeron NUC. I put 8gb of ram in it and a standard sata hard drive. No built in Bluetooth on this one though, so I use a little USB Bluetooth dongle and a replacement Amazon FireTV remote. Works awesome.

I thought the price was around right where I would expect it for my NUC that I use as a HTPC/Steam in home streaming.

It's a lower end NUC but it plays/streams all my media/games without issue.

If the new device won't be used for storage, have you considered an Intel NUC? The celeron version goes for about $142US and you'll need to add in RAM and a 2.5" drive (if you get the 'H' model).

The Celeron CPU is more than enough for 1080p playback and transcoding to an iPad.

I recently built an HTPC out of an i3 NUC and couldn't be happier. I went with the i3 in case I wanted to have more options for it down the road.

Buy an Intel NUC, some RAM, some kind of hard drive, that $30 Logitech keyboard + trackpad, and install OpenELEC. It takes all of five seconds to install and setup and it's awesome.

It'll run you about $200 or so total but should play anything you through at it.

Here's a link to the unit he's using, I believe:

Actually I have this NUC for a HTPC and it works perfectly. No reason to get an i5 for a streaming only device.

If you really want a gaming build then the cost will be much more than a NUC.

I have this one but I know others work. Sorry, can't answer on the other HD formats. May be worth looking into Kodi with PlexBMC - I think it will bitstream just about any HD format.

I don't the Pi really has the chops to server media over a LAN but who knows, maybe i'm wrong.

I'm not so sure about the server side being the issue. If you're choosing to transcode, then yes this utilizes the CPU on the server/NAS to do the conversion, however there other choices.

Direct Play essentially plays the file as-is off the network, as long as its 100% compatible with your media player.

Direct Stream is similar, but allows playback of files which might not be in the necessary file container for your media player. It's not nearly as CPU intensive as transcoding.


I think I'm going to give the Celeron N2820 (Bay Trail-M) powered NUC a try, since it's only $134 on Amazon, minus an SODIMM and HDD. Although still not as capable as my current i3, it seems much more powerful than most Atoms. And has a TDP of only 7.5W so cooling should be simple.

I think all the current generation have the ability to use a 2.5 inch drive. Here is one for only $140.00 on Amazon

It's the newer model; you can use a 2.5" HD instead of a mSSD and you don't have to buy a wifi chip.

You're obviously into gaming, from the games not listed on Steam you also play Empire Earth, Battlefield, Civilzation V.

The SSD can easily hold an OS if you're using it purely for the OS, but there's some Intel trickery you can use to make it into a cache, or just use it as a storage disk for "Things that are small". Like uh, Business Documents. Plus, it's upgradable to anyone with a screwdriver and a copy of the manual. Plus, the NUCs make the little intel Ding-Da-dun-da-ding sound whenever you open the packaging.

Well I have the cinema experience addon, and would need something that could handle all that as well.

&gt; The only thing is that they are a bit more expensive than building my own, but I can't beat the size.

Don't look past the nice troubleshooting feature of an external power brick that you can easily swap or cheaply replace to diagnose problems. Also since you don't need much space for this task, little 120+GB SSDs would be perfect. Lowering heat, giving them better performance, and reducing chance of a mechanical failure.

As to more expensive... Still comes in at $300 budget and that's with 8GB RAM and an SSD! Highly recommend you max them out at 8GB since they only have one memory slot.

I use the cheapest, lowest end NUC for our living room and it handles streaming full Blu-Ray images over the Ethernet with XBMC and Total Media Theater. Works like a champ. Only issue is that it can really only do one thing at a time, which isn't usually an issue with a HTPC. But if say Windows Update starts hogging resources, you'll know it.

That is enough for playing videos. It might even play games depending on settings. It supports Dual Channel memory though, so it's better to get 2 sticks of ram. If that's 2x2GB that's fine.

The processor is rated at 100W. That seems like a lot to me.

I have http://www.amazon.com/Intel-DN2820FYKH-Celeron-N2820-support/dp/B00HVKLSVC . It's less than 20W total, is quiet, runs OpenElec from a flash drive, plays blu-rays over the network. I've never tried to play games.

Intel NUC with a 4th gen Celeron N2820. Includes a wifi adapter if I am not mistaken; otherwise you can find one for pretty cheap. Throw in a 2.5" drive of your choice and 1.35V laptop RAM and you are GTG.

There are plenty of other options with i3s and Gen 3 (Ivy Bridge) hardware for fairly cheap.

Size comparison. The Gigabyte Brix and Asus VivoPC are the only two options that get close in size, but don't come near some of the lower-end NUCs in price.

Let me be the first to suggest an intel nuc celeron running openelec. That guy is rock solid, works with the xbox 360 remote out of the box, and was partly developed with XBMC in mind. It's my main non-gaming box. http://www.amazon.com/dp/B00HVKLSVC/ref=cm_sw_r_udp_awd_7vI0tb0M0Q5N0

This is blatantly false. You are misinformed or biased, I presume.

Is cheaper (even with purchasing memory/HDD) than most Android phones and the size of your hand. A Galaxy 5 costs 600 dollars unlocked. Sure, a raspberry Pi is cheaper and small. But, A NUC will run circles around a Pi and play 98% of all MAME games unlike the Pi. And has better compatibility and ease of use.

COuld by an HP Stream 14" as well. Its 200 bucks and comes with everything and a screen built in.