We found 18 Reddit comments about Intex River Run I Sport Lounge, Inflatable Water Float, 53" Diameter. Here are the top ones, ranked by their Reddit score. 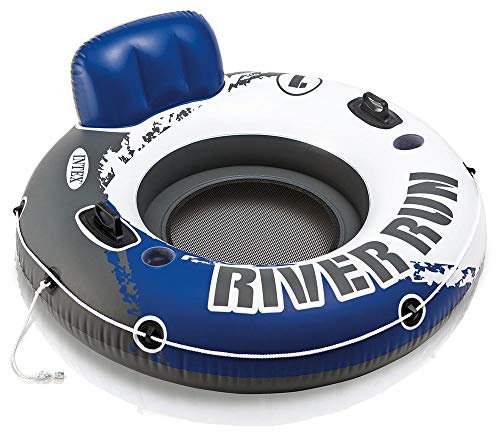 Everyone is completely missing the point. This man obviously knows his rafts. The River Run is one of the greatest things ever invented. Not one, but TWO CUPHOLDERS, dual handles, a rope, mesh bottom, and a separate inflatable headrest.

Edit: Link for anyone who needs a raft. Seriously, I've owned one and that's because it's the only one I ever needed. 3 summers strong. All my buddies bought them and they're fucking great.
http://www.amazon.com/Intex-58825E-River-Run-I/dp/B000PEOMC8

Under an hour drive from Charlotte, the Catawba is a good starting point but better options exist in Columbia SC or elsewhere in NC (Green River, Deep Creek, French Broad)

Floating can be a wonderful activity for hot weekends, the Catawba is pretty warm so don't expect a huge cool off.

If you want to make a go of it once or twice a year, DIY and save the $20/person charge of companies.

Some suggestions to get you started:

I got these https://www.amazon.com/Intex-River-Lounge-Inflatable-Diameter/dp/B000PEOMC8/ref=sr_1_5?ie=UTF8&amp;amp;qid=1527094550&amp;amp;sr=8-5&amp;amp;keywords=inner+tube and they work great, you can even put drinks in the bottom without worrying about them going into the river

If you're willing to wait a couple days, the River Run 1 on Amazon is a durable tube with two, count em, TWO cup holders.

This is what we do... A quick path is just to take the bridge into VA then on the WVa side over the last bridge hang a right toward harper's ferry and there's a little parking lot. You don't have to pay to park, but they will put an envelope on your car. You can start here if you like or end here.

If you choose to start here, there's a landing area where the rivers Ys and you can get out there and walk a bit... this tubing trip is about an hour or so.

If you use the park area as your get out spot you can go up the river a ways by river riders and launch in on the public boat launch that is right near theirs. Take a look at a map on google maps and follow the river up... We just drove our cars around and you can follow the buses to see where they put in and get out.

From where River Riders puts in on the area that's around their HQ, the ride is about 3-4 hours down to the parking spot by harper's ferry... I would say there's only one rapid that is challenging at all, but a group of 8 of us all managed to make it through just fine, and it was pretty fun.

Check out this sweet review. . .
C-Teezy
5.0 out of 5 starsAWWWWW SNAP!!!
March 23, 2011
Color: Blue|Verified Purchase
I HAD A GREAT TIME IN THIS TUBE
I was also admittedly drunk, but whatevs. The river was hella low, and i got stuck on some rocks several times, but this tube was like "AWW NAW HELL NAW" and i just scootched right over top of all them rocks and sticks and nonsense. The cupholders and handles were perfect for my can o' wine and my Nalgene o' Bootlegger. Not gonna lie, I threw up in the river, but I don't blame the tube. A few people had other brands of tubes, and their tubes popped, but luckily, i had brought an extra one of these already inflated. Ironically, these were the same people who were dissin on these vinyl tubes because "canvas wrapped is sooooo much better." WHERE IS YOUR CANVAS GOD NOW??

I don't know where the tubes are now, i think they might have gotten thrown into a bonfire, but if i ever feel like pukin in a river again, this will be my method of flotation. It inflated and deflated super fast, but it was bulky to carry back to the pick-up point.

Final word -- If you need a tube: BUY THIS JENK RIGHT HERE

Much better quality, two cup holders, a headrest, a good valve, thicker plastic. Cheaper to buy this than to pay for one tube rental.

Honestly, I am pretty damn picky when it comes to tubing. There are a lot of ways for it to go south and be less than enjoyable and I am not about that life. What I would do if I were you (and when I am me on a new-to-me river) is find a livery that does tube rentals and do that for your first time out. What that does is usually puts you on a generally slow and shallow stretch of river that has been cleared of tube popping debris, lets you see if you like it, and, if it is just you and your kids, has the bonus of picking you up and taking you back to where you put in. Then you know for the next time and you buy this or this. We have both in our small flotilla and have used them dozens of times. Some extra pro tips: clip a life jacket to at least one of them so in case you do pop a tube you still have a way to float and pick up a cheap $1 plastic paddle from Goodwill if you ever see them, they are great for pushing off of potential obstacles.

edit- OR drive 2-ish hours to u/tipsycup’s kayak and tube livery and I will handle it all for you! F-r-e-e, plus keto boat snacks!

We do Huguenot Bridge to Pony Pasture regularly. Takes anywhere from 2.5 - 4 hours or so depending on water level. Just have to get out at Z-Dam. Also, we've been using this tube and its great, esp for $20

This is what we use have not had a Problem yet. The Head rest and Cup holders make it worth it. 4 rafts &amp; Cooler $99.99 Those large ones are nice but you will get stuck in a few places and if you head into a tree your screwed. use the rope that comes with to tie them together also This is the best cooler raft we found the sevylor one is cheap, the lazy river one was too small for our cooler.

My fiance have a couple of Intex River Runs.

Admittidly we haven't used them very much yet, but I've seen lots of other people use them and they tend to be the first thing that pops up when you google "floats for tubing". Lots of Amazon reviews claim they're pretty tough and can withstand even some of the tougher rapids Again, I'm a newbie here too, but when I was looking this up last year a lot of other message boards pointed towards these.

Welcome to Missoula! (or whenever you get here)

Be sure to grab an Intex and join all of us on the river this summer :)

Depends. I tried using the shuttle once and they refused to take me since I didn't have a "dual-chambered" tube, which is bullshit. It was just their way of forcing you to rent one of their tubes if you want to ride with them. Taking 2 cars is definitely the way to go, leaving one at the exit point (Parking costs $3). If you're going to go more than once over the summer, just invest in the tube a life jacket. These are the tubes everyone buys, and buying it costs the same as renting it once. It won't help you for tomorrow, but life jackets are currently $12 on Amazon. So once you make the initial investment, it's free to go as much as you want after that.

I use a different route than what was suggested above: Start at Cochran island, 5450 Interstate N Pkwy Sandy Springs, GA 30328 and end at Chattahoochee River National Recreation Area: Paces Mill
3444 Cobb Pkwy Atlanta, GA 30339. I've done a lot of tubing and this is the best route, and it's very popular. It takes 3 hours. I've never heard of being able to rent only the life jackets, but it may be possible.

I go pretty often, so let me know if you have any other questions. Oh, and here's where you check if it's safe to go, but this is only an issue if it's been raining during the week.

EDIT: I just saw an even better deal for life jackets

No need to rent, just buy this one, me and a bunch of my friends used these on the James and they work fine.

No problem. A few of my friends have this tube by the same manufacturer as the other. It's $20 but has significantly thicker material (felt like the same stuff as a whitewater raft), cupholders, and a net across the bottom you can sit on rather than fall through. Have fun!

I have one of these. It's pretty high quality and still cheap compared to renting from a company. The only complication is that you need two cars to coordinate rides. My friend also has one of these which lets us bring along a boatload of drinks and snacks.

If you stick with that brand, they have a great locking system to attach everyone together.

I didn't know the trick about sitting on the bulge for even inflation. Cool!

Here's the one I got a couple years ago which I absolutely love.