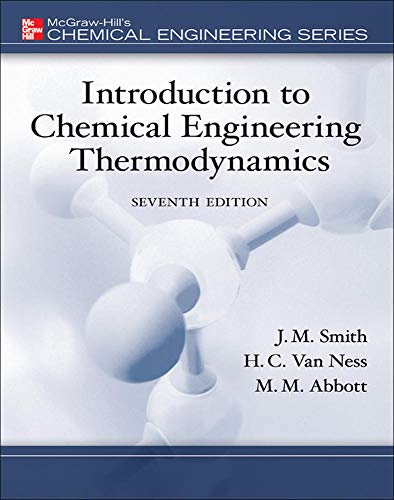 All of the books I can see from top to bottom on Amazon:

There might be better books out there, but I would recommend Introduction to Chemical Engineering Thermodynamics by SVA for those starting off. It does a good job of explaining the basics. However, it doesn't go far beyond the basic principles.

My favourite YT resource for intro videos would (obviously) be LearnChemE. They have many videos that can introduce the topics in simple terms.

Also keep in mind that Thermodynamics can be very complex in certain areas, especially Solution Thermodynamics. I would strongly recommend making an effort to understand the derivations used in that section. Understanding them, instead of just memorizing them, goes a long way to help you tackle difficult problems in that section.

I can second this. You're going to have to take a course on the first three topics and likely one on the math and numberical methods behind it all. I used Bird, Fogler, and McCabe. The Bird text is unnecessarily theoretical in my opinion, but Fogler and McCabe are excellent. McCabe is particularly good at covering everything without going too in-depth. For Thermo, this is the one I see used most commonly, though only about half the text is used in most curricula and it's a fairly dry read in my opinion.


Like I said, you're probably going to want to review some math as well. There's quite a bit of calculus involved, so if you've been away from that for a few years, I would brush up on some basic integration, partial derivatives, and some fairly basic differential equations. The other topic is numerical and computational methods, but that's something you can learn on the fly with a solid background.

ChBE 321 will almost certainly use Smith Van Ness. It's a McGraw Hill book so it's expensive, but I'd say it's worth picking up. It's a good book (as far as engineering textbooks go) and one I and my classmates actually used sometimes after finishing the class. Also thermo is one of the more conceptually difficult classes you'll take in undergrad, so it's worth having an additional reference.

You can find it used versions, older editions, and international/SI editions for cheaper, especially if you look off amazon like at abebooks or similar.

I don't know many good resources other than the fact that this book is amazing.
http://www.amazon.com/Introduction-Chemical-Engineering-Thermodynamics-Mcgraw-Hill/dp/0073104450/ref=sr_1_6?ie=UTF8&amp;amp;qid=1421900441&amp;amp;sr=8-6&amp;amp;keywords=introductory+chemical+engineering+thermodynamics

You don't use a whole lot from thermo 1 in thermo 2 in my experience. The entire class is phase diagrams and Gibb's free energy and Raoult's Law. If you understand those concepts, you have a chance at understanding fugacity, which is basically what thermo 2 is about lol.

I see. I went through this book: http://www.amazon.com/Elementary-Principles-Chemical-Processes-Richard/dp/047168757X and this book: http://www.amazon.com/Introduction-Chemical-Engineering-Thermodynamics-Mcgraw-Hill/dp/0073104450/ref=sr_1_1?s=books&amp;amp;ie=UTF8&amp;amp;qid=1395417059&amp;amp;sr=1-1&amp;amp;keywords=chemical+engineering+thermodynamics