We found 2 Reddit comments about Jarrow Formulas Methyl B-12 & Methylfolate + P5P (B6) Lozenges, Cherry, 60 Count. Here are the top ones, ranked by their Reddit score. 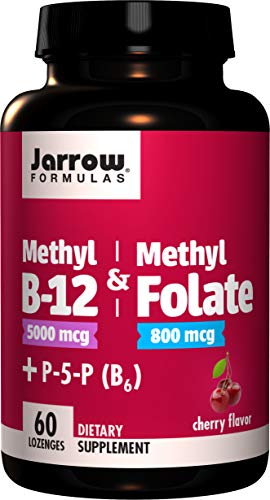 Provides Methyl B-12 plus Methyl Folate and Pyridoxal 5-Phosphate in a Convenient Lozenge FormSupports Brain Cells and Nerve Tissues*Methylcobalamin (Methyl B-12) is the Most Bioavailable and Best Utilized Form of Vitamin. B-12. Vitamin B-12 Helps Maintain Brain-Health, Vitality, Levels of Restful Sleep and an Enhanced Mood.*Folate (Vitamin B9) Is Needed to Support Cardiovascular and Neurologic Health and Proper Cell Division*Pyridoxal 5-Phosphate (P-5-P) Is the Coenzyme Form of Vitamin B6 and Is Necessary for the Metabolism of Proteins and Amino Acids*
Check price on Amazon

My doctor has me take 50mg daily of the douglas brand, but I also get an additional 2.5 mg in the jarrows sublingual tablets I take 1 a day of (I take the 50mg before bed with magnesium and zinc to create a higher qualty ZMA as opposed to most ZMA formulations that use the cheaper version of b6. I actually used to get diarrhea from a crappy ZMA due to a cheap form of b6 and magnesium.

Essentially there are two genes (that we currently know of) that impact how your body processes folate. One is *677 and the other is *1298 (where the * can be A, C, or T depending on the mutation). You can inherit the mutation in one or both of these genes from one or both parents. 'Homozygous' for one of those genes means you inherited two defective copies of that gene, one from each parent. 'Heterozygous' means you only inherited one defective copy. But each gene is treated separately and carries various risks and nutrient concerns. So the permutations are:

&gt;I have one copy each of the two heterozygous MTHFR mutations

This means she is heterozygous for both genes, so she has C677T and A1298C together. I don't know the status of your 1298 gene, but your statement indicates you have the T677T variant which is two mutations of the 677 gene, one from each parent. If you also had a defect in your 1298 gene, the doctor probably would have noted it (although it doesn't hurt to confirm). The level of mutation you have will determine how much of an impact there will be on your dietary needs. From the Masterjohn page:

&gt;There’s a good chance you have an MTHFR polymorphism. In some populations, the percentage of people who do not have either at least one C677T allele or one A1298C allele is only 15%! Most of the research is on the homozygous C677T allele because it’s the strongest variant. But actually the two alleles and their combinations simply cause a graded decrease in the activity of the MTHFR enzyme. One A1298C allele decreases its activity by 17%. One C677T decreases it 33%. Two A198C decrease it by 39%. One of each decreases it 53%. Two C677T decrease it by 75%.

So OP (according to these numbers) has a 53% decrease in their MTHFR activity (folate conversion) while you have a 75% decrease.

For more reading, here is another page discussing the variants.

As for the prescription, you can get a very similar product for much cheaper from non-prescription brands like Jarrow (here or here). If you are trying to match the product you were prescribed, look for a product with 3000 mcg methylfolate, 35 mg of P5P B6, and 2000 mcg of methylcobalamin (B12). Note that the dosing of folate is quite high in that product which some researchers (like Masterjohn) don't find terribly useful. Read around on his page for a bit and decide for yourself what you think is best, but if it was me (not medical advice!) I would replace that prescription with something cheaper and very likely just as effective. You can also look into choline supplementation since that is likely to be an issue for you as well with such a strong mutation.