We found 9 Reddit comments about Jumping into C++. Here are the top ones, ranked by their Reddit score. 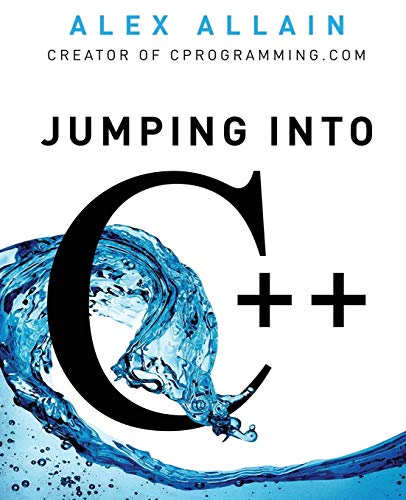 it doesn't matter what editor you use to write code, the code will be exactly the same at the end of the day (unless you use Visual C++ gimicks).

I recommend buying a book.

Following video tutorials will just be you copy and pasting code, which really doesn't help learn.

I learned from this book and so I know it is a good book to learn from :)

No problem. I am by no means an expert in writing code or buffer overflows but I have written several myself and even found a few in the wild which was pretty cool. A lot of people want to jump right in to the fun stuff but find out rather quickly that they are missing the skills to perform those tasks. I always suggest to people to start from the ground up when learning to do anything like this. Before going into buffer overflows you need to learn assembly language. Yes, it can be excellent sleep material but it is certainly a must. Once you get an understand of assembly you should learn basic C++. You don't have to be an expert or even intermediate level just learn the basics of it and be familiar with it. The same goes for assembly. Once you get that writing things like shellcode should be no problem. I'll send you some links for a few books I found very helpful. I own these myself and it helped me tremendously.

Hacking: The Art of Exploitation I used this for an IT Security college course. Professor taught us using this book.

The Shellcoders Handbook This book covers EVERYTHING you need to know about shellcodes and is filled with lots of tips and tricks. I use mostly shells from metasploit to plug in but this goes really deep.

If you have a strong foundation of knowledge and know the material from the ground-up you will be very successful in the future.

One more thing, I recently took and passed the course from Offensive Security to get my OSCP (Offensive Security Certified Professional). I learned more from that class than years in school. It was worth every penny spent on it. You get to VPN in their lab and run your tools using Kali Linux against a LOT of machines ranging from Windows to Linux and find real vulnerabilities of all kinds. They have training videos that you follow along with and a PDF that teaches you all the knowledge you need to be a pentester. Going in I only had my CEH from eccouncil and felt no where close to being a pentester. After this course I knew I was ready. At the end you take a 24-long test to pass. No questions or anything just hands on hacking. You have 24 hrs to hack into a number of machines and then another 24 hours to write a real pentest report like you would give a client. You even write your own buffer overflow in the course and they walk you through step by step in a very clear way. The course may seem a bit pricey but I got to say it was really worth it. http://www.offensive-security.com/information-security-certifications/oscp-offensive-security-certified-professional/

C++ Primer is good to have, but when I first started, it was way over my head. Same for the Stroustrup books (he's brilliant but not a good teacher..)

Jumping Into C++ by Alex Allain is the better book for beginners, I think. He explains things very clearly (especially pointers). I think the Allain book, followed by C++ Primer is a better path for beginners.

Want to learn to code? Want to learn C++? Struggling to follow your lecturer or books and tutorials written for experts?

Alright, much thanks for the advice. How about this one: Jumping into C++

If you're looking for a book, I recommend this one.

Then learn c++ as it's the most commonly used language in the industry. Also learn how game engines and games work though. Go on amazon pick up a few books on game development, then try using a few game engines like unity3d and unreal engine. create stupid basic games just so you have a feel of how the engine works, then Get the book Game Engine Architectures 2nd edition by Jason Gregory, it gives the ultimate description on how engines work at the low level and high level. Give your self a few months to a few years to fully understand games, game engines, programming and everything I just said as it takes a while to master these subjects. I started learning c++ two years ago and now I'm starting to write my first real software ( A 3D Rendering Engine). But if you stay focused and it's interesting to you time won't matter. These are my steps:

I cannot comment on the Sam's book as I haven't read it - however, I thought I would recommend 'Jumping into C++'. It's a great book - I don't know where you live so I'll post the amazon.com link http://www.amazon.com/Jumping-into-C-Alex-Allain/dp/0988927802

Edit: Originally posted as a reply in the comment section of the gamedev subreddit.

Disclaimer: I am no expert with unreal, i simply did some reading for the engine and watched some videos to see how things are working and to decide if i should be sticking with this engine. I post this comment in high hopes that anything i write here might help you.

You should spend some time in unreal's documentation manual and read the Blueprint section. Basically, the manual is a great source and also has some links to videos about how some stuff works.

Different surfaces for the player to walk on

You create assets (surfaces) on your 3d software and import them to the engine and then use them in the level editor OR you use the boxes (or any shape basically) given by the engine (adjust their height/width/etc) and create the surfaces you want by combining them (placing basic shapes in the right order to create more complex shapes, buildings, etc). If i recall correctly, they (unreal editor's shapes) come collision-ready.

A very basic building that the player can enter

Same as above. You either create a building in a 3d software and import it or use 4 walls using unreal's editor. In order to enter it (if you want to make it so that entering a building loads a different location which would work as the inside of the building) you would have to put some kind of "trigger event on collision/player overlap" (look up the exact naming) blueprint (google is your best friend, as well as the manual) that would take you to the other area.

Switches for the player to interact with

Same as above: level blueprints that will have trigger boxes in certain locations inside your level that you want to be interact-able. The video i posted above has something similar with a moving door inside the level i think, check it out. It might be from an outdated version but most of the things should work the same (learning the logic comes first, you can find the exact naming from the manual/google/forums).

adding sounds for footsteps and music

I have basically 0 experience with coding, should I learn coding at this stage, or will that confuse me even more?

Well, I think you would have an easier time with something like gamemaker studio but its not free (there is a free version but AFAIK its heavy limited). Unreal is a industry-focused engine and has it's quirks; also, it uses C++ which isnt considered the easier language to learn/use. BUT, in version 4.12 (latest) they have released an experimental "blueprints-to-C++" baker which is only gonna get better with each newer version. What does this have to do with you? You could learn the blueprints system (which is considered easier than learning to code in c++, especially for artists since it uses a more visual approach) and then, when the baker is finalised, use it to bake your blueprints to C++.
Why would you want to bake blueprints to C++? Well, its estimated by the unreal team that blueprints are around 20 times slower than coding your game in C++. So if you want a heavy mechanical game (with a lot of calculations etc), or a mobile game with a lot of features you can understand that making the whole game in blueprints would make the game slow. BUT, since you are a beginner you can easily make games by ONLY using the blueprints. Anyway, if you want to learn how to code (it's NOT that hard, really) i would suggest Alex Allain's excellent Jumping into C++

Should I use an Earlier version of Unreal so I know it will work, or use the most recent?

I would advice against that. Use the latest which is bug-free and simply learn the small differences for blueprint/naming between the version you use and the version the videos are using. If you learn the logic behind what they are doing with blueprints (which isnt hard if you pay a bit of attention and read the blueprint section of the manual) it will be easy to implement the same in the latest, feature-complete version. Take a look at unreal engine's youtube channel. They have a ton of blueprint videos. You can replicate a few of them to get a bit of taste of how blueprints work.

Take all of the above with a grain of salt. Like i said, i am not an expert in unreal engine so i might be wrong about some things (i dont think i am wrong about the topics discussed but still, i have to leave a disclaimer in case i am :P )
Hope it helps, have fun!